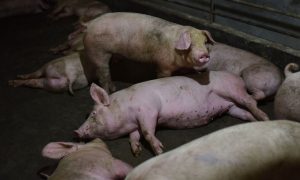 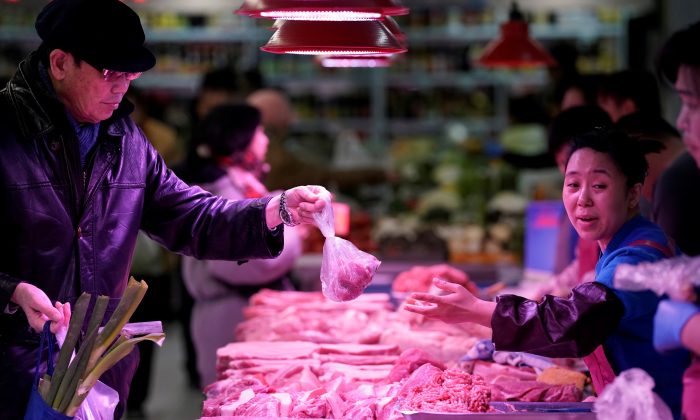 A resident gets pork from a vendor at a market in Beijing on Dec. 26, 2018. (Jason Lee/Reuters)
China Business & Economy

WUZHEN, China—China’s 2019 pork imports are set to double from last year to 2.2 million tons, a Rabobank analyst said on March 21, as African swine fever hits production of the meat in the world’s top hog market.

China has reported 113 outbreaks of the contagious disease since last August, though farmers and industry insiders say several outbreaks are going unreported.

African swine fever, which does not harm humans, has a high mortality rate in pigs and has no vaccine or cure.

Chinese pork production will fall by up to 20 percent in 2019, Oscar Tjakra, a director of food and agribusiness research at Rabobank, told a conference in the east of the country. China typically accounts for around half the world’s output of the meat.

That means local production this year of between 55 million and 61 million tons, Tjakra told Reuters on the sidelines of the event, down from last year’s 59 million to 61 million tons.

The United States agriculture department’s attache in Beijing has forecast pork production at 56.6 million tons this year, down 5 percent from 2018, with imports seen at 2.2 million tons.

China’s pig herd declined by 15 percent in 2018, according to Rabobank estimates, Tjakra said.

Pork production increased in the first three quarters of 2018, said Zhu Zengyong, associate professor at the Agricultural Information Institute of the Chinese Academy of Agricultural Sciences (CAAS), but declined significantly in the fourth quarter after the disease began spreading rapidly.

He cited official data issued by the statistics bureau, which shows the number of slaughtered hogs fell 1.2 percent in 2018 to 693.8 million heads.

The disease has totally disrupted the production plans of many major companies, added Zhu, with some halting expansion because of the disease.

Other speakers said the drop in output would hit feed demand hard.