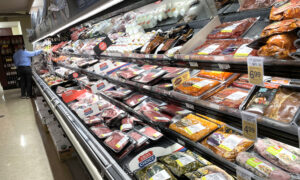 Gisela Sommer
biggersmaller
Print
When the entire infant population of a country is threatened by death through poisoned milk, the world should wake up. However, when tens of thousands of Chinese babies were sickened from melamine tainted milk, and who knows how many actual deaths, China’s regime basically got away with a slap on the wrist.

China’s deadly poison milk scandal surfaced at a time when the United States was highly vulnerable from a financial meltdown and in the middle of the presidential elections. As a result, the toxic milk scandal and other important developments in China have been downplayed or ignored.

Leaders and corporations around the world even went begging for China’s regime to save them financially.

Meanwhile, totally unreported was the news that 45 million Chinese citizens have quit the Chinese Communist Party and its affiliated organizations. No media other than the Epoch Times apparently finds this newsworthy.

Some China experts are saying that the milk scandal is only the tip of the iceberg, that most all the food inside China is contaminated. And that the true reason for the contaminated food is not unscrupulous farmers, but the culpable Chinese regime itself.

Sometimes we need to look at metaphors to fully understand the meaning of an incident. Milk is a metaphor for life. If the milk is being poisoned, it means there is a complete disregard for life.

Besides there being poison in the milk, it is the poisoning of the mind that is damaging Chinese society. A Chinese dissident once said that Chinese people are raised on wolf’s milk. He said the whole Chinese society is made to be corrupt by this regime which rules by threats and violence, instilling fear and compliance. Already in kindergarten, children are taught to deceive, he said, and people are two-faced and dare not say what they really mean or believe in. They have gradually been forced into a survival mode and to only look out for themselves.

The Mark of the Beast

The “tuidang” or quitting-movement in China started in late 2004 after the Epoch Times published an editorial series called the “Nine Commentaries on the Communist Party.” It has since inspired individuals in the highest levels of government to withdraw from the Party.  At the present time, the rate of withdrawals reaches 30,000 to 60,000 per day.

The Chinese people have been the victims not only of their own ruthless government, but also of the lack of support from the free world which clamors for favors from the Chinese regime.

The Chinese people have caught on to something: quitting the party! When they send in their quitting statements, many say they want to rid themselves of the mark of the beast.  We should support them.