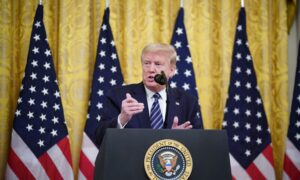 Trump: Canceling US Debt Held by China Is 'Rough Game'
0

China’s Planned Sell-Off of US Debt Could Backfire

The US Treasury Department declared that the budget deficit rose a record high of $3 trillion, adding to the $26.7 trillion in 2019, and this announcement followed reports from Chinese State media saying that China may dump its holdings of US treasuries, if tensions grow with the United States. We’ll take an in-depth look.

Meanwhile, China held a secretive launch of a Long March 4B rocket near midnight on September 26 in northern Shanxi Province. It was allegedly carrying two remote sensing satellites into orbit, which were HJ-2A and HJ-2B models. SpaceNews noted that it broke its standard protocol in the launch. While it rarely publicly announces its launches ahead of time, it usually publishes airspace closures a few days ahead of time, to make sure aircraft aren’t flying over the area. This time, however, it did not publish notices.

And Xi Jinping has allegedly been declared the “core leader” of the ruling Party, increasing his control over China. RFA reported that the group of Party leaders in the Politburo approved an amendment that names Xi as core leader, and he’s also now inscribed in the “Regulations on the Work of the Central Committee” which means he will hold power indefinitely, and finalizes a process that began with him eliminating term limits in March 2018.