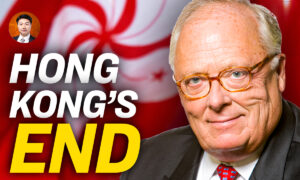 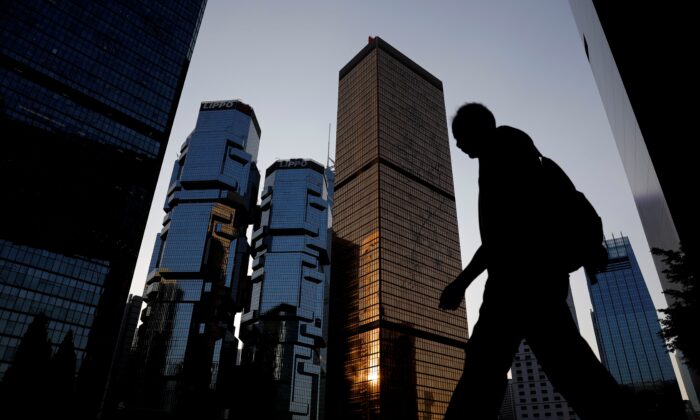 A man walks past buildings at a business district in Hong Kong, on Nov. 4, 2019. (Kim Kyung-Hoon/Reuters)
Hong Kong

HONG KONG—Global banks and other financial institutions in Hong Kong are scrambling to find out details of China’s planned imposition of an anti-sanctions law on the city, and trying to understand how it could impact their operations in the financial hub.

Beijing adopted a law in June under which individuals or entities involved in making or implementing discriminatory measures against Chinese citizens or entities could be put on an anti-sanctions list of the Chinese regime.

Financial firms are closely watching a meeting this week of the National People’s Congress Standing Committee, the highest organ of China’s rubber-stamp legislature, for signs on how and when similar legislation will be introduced in Hong Kong.

Hong Kong leader Carrie Lam said on Tuesday she did not have an explicit timetable for its implementation.

The move came as the U.S. government imposed several rounds of sanctions on Hong Kong and Chinese officials over Beijing’s suppression of the city’s freedoms under sweeping national security legislation.

Under the planned law, if financial institutions in Hong Kong implement U.S. sanctions, they may be exposed to legal risk in Hong Kong for doing so, financial sector executives and lawyers said.

“It is significant because international banks and financial institutions may find themselves caught between a rock and a hard place.”

Concerns have swirled over foreign financial institutions’ prospects in one of their most lucrative markets since Beijing’s implementation of the security law in the former British colony last year.

The anti-sanctions law now raises the specter of financial firms getting caught in the crossfire as sparring between the world’s two largest economies escalates.

While top executives at Hong Kong’s biggest financial firms have not aired their concerns in public, people familiar with the matter said there had been intense discussions internally on how to deal with it.

The executive, who declined to be identified due to sensitivity of the matter, said businesses were scrambling for information and Chan had made no effort to allay concerns despite repeated requests for meetings.

Offices of the Hong Kong government and Chan did not immediately respond to Reuters request for comment.

Hong Kong is the regional hub for many global financial firms, and accounts for the bulk of the profits for firms such as HSBC and Standard Chartered.

“Some of our financial institution clients are trying to plan out different scenarios ahead of the anti-foreign sanctions law, trying to decide what they would do if someone is sanctioned by the U.S. and subsequently run the risk of prosecution in Hong Kong for complying with such sanctions,” said Rod Francis, head of FTI Consulting’s financial crime practice.

“But while scenario planning is useful, there’s only so much of that kind of navel gazing you can actually do.”

A lawyer at one international law firm in Hong Kong said they had been inundated with calls regarding the anti-sanctions law but they were in no position to provide advice, given the complete lack of clarity.

“We’re waiting like everyone to see what is contained in the law … it’s hard to guess what will be in there,” one U.S. bank executive said, also declining to be identified.

Senior executives at two large foreign banks in China told Reuters they had not received any specifics about the law even in the mainland and their efforts to seek clarity from regulators had not been successful.

Some financial and legal professionals hoped Hong Kong would implement a watered-down version of the mainland law to make sure the city is able to maintain its finance hub status.

Paul Hastings’ Wu said a lot would depend on who will enforce the new rules and how. “That agency is going to determine, in practice, how wide the space between the rock and the hard place will be.”

By Alun John and Scott Murdoch