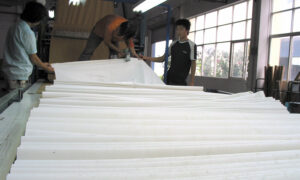 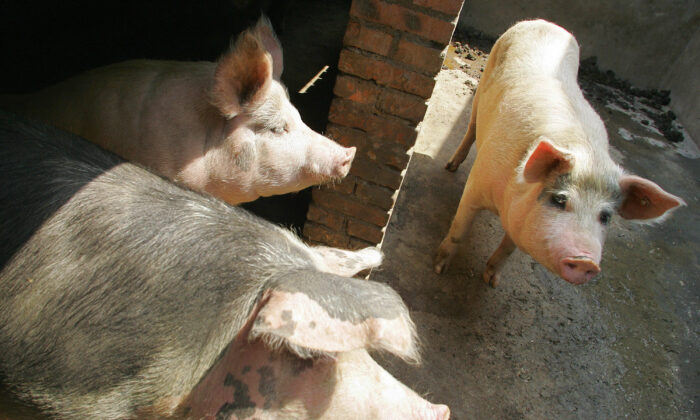 Pigs in a pen on the outskirts of Beijing.(Frederic J. Brown/AFP via Getty Images)
China Business & Economy

Pig farmers in China are finding themselves in a financial pickle as the country’s pork prices slump, while unfavorable regime policies are making it difficult for farmers to sustain their businesses.

Earlier this year, Zhao Kai (a pseudonym)—a hog farmer in Qiqihar, a city in the northern Heilongjiang Province—bought some piglets, each costing over 1,500 yuan (about $235). That investment has since become a burden, he told the Chinese-language Epoch Times in a recent interview.

“When the [hog] price started to decline [earlier this year], everyone thought the decline was a fluke, and the price would turn around in a few days. Nobody expected that it would drop so quickly,” he said.

Selling the pigs now would mean a loss of at least 600 yuan (about $94) per piglet, Zhao said, which is a difficult position because he must continue to spend money on feed. What’s more, if he cuts back on the pigs’ feed, they would certainly lose weight, which would affect their price in the future.

While hog prices fluctuated last year, they stayed at a high level, according to Chinese market data. However, in January, the prices of hogs and pork began to decline, leaving farmers like Zhao hoping for a resurgence in prices.

The swine industry in China, the world’s biggest consumer and producer of pork, was devastated when the African swine fever hit in August 2018. The deadly virus eventually spread to all 31 provinces, autonomous regions, and municipalities in China by April 2019.

Chinese authorities responded by culling millions of hogs, sending hog prices skyrocketing in mid-2019. In September of that year, the NDRC and China’s Ministry of Agriculture and Rural Affairs began handing out one-off subsidies to pig farmers to build new farms or expand their existing operations, in an effort to boost the country’s pork supply, according to China’s state-run media.

Other state-approved measures announced that month included ordering Chinese banks not to cut loans to pig farmers and slaughterhouses, according to China’s state-run media.

Xinhua, in an article published on May 25, attributed declining pork prices to several reasons, including the continued recovery of the country’s hog production. Another reason was lower consumer demands due to warmer weather.

Beijing recently began to take forceful measures to curb the expansion of its swine industry.

“Policies are being tightened now, unlike previous years when the [Chinese] government encouraged and supported [hog] farmers. Since there is no pork shortage anymore, regional governments have begun to demolish pig pens in the name of environmental protection,” Zhao said.

On May 25, China’s state-run broadcaster CCTV reported that Chinese authorities began cracking down on problematic agricultural tent farms, which are sometimes used by hog farmers to raise their pigs.

According to Chinese news portal NetEase, several provincial authorities, including those in Guangdong, Jiangxi, and Shandong, have shut some hog farms in their regions in May, while ordering other farms to close down this month.