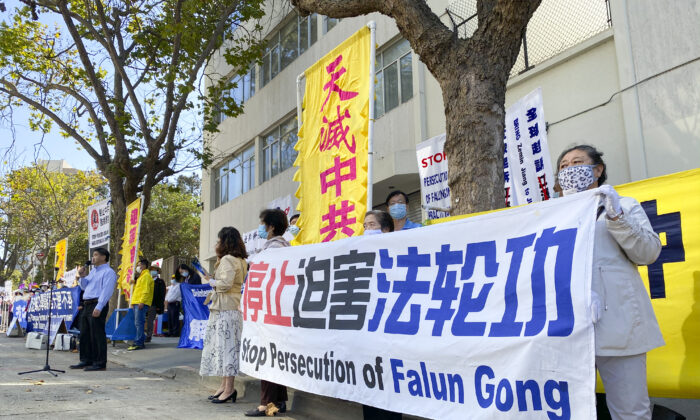 Protesters stand at the Chinese Consulate in San Francisco to raise awareness about the persecution of Falun Gong in China on Sept. 21, 2020. (Ilene Eng/The Epoch Times)
China Human Rights

China’s Persecution of Falun Gong Continues, With Over 1,000 Arrested and Harassed in October: Report

The Chinese Communist Party (CCP) is continuing its nationwide persecution of adherents of Falun Gong, a traditional spiritual practice that the regime has heavily suppressed since 1999.

According to October statistics reported on Nov.12 by Minghui.org, a U.S.-based website that tracks the persecution of Falun Gong in China, police unlawfully arrested and harassed 1,077 Falun Gong practitioners in the month of October in 139 cities across 27 provinces and regions. Courts across the country sentenced 65 Falun Gong practitioners to jail for their faith. Chinese human rights lawyers have said such prosecutions are illegal, as it violates China’s constitution that guarantees freedom of belief.

While China celebrated the traditional Double Ninth Festival in October, which emphasizes respect for seniors, 92 elderly Falun Gong practitioners aged over 65 were abducted from their homes and harassed, including two above the age of 90. Another 19 elderly Falun Gong practitioners also aged over 65 were unlawfully sentenced to jail, the oldest being 80 years old.

The report also detailed the Chinese regime’s financial persecution. In October, the CCP’s police and courts extorted a total of 417,840 yuan ($62,300) in cash from abducted Falun Gong practitioners. Meanwhile, 34 people’s pensions were suspended without grounds.

On the evening of Oct. 27, the National Security Team of Hunan Province and Changsha City, alongside local district police (known as public security bureaus in China), abducted 14 Falun Gong practitioners and illegally raided their homes.

Details of representative cases of persecution of Falun Gong practitioners in October were released.

The Case of Ma Zhenyu

Zhang Yuhua, the wife of detained Falun Gong practitioner Ma Zhenyu, explained her husband’s plight to President Donald Trump during an event on religious freedom held in Washington on July 17. Zhang herself survived torture while being detained inside a labor camp.

On July 20, Secretary of State Mike Pompeo issued a statement condemning the CCP’s persecution of Falun Gong. Citing Zhang and her husband’s case as an example, he demanded that the CCP immediately stop the torture and abuse of Falun Gong practitioners and release those who have been imprisoned for their beliefs.

Although this case has received great attention from the international community, Ma has not regained freedom despite having fully served his sentence.

Ma was a former radar engineer of the Nanjing 14th Research Institute of the Ministry of Information Industry of China. He was sentenced to three years in prison for sending letters to CCP leaders about Falun Gong calling for an end to the communist state’s persecution. His sentence ended on Sept. 19. The Suzhou Prison in Jiangsu Province stated that Ma was handed over to the Nanjing police bureau that day. Zhang said that she has not been able to contact her husband so far.

Ma is now reportedly incarcerated at a police station in Suojin Village, Xuanwu District of Nanjing city, according to Minghui.org. He is being confined in a room next to the mailroom at the police station. Officers have also pressured Ma’s family, including his 80-year-old mother, demanding that they not contact his wife in the United States.

The Minghui report also detailed the case of Shanghai engineering expert Xu Yongqing, who is also a Falun Gong practitioner. After her two-year incarceration at the Hongze Lake Prison that ended on Nov. 28, 2019, Xu has been continually harassed, monitored, and persecuted by local authorities.

In December 2016, Xu Yongqing submitted an application for “information release” from China’s Ministry of Public Security, asking whether its document “Notice on Certain Issues Concerning the Identification and Banning of Heretical Organizations” was still valid.

The document listed 14 CCP-labeled “heretical organizations,” which did not include Falun Gong.

In the absence of a reply from the Ministry of Public Security, Xu filed a lawsuit with the Beijing Second Intermediate Court in May 2017, suing the ministry for “administrative inaction.”

The ministry then ordered the Shanghai police bureau to put pressure on Xu to withdraw the lawsuit, but he refused.

On Nov. 29, 2017, Xu was kidnapped by local and national police officers in Hanjiang District of Yangzhou City. He was sentenced to two years imprisonment and fined 5,000 yuan ($740) by a local court.

He was beaten and injured in prison. After he was released, he was unemployed due to poor health. Xu and his wife rented a house in the countryside, but they were continually monitored and harassed by local authorities, according to a Minghui report.

During the Mid-Autumn Festival in early October, Xu returned to his hometown in Zhejiang Province to visit his mother. On Oct. 11, he received a message informing him that all the belongings in his Shanghai house had been moved to a warehouse belonging to the Party committee of Yanxing Village, though he had already paid rent to the landlord for October and his lease didn’t expire until Oct. 31. Xu immediately returned to the rented home in Shanghai and found that the door lock had been replaced. He had to spend the night in a small hotel nearby.