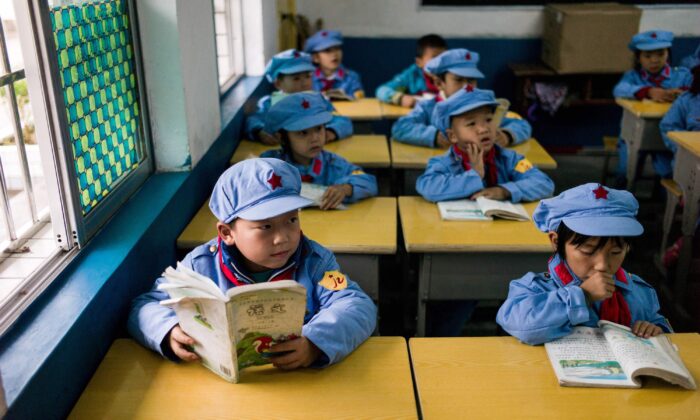 Students read in their classroom in the Yang Dezhi "Red Army" elementary school in Wenshui, Xishui County in Guizhou Province, China on Nov. 7, 2016. In 2008, Yang Dezhi was designated a "Red Army primary school"—funded by China's "red nobility" of revolution-era Communist commanders and their families, one of many such institutions that have been established across the country. Such schools are an extreme example of the "patriotic education" which China's ruling Communist party promotes to boost its legitimacy—but which critics condemn as little more than brainwashing. (Fred Dufour/AFP via Getty Images)
By Bitter Winter

After the Tiananmen Square protests 30 years ago, the Chinese Communist Party (CCP) launched a patriotic education campaign nationwide to instill national pride and build a generation of future communists loyal to the country’s leadership. Amid pro-democracy protests in Hong Kong, China’s communist regime is accelerating the campaign to impart nationalist fervor through indoctrination, starting from a very young age.

Toddlers Swear Allegiance to the Party

“No matter where I was born, the blood of my motherland is always flowing inside me. No matter if I am alive or dead, this will never change. For all this, I commit to love my motherland,” toddlers were following their teacher swearing an oath to China and its leadership. The pledge was organized during a flag-raising ceremony in a kindergarten in Yongxiu County under the jurisdiction of Jiujiang City in the southwestern province of Jiangxi on Sept. 25.

The school is organizing activities like these, hoping to instill in children nationalist pride and loyalty to the country and the Communist Party.

“The government asks schools to subject our kids to ‘red’ education and indoctrination because they want to cultivate successors for the Communist Party,” one of the parents expressed her dissatisfaction with such activities.

No matter how opposed to red indoctrination parents are, they cannot do anything to remove their children from an ideologically-charged educational environment. In many cases, such indoctrination of very young minds results in children developing a radical worldview; they become unable to think independently.

“I’ll kill Japanese with a pistol,” said a little boy holding a wooden toy pistol in hand during a parent-child educational activity organized by Jinshan Kindergarten in Jiangxi on Nov. 1.

The CCP has been cultivating the sentiment of patriotism and nationalism among young generations by impressing them with “the brutality of foreign invaders” who occupied China’s territories throughout history.

“Nothing positive comes from indoctrinating children with hate sentiment at such a young age,” one of the parents expressed her concern.

“[The Party] just educates young children in such a deceptive manner and incites them to be against Japan, America, and even the entire West,” a Chinese netizen commented online last year. “It wants to educate them as a new power of the Boxers and inflame hatred towards foreign countries,” he added, referencing to the turn-of-the-century Boxer Rebellion (1899-1901), organized by a secret Chinese society, the Boxers or the “Fists of Harmony and Justice,” which was fighting against colonialism and Christianity.

In late October, kids wearing Red Army uniforms were shouting patriotic slogans, like, “A red heart faces the sun and follows the Party” in a Jiangxi kindergarten during an activity called “Military-Civil Production.” The children’s parents were also asked to wear costumes, acting as soldiers, workers, and peasants who “plow the field, grow the grain, and fertilize the crops.” The activity was dedicated to the CCP’s mass campaign, launched during the Second Sino-Japanese War (1937-1945) when troops and civilians were encouraged to work together in China’s wastelands to grow grain.

Similar activities are organized in kindergartens throughout China. The official media outlets on the mainland claim that through such events, children are taught how hard the heroes of the proletarian revolution fought “for the beautiful life they enjoy today, pass down the excellent traditions, and devote themselves to the endless struggle of building a stronger, more prosperous and beautiful motherland.”

But not everyone agrees with this education. A parent told Bitter Winter that CCP’s “extreme patriotic education is the evilest forced indoctrination in the world.”

A teacher working at a pre-school said that in the past, she would teach children traditional songs, like “Wash Your Hands” and “Let’s Have Dinner.” “But it is different this year; the red songs have become compulsory,” the teacher complained. “All kindergartens, private or public, are following instructions from the Central Committee of the CCP, without exception, to teach kids red songs. Governments at all levels demand that all schools teach children patriotic songs from a young age. This is a state policy.”