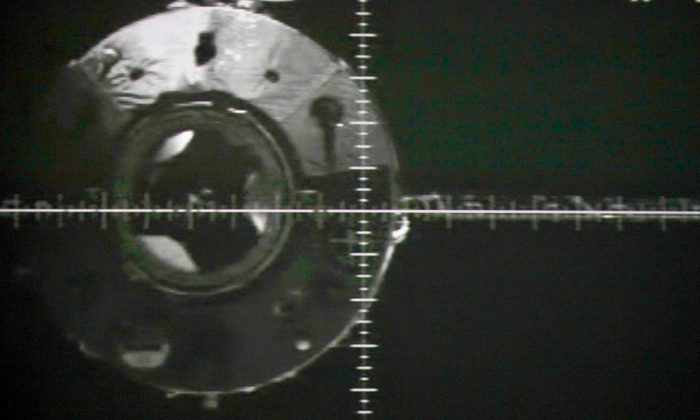 A photo of the giant screen at the Jiuquan space center shows the Tiangong-1 module via a camera in the Shenzhou-9 spacecraft before a docking on July 18, 2012. (STR/AFP/GettyImages)
International

China’s Out of Control 19,000-pound Space Station Crashing to Earth in March

A 19,000-pound space station that the Chinese regime admits to having lost control of in 2016 will crash land somewhere on Earth this March, experts predicted.

The Tiangong-1 space station was launched in September 2011. It is China’s first space station. It hosted manned space missions twice in its lifetime. Chinese taikonauts, in the six years since the station was sent into orbit, have spent a total of 24 days aboard, according to data from Aerospace.

Aerospace also reported that the last time scientists were able to raise the altitude of the space station before its current ongoing descent was in December 2015, and that it has been orbiting uncontrollably since at least June 2016.

Aerospace made the prediction on Jan. 3 that the space station would re-enter Earth’s atmosphere mid-March, give or take two weeks. About two-thirds of the Earth’s surface area is likely to be struck by what is left of Tiangong-1 once it goes through Earth’s atmosphere.

Although debris orbiting Earth falls back to Earth often, it is usually much smaller and rarely a danger, often disintegrating before landing. But because of its size, even after Tiangong-1 breaks up during re-entry, debris that remains held together could weigh thousands of pounds, according to The Verge.

Aerospace advises not to touch any debris from the space station after it crashes, because of the toxic substance, hydrazine, that could survive re-entry. The vapors from the substance are also toxic, and precautions should be taken not to inhale them.

The problem, as mentioned to Newsweek by European Space Agency researcher Tim Flohrer, is that nobody knows how much of the toxic chemical to expect. That information is kept private, along with other details that could prepare the public for the crash, including the design of the ship.

“I am not aware of any released information addressing these points,” Flohrer told Newsweek.

The Chinese National Space Administration doesn’t release such details, even when they are a global safety hazard. In 2007, the Chinese regime’s space agency shot down one of its own satellites from space. Although U.S. officials detected the incident on Jan. 11 of that year, officials from the Chinese regime waited 12 days before admitting responsibility after first refusing to speak on it.

Space.com wrote that “The satellite’s destruction is now being viewed as the most prolific and severe fragmentation in the course of five decades of space operations.” It resulted in a huge cloud of space debris, a threat to other satellites and to space flight. The International Space Station and those on board were also put at risk from the debris cloud.

The incident was also taken as a military threat. The Chinese regime’s space program is run by its military. The regime’s willingness to cause this kind of destruction in space without warning was seen as a threat to satellites belonging to countries around the globe, The Washington Post reported.

“It’s unfortunate that China is going down this path,” said a U.S. official after the incident, via the Post. “No one has done this in over 20 years, and in that time, international cooperation in space has come so far. It is a bustling commercial, scientific and research arena. This sort of thing is such a throwback to the Cold War.”