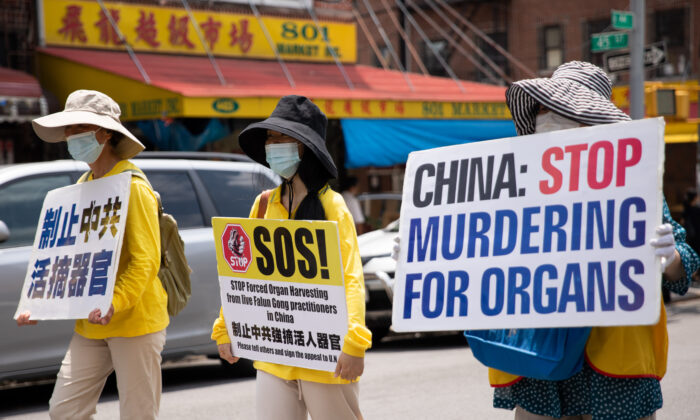 Lawmakers and experts will spotlight China’s industrial-scale murder of prisoners of conscience for their organs in an upcoming webinar commemorating International Human Rights Day.

The event, to be held virtually at 10 a.m. EST on Dec. 10, will explore how the United Nations’ Universal Declaration of Human Rights has “failed to protect humanity from this abominable crime,” according to the event invite. Doctors Against Forced Organ Harvesting (DAFOH), a Washington-based advocacy group, is hosting the webinar.

The Chinese regime has been committing forced organ harvesting from prisoners of conscience for years, and on a substantial scale, concluded the China Tribunal—an independent people’s tribunal chaired by Sir Geoffrey Nice—in its final judgment (pdf), released in 2019.

The China Tribunal report stated that it was “certain” the organs are being sourced from imprisoned Falun Gong adherents and that they’re “probably the principal source.” Falun Gong, also known as Falun Dafa, is a spiritual discipline involving meditative exercises and moral teaching based on three core principles, truthfulness, compassion, and forbearance. Adherents of the practice have been brutally persecuted by China’s communist regime since 1999.

The webinar invite states that as the world approaches the 73rd anniversary of the Universal Declaration of Human Rights, it faces “exactly what the Declaration was designed to prevent—the egregious slaughtering of Falun Gong practitioners and other prisoners of conscience in China for their organs.”

Allegations of the Chinese Communist Party (CCP) killing Falun Gong practitioners to sell their organs for transplant first emerged in 2006. Since then, numerous investigations have confirmed grisly details of this atrocity.

Organ harvesting is extremely lucrative for the CCP. During a Nov. 29 hearing before the European Parliament’s Subcommittee on Human Rights, Nice said the Chinese regime could obtain up to half a million dollars from each victim’s body.

The CCP’s systemic campaign of repression against Falun Gong practitioners has been labeled a “cold genocide” by experts, due to the regime’s gradual and persistent efforts to annihilate the faith group in the past two decades. This term is used in contradistinction to a “hot genocide” which aims to eliminate a group in a short period.

“How then do we respond to such an egregious violation?” asks the event invite.

According to Dr. Torsten Trey, executive director of DAFOH, when dealing with the CCP, the answer lies in not holding back.

“Appeasing China by chiming into the silence of basic human rights, has never generated any change,” Trey told The Epoch Times. “Instead, the world needs to stand together, be determined, and demand from China to stop forced organ harvesting from living Falun Gong practitioners.”

The global webinar is currently open for registration.

Guest speakers include global lawmakers, such as U.S. Rep. Scott Perry (R-Pa.),  Canadian MP Garnett Genuis, and British Lord Philip Hunt. The latter two are proponents of legislation that would make it illegal for Canadian and British citizens, respectively, to be recipients of harvested organs from Chinese prisoners of conscience.