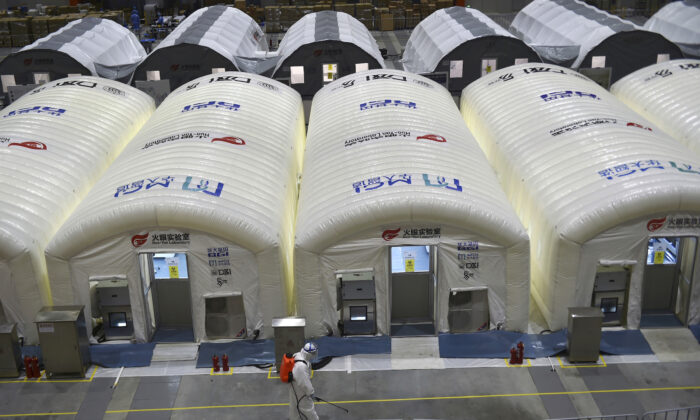 A worker disinfects the floor outside the inflated cabins at the pop-up Huo-Yan Laboratory set up to test samples for COVID-19 virus in Nanjing in east China's Jiangsu Province on July 28, 2021. (Chinatopix/Via AP)
Economy

A few weeks after Shanghai’s reopening from its three-month lockdown, another outbreak of Omicron variant BA.5 occurred in Shanghai City, Anhui Province, and other areas. As of July 12, there were 804 areas in mainland China designated as medium or high-risk due to active COVID-19 cases. The Yangtze River Delta industrial area, including 73 high-risk areas, is also affected, with 34 located in Anhui Province and 39 in Jiangsu Province.

As reports of new cases emerged in Shanghai on July 11, some neighborhood committees advised residents to start preparing 14-day stockpile of supplies.

In Pudong New District, a seven-day lockdown management in certain neighborhoods was enforced two days earlier on July 10, with all residents required to do four screenings within the week-long lockdown period.

Anhui is an important economic hub in the Yangtze River Delta region. From June 26 to July 6, Sixian County in northeastern Anhui Province reported more than 1,000 cases of infection. Starting from July 1, local authorities imposed stay-at-home control over Sixian County and the nearby Lingbi County. When new cases were reported on July 11, the local area continued to adhere to “non-essential, non-moving” isolation and control. Official have not said when the lockdown will be lifted.

There are also outbreaks in many areas of Jiangsu Province. On July 11, new local cases emerged in Wuxi City, Suzhou City, and Lianyungang City. Ganyu District of Lianyungang City imposed a snap lockdown on the morning of July 11, and residents had to queue up for PCR tests in the rain.

The GDP of Jiangsu Province ranks second in China, and it is also the main production center of solar energy products in the world. China’s solar cell industry enterprises are mainly located in the eastern coastal areas of the Yangtze River Delta, with most concentrated in Jiangsu Province in eight solar industrial parks. As the epidemic continues to spread again, global solar energy product supplies may be affected.

Yiwu town in Zhejiang Province is the world’s largest wholesale market for small commodities. Also affected by the epidemic, Yiwu Airport announced on July 3 that it was temporarily canceling all flights to Beijing. The Epoch Times noticed that the flights have not resumed as of press time.

Xiao Di (pseudonym) from Ningbo City of Zhejiang Province told The Epoch Times, “The authorities treat the epidemic as very high priority. Even if there are only a few infected people, all residents throughout the city have to take the nucleic acid test. If residents need to go to hospitals, banks, and other public areas, they must provide nucleic acid test result taken within 48 hours. The key is that lockdown measures have too much impact on the operation of enterprises. For example, Beilun Port in Ningbo is the fourth largest port in the world, so many employees were taken away for quarantine during the last epidemic, causing supply chain disruptions and port congestion. If all employees stop working, how could you avoid port congestion?”

Hu Jun (pseudonym) from Xiaoshan District of Hangzhou City told The Epoch Times that even if work and production resumes soon, the epidemic has had a huge impact on small and medium-sized enterprises.

“Many companies have gone bankrupt, some business owners have gone to find another job, and many people have lost their jobs. E-commerce and logistics companies have strict nucleic acid requirements, and those who have tested positive or have been in the quarantine cabin won’t be considered when they apply for a job position in these industries.

“Moreover, migrant workers who come to Hangzhou from Shanghai are all told to go back to Shanghai; they are generally not accepted in other areas,” he said, citing the tendency to now consider people from Shanghai as potential virus carriers due to the strict lockdowns in the city earlier this year.

“When Xiaoshan District was placed under lockdown a few days ago, the news outlets kept silent; but when the lockdown was lifted, it was opened with great fanfare,” Hu said.