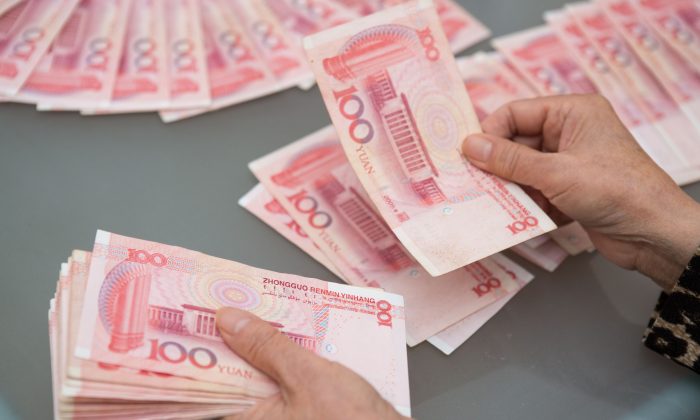 China’s currency tumbled in offshore trading last week to its lowest level in a month, as traders speculate that further monetary easing may be in store after disappointing economic growth readings last week.

The offshore yuan (CNH) declined to 6.39 per dollar, compared to 6.35 per dollar for the onshore currency (CNY), on Oct. 23. That’s a spread of around 400 basis points, the biggest in more than a month.

CNY represents money traded within China and under its tight currency fix restricted to a 2 percent maximum movement per day. CNH yuan, which trades outside of China and is more free-floating based on supply and demand, is usually viewed as a truer picture of the yuan’s worth.

The existence of this CNH-CNY gap is one of the reasons the International Monetary Fund has been reluctant to include the yuan in its currency basket.

While China’s official third-quarter GDP reading of 6.9 percent was higher than expected, independent analysis pegs that rate much lower based on consumption and spending figures.

China’s decision to cut interest rates once again last Friday was a smoking gun that the economy may be weaker than reported. The interest rate was cut by 25 basis points, the sixth time the People’s Bank of China (PBOC) has lowered rates in the last year.

China also slashed its banks’ reserve requirement ratio, allowing more credit to enter the economy. The decision was due to increased downward pressure on the nation’s economy, according to a statement on the PBOC’s website.

This move is an easy one, and helps on two fronts. It lifts the savings rate ordinary households earn on their bank deposits, which increases household wealth.

Two, it can create more competition among Chinese banks, particularly the smaller ones. Higher interest payouts also encourage banks to lend to small- and medium-sized businesses, whereas in the past money tended to channel to large, state-owned enterprises.

Last Friday J.P. Morgan analysts estimated that capital outflows during September were between $130 billion and $140 billion. Estimates by Bloomberg, which count dollar holdings by exporters and direct investment recipients, are closer to $194 billion.

Such pressures to sell the yuan, coupled with investor speculation that the PBOC may devalue the currency further in the face of weak economic growth, have sent the yuan tumbling in offshore markets.

Earlier in the month, asset manager PIMCO wrote that it expected further yuan devaluation by the Chinese central bank.

“We expect private capital expenditures and property prices to weaken further, risking a negative spillover to employment and consumer spending. We expect to see a significant monetary policy response from the People’s Bank of China,” PIMCO wrote.

If offshore yuan trading is any indication, a monetary policy response may be imminent.