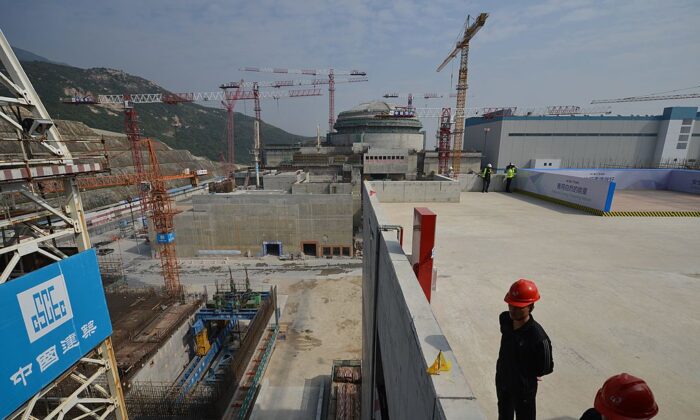 Although the Chinese authorities recently denied leaks at a nuclear power plant, China’s ambitious “nuclear power dream” needs urgent global attention, according to Chinese scholar and energy expert Nieh Sen. The Chinese regime continues to ignore safety issues while it fulfills its dream in becoming the top nuclear energy producer in the world, he warned.

On June 14, CNN reported a leak at the Taishan Nuclear Power Plant in Guangdong Province. The French company Framatome, which partly owns and operates the nuclear plant, allegedly warned the Chinese safety authorities about an “imminent radiological threat” and accused them of “raising the acceptable limits for radiation detection” outside the plant so it wouldn’t be shut down, according to documents obtained by CNN. The U.S. government is currently assessing the situation.

Beijing denied the allegations. In response to the CNN report, the head of the National Nuclear Safety Administration of China’s Ministry of Environment said in a press conference on June 16, “The increase in the level of radioactivity in the first circuit of unit 1 [nuclear reactor] is mainly related to the breakage of fuel rods,” but “the results of radiation monitoring around the Taishan nuclear power plant show that there is no radiation abnormality in the environment around the plant” and “no leakage has occurred.”

However, the reassurance from the Chinese authorities isn’t enough to quell public concerns over safety hazards of nuclear power plants in China, and the people know that Beijing wants to achieve its “nuclear power dream,” Nieh Sen, professor at the School of Engineering of the Catholic University of America, told the Hong Kong edition of The Epoch Times in a recent interview.

Nieh said that for the Chinese Communist Party (CCP), nuclear energy is mainly a political tool that only serves to benefit the regime, and the safety and security of the people is the last priority of the CCP.

In pursuing the ambitious “nuclear power dream,” the CCP has not only developed nuclear technology in China but also exported its nuclear technology, as well as its influence, through its Belt and Road Initiative (BRI, also known as “One Belt, One Road”), he added.

China May Become the No. 1 Nuclear Energy Country by 2030

Since then, the CCP has gradually accelerated the development of nuclear power plants.

By the end of 2020, China’s installed nuclear power capacity has reached 49.89 GW, ranking third in the world behind the United States and France, state-run media Xinhua reported in April.

In terms of nuclear power generation, China ranked second in the world in 2020, with 366.2 TWh (terrawatt-hour), according to the China Nuclear Energy Association.

In its 14th five-year economic development plan, which was introduced in October 2020 at the fifth plenary session of the 19th Central Committee, the CCP stated that China’s nuclear power installation in operation would rapidly increase to 70 GW by 2025 and 120 GW by 2030.

Currently, there are 62 nuclear power units in China, of which 49 are in operation, mainly in the coastal areas.

In the meantime, the United States, the world’s largest nuclear power country, reached its peak of 102 GW of installed nuclear power units in 2012; its first nuclear unit went into commercial operation in 1969, and has since declined as some units have been retired. By the end of 2020, U.S. nuclear capacity has fallen to 96.5 GW, according to the U.S. Energy Information Administration (EIA).

At this rate, China could overtake the United States as the world’s top nuclear power producer by 2030, according to Forbes.

Nuclear energy is a strategic industry for the CCP, as China has exported its nuclear energy technology to other countries in recent years.

On Feb. 26, 2015, Wang Xiaotao, deputy director of the Development and Reform Commission of China, said at a press briefing that Beijing would promote the export of railroads and nuclear power, and develop the international market for major equipment in the railroad and nuclear power industries.

On Jan. 11, 2016, the central government posted on its website: “In our country’s ‘One Belt, One Road’ strategy [Belt and Road Initiative], nuclear power, like high-speed rail, has the characteristics of high core technology threshold, high initial investment, high industry barriers and scarce industry licenses, and is a strategic industry that the country focuses on supporting.”

“For every nuclear power unit exported, more than 80,000 sets of equipment are needed and more than 200 enterprises are involved in manufacturing and construction, creating about 150,000 jobs and an investment demand of 30 billion yuan [about $4.63 billion]. Experts estimate that if China can obtain 20 percent of the market share of countries along the ‘Belt and Road,’ i.e. about 30 units for overseas markets, it will directly generate nearly 1 trillion yuan [about $154 billion] of output value and create 5 million jobs.”

According to the World Nuclear Association, China is currently exporting its nuclear technology to 12 countries, including Pakistan, Romania, Argentina, the United Kingdom, Iran, Turkey, South Africa, Kenya, Egypt, Sudan, Armenia, and Kazakhstan. But they are all at different stages of cooperation with Beijing.

The Chashma nuclear power plant units 3 and 4 that China exported to Pakistan are already in operation, while the units in Romania and Argentina are in the planning stage.

Kenya and Egypt have signed MOUs or formal agreements with China, while the Armenian project is still under negotiation.

However, the development of Hualong One, CAP1400, and Chinese nuclear plants were based on foreign technologies, according to a report by Xinhua.

“Based on the French design of 157 fuel assemblies, 20 more were added to form the ‘177 fuel assemblies,’ which became the main feature that distinguishes China’s third-generation nuclear technology from foreign technologies, and is the soul of Hualong One,” Xinhua said.

The report also said, “In addition to the self-designed Qinshan I nuclear power plant, China also cooperated with France to build the Daya Bay Nuclear Power Plant, following the route of ‘introduction, digestion and absorption.’ So, the M310, a more advanced second-generation improved pressurized water reactor, became the first target for China’s nuclear power industry to learn and absorb.”

The CAP1400 nuclear reactor is based on the U.S. Westinghouse AP1000 technology. According to the World Nuclear Association, the State Nuclear Power Technology Corp (SNPTC), a subsidiary of the National Power Investment Group, and Westinghouse reached an agreement that Westinghouse would transfer technology to SNPTC over the first four AP1000 units so that SNPTC could build the following units on its own.

In 2014, SNPTC and Westinghouse signed another agreement to further develop the AP1000 and CAP1400 technologies.

CCP Promotes Nuclear Energy Under the Guise of Global Cooperation

The concept of building a “human community with a shared future” came from Xi Jinping in 2012 at the CCP’s 18th National Congress.

However, the CCP is pushing ahead with its nuclear power projects without taking safety issues into full consideration.

China’s vigorous efforts to develop nuclear energy are in stark contrast to those of Taiwan. Professor Nieh Sen said that unlike the Chinese regime, Taiwan prioritizes the safety of its people.

In 2000, Taiwan implemented its “nuclear-free” energy policy. In Article 23 of the Basic Law on the Environment, Taiwan authorities stated that “the government should formulate a plan to gradually achieve the goal of “a nuclear-free homeland, and should strengthen nuclear energy safety control, radiation protection, radioactive material management, and environmental radiation detection to ensure that people’s lives are free from radiation hazards.”

Nieh mentioned that the United States has made little effort to develop nuclear power units in the last 50 years since the nuclear disaster at Three Mile Island in 1979.

He also pointed out that the Taishan Nuclear Power Plant was built in 2009 using the European Evolutionary Power Reactors (EPRs). This technology was also used in the construction of the Olkiluoto 3 unit in Finland in 2005 and the Flamanville nuclear power station in France in 2007. However, both the Finnish and French plants are currently on hold due to technical and safety standard issues.

Some media outlets reported that the same problem existed in the pressure vessel of the Taishan Nuclear Power Plant. In 2016, Chinese news portal Sina revealed that two EPR reactors at the Taishan plant were reported by the State Nuclear Safety Administration as having failed pressure vessels. At the same time, several media outlets reported that the power plant’s French supplier Framatome (formerly known as Areva) said that 400 components were improperly tested for safety.

However, in 2018, while the EPR units in Finland and France were stalled due to safety concerns, the Taishan power plant began its commercial operation.

He emphasized, “At such a time, it is important to know the truth. What is the operational status of the nuclear power plants in China? What is the safety level? All these need urgent global attention.”