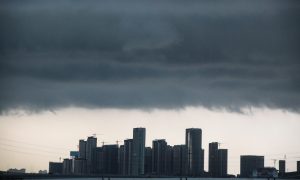 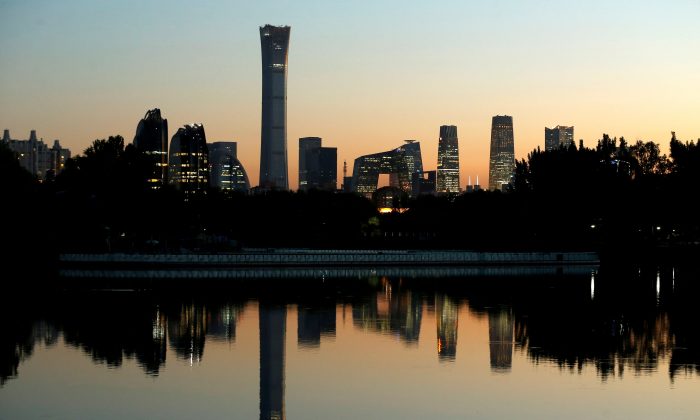 The cityscape of the Beijing Central Business District, or Beijing CBD, is reflected in a pond during sunset on Oct. 17, 2018. (Thomas Peter/Reuters)
Thinking About China

Can China’s rise to global dominance really be “managed” by rules and trade agreements?

Is a new international order based on China’s economic and political leadership a good idea? Would it lead to a more free and prosperous world?

That’s the recommendation according to business and political “experts” attending the Credit Suisse Global Supertrends Conference in Singapore this week. They point out that China’s rise is coinciding with the decline of both European and American global economic and military influence. Therefore, their argument goes, the global community should take this opportunity to both embrace China’s rise and to re-establish global trade norms.

Who Really Believes This?

Rules, it is assumed, will keep China from cheating. This is the thinking of people such as former American ambassador to the European Union Anthony Gardner. It is utterly naïve at best and at worst, it’s self-defeating and much more.

The so-called experts seem to forget that China has gotten where it is today by breaking all the rules of the international system for the past 40 years. Why stop doing what’s worked for decades? By exploiting the openness of Western economies, China has destroyed entire industries in the United States and Europe, leading to trillions of dollars’ worth of jobs and factories relocating to China as well as massive amounts of technology and IP theft.

And now the influencers in international business think China ought to lead the world into forming a new world order? Just what kind of international order do they think would be put in place? In fact, one doesn’t have to look very hard to see what a Chinese-led world order would look like.

Unlike other communist regimes, China has embraced capital formation from a top-down perspective while subsidizing productivity through endless lending cycles and absorbing the most successful ones into state ownership. Rather than adopting the openness of Western economies, it has leveraged its huge market potential and comparative advantage as a low wage manufacturer with relatively few labor or environmental regulations to rapidly grow into an economic and military competitor on the world stage.

But instead of trade leading to a more free and open society, as the experts assumed would happen, it had the opposite effect. China’s newfound power has led the Chinese Communist Party (CCP) to exercise greater exploitation abroad and social repression at home. In other words, the CCP has reinvented China—with immense assistance from the West—into a neo-fascist expansionist power.

The signs are there for all to see. China’s rampant exploitation of the international system and the financial subjugation it imposes on weaker trading partners tells us exactly what a Chinese-led world order would look like. In fact, they’re building that new order right now.

For example, take China’s One Belt One Road Initiative (OBOR, also known as Belt and Road). For all intents and purposes, it’s a Chinese version of Imperial Japan’s Greater Co-Prosperity Sphere of the 1930s. The similarities between interwar Japan and China today are striking. In the preceding years of World War II, Japan lacked the necessary raw materials and natural resources—including oil—to sustain its economic model.

What’s more, its social and political arrangement were based upon worshipping the emperor and antipathy toward the West. To support its expansionist goals and assuage its fear of falling subject to the Western powers, Japan pursued an aggressive colonization policy throughout Southeast Asia. Of course, the benefits were all one-sided.

As the de facto emperor of China, Chinese leader Xi Jinping has cultivated much of the same cultural tendencies. More importantly, however, are the effects of China’s OBOR on its weaker trading partners. But unlike Japan, China invades economically rather than militarily.

Although the process varies, the outcomes essentially remain the same. China promises its OBOR partners’ infrastructure and other economic development and then saddles the countries with debts they can’t possibly repay. China then takes ownership of the leveraged assets and ravages the environment of the host country, harvesting the natural resources that it so desperately needs.

This is happening in Africa, Asia and South America, a much greater co-prosperity sphere than Imperial Japan could ever have imagined.

A Blueprint for Technology Domination

The OBOR shows just how China plans to deal with the weaker nations of the world, those without fully developed, technologically advanced economies. But for advanced economies, China’s new world order plans are spelled out in the Made In China 2025 program. Again, it involves following some of Japan’s past behavior, this time its adversarial trade strategies from the 1970s and ‘80s.

In a nutshell, the Made In China 2025 program involves the continued theft of advanced technology from Western firms in 10 key verticals. The goal is to reverse the trade flow from west to east by undercutting foreign competition on price, making it tough to compete. The endgame is the destruction of European and American technological industrial bases, leaving China in top position in artificial intelligence, robotics, microprocessors, pharmaceuticals, and other technologies.

In other words, in China’s vision for a new world order, the rest of the world would be treated like family. When China’s making the rules, there’ll be no favoritism allowed in the global family of nations. Sounds eminently plausible and full of potential, does it not?

Sarcasm aside, it’s critical to understand that the liberal international order that has brought so much prosperity to the world—including China—is the exception to the rule in the long history of the world. It is Western norms of law and openness, coupled with a degree of magnanimity rarely practiced by the great powers throughout history, that has raised the standard of living in the world. Human rights, free expression, the exchange of ideas and charity are all Western ideals. Flawed in their execution at times, no doubt; but eminently preferable to the guiding principles that the CCP would levy upon the world.

The most glaring misconception among the experts is that China’s development “model” is one for other developing nations to emulate. But the reality is that China’s modern economy wasn’t created by the intellectual brilliance of the CCP—far from it. Left to the ideas of the communists, China would have starved. In fact, it did so for thirty years, leading to the deaths of tens of millions of people.

China’s development is primarily due to the heavy involvement of Western economies in China’s economy. But even so, China’s fascist economy is directed by political, not economic considerations, manifested by fraud, graft, waste and widespread pollution. In fact, China has all but destroyed its ability to feed itself and is among the most polluted nations on the planet. This is what drives China outward—its own policies have rendered much of the country a wasteland.

All of these are by-products of a corrupt political class that undermines economic efficiency, ecological hygiene and prohibits broad economic and social development. What’s more, China’s warped economy has been shown to be much less than what it seems, sustained by an embedded falsity of data and a debt level that, at some point, will contribute to its undoing.

The irony in the prospect of a Chinese-led new world order is that just as China is rising, so too, it is falling. Even now it struggles to sustain an economy that cannot stand up under its own weight. Is such a nation the ideal and foundation upon which to base a new world order?