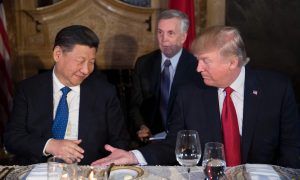 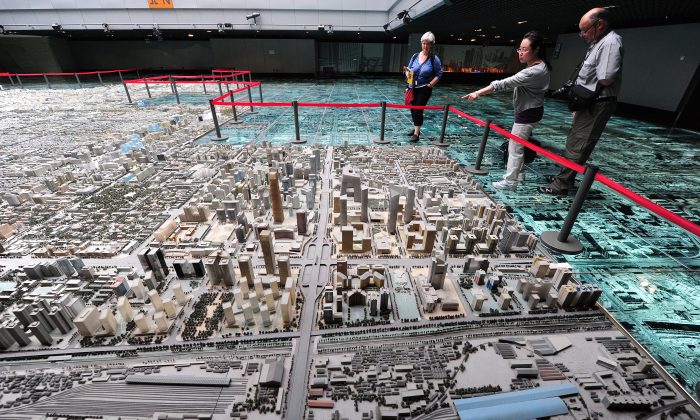 Since January, the signal released by the Chinese communist regime has been very clear: it will invest in urban rail transit construction to stimulate the economy, a repetition of the old trick used in 2009 whereby the government spent 4 trillion yuan ($594 billion) to revive the economy.

All these measures are not intended to serve as the savior of the world economy, but to save the Chinese economy, and to reach the “six stabilities”–the economic growth goals set by the Politburo of the Chinese Communist Party Central Committee in August 2018. They represent stabilities in the areas of employment, finance, foreign trade, foreign investment, domestic investment, and development targets.

Ever since “Made in China 2025” became the key target of the U.S.-China trade war, in order to cope with the outflow of manufacturing orders, the continued economic decline and the increasing unemployment pressure, China has to return to the old path of expanding credit and increasing government spending.

Why is Chinese Economy Still Hungry for Capital After Five Consecutive RRR cuts?

The one percent bank reserve requirement ratio (RRR) cut and the release of 1.5 trillion yuan ($223 billion) worth of new loans in early January this year was quite mind-boggling. On top of that, an official of the State-owned Assets Supervision and Administration Commission (SASAC) revealed on Jan. 16 that the new policy “required that the role of government bonds be strengthened as a benchmark financial asset, and can be used as quasi-currency.” These have triggered a public outcry–China’s central bank is practically issuing a credit card directly to Ministry of Finance.

Now the question is, after five consecutive RRR cuts, why is China’s financial situation still tight, and it is necessary to release a large amount of government bonds to serve as quasi-currency?

The answer is, China’s massive debts have become an unresolvable problem. The enormous debts have become a such big mess that even the Chinese government has a hard time sorting them out. As the amount of debts in 2018 is still an unknown, we have to use the 2017 data to analyze and discuss the situation.

Estimates by international financial institutions are much more serious. An estimate based on some verifiable data from China showed that, by the end of 2017, debt to GDP ratio is 364 percent. Bloomberg surveyed 21 economists in March last year, and according to median of their estimates, China’s total debt will reach 260 percent of gross domestic product by the end of 2018, basically unchanged from a year ago.

Corporate bonds and local government debts account for a big percentage of the total debts. Considering the borrowers’ ability to repay these debts, a serious debt crisis may occur at anytime. Central Bank’s RRR cuts are intended to avoid this crisis, and they have two purposes. One is for the repayment of the debts; the other is they hope the expanded credit funds, that is the increased release of currency, can help boost the real economy.

China’s development model, to stimulate economy through investments, has long suffered diminishing marginal utility. According to the International Monetary Fund (IMF), investment funds must be tripled for China to maintain the same economic growth rate as before. That is why the financial market is always hungry for additional funds, despite Central Bank’s constant quantitative easing policies.

There are several so-called “grey rhinoceroses” for the Chinese economy. Among them is huge debt from government spending on the construction of railroads, roads, and airports. Now that all completed projects of high-speed rails and subways are in deep debt, why would the National Development and Reform Commission (NDRC) intensively approve more than 1.2 trillion yuan of urban rail projects in the recent two months, and still regard infrastructure as the key to the “stable investment” for governments?

The losses of the high-speed rail and the subway are verifiable facts. Since the opening of China’s first high-speed rail, China Railway Corporation has always been in debt. In 2018, the company’s debts were as high as over 4 trillion yuan ($593 billion). Some may argue that the high-speed rail is not the focus of government investment this year, as its focus is on urban rail or subway instead.

However, subways are constantly losing money as well. According to a research report, “The Overall Development of China’s Urban Rail Transit Industry,” by the end of 2016 a total of 43 cities have been approved for the construction of subways, with a total planned mileage of about 8,600 kilometers (5,344 miles). Looking at the level of individual subway routes, except for Beijing Metro Line 4, Beijing Metro Airport Line, and Shanghai Metro Line 1, all other lines are operating at a loss.

For example, the slogan of this round of government investment is “make up the weak point to achieve stable investment. However, urban rail projects should not be considered a “weak point.” Subways in the first and second-tier cities are seriously oversupplied. For the 50 third-tier cities, at least there is no urgent need for subway construction.

The reason why local governments are vying to build subways is simply because it is a “money-burning” project. According to data publicized by Zhao Chenxi, a spokesperson of the NDRC, the average cost of subways is about 700 million yuan per kilometer.

The main source of construction funds is government financial funds and indirect financing. The operation mainly relies on financial subsidies, so whether it makes a profit or not is not a matter of concern (at least for Chinese officials). Once the application for subway construction is approved, local government will achieve at least three “stability” goals: stable investment, employment, and expectations. It takes several years to build a subway, as long as these officials can achieve those three stabilities during their tenure, and ensure local economic growth, they will be able to “stabilize” their official titles or even get promotion.

That is why Chinese local government are wearing new shoes but still taking the same old road. The government focuses on exploring underground transportations and keeps spending on infrastructure construction.

Stability Depends on Whether the U.S. is Willing to Let China off the Hook

China’s top 10 exports to the United States are all foreign-funded enterprises, eight of them are Taiwanese. Seventy percent of China’s top 100 exports to the U.S. are foreign-funded enterprises (40 percent are Taiwanese companies), while only 30 percent are pure Chinese companies. Presently, foreign investors are very worried about the impact of an increase in tariffs, as a result of the U.S.-China trade war.

Many of them are considering moving their companies out of China, which would eventually lead to global industrial restructuring.

On Jan. 18, both Bloomberg and Reuters quoted information sources on major developments in U.S.-China negotiations. Bloomberg revealed that China had offered to increase its imports from the U.S. by a combined value of $1 trillion in the next six years to balance the huge trade deficit between the United States and China. Reuters reported that the United States demands “regular reviews of China’s progress on pledged trade reforms as a condition for a trade deal, and could again resort to tariffs if it deems Beijing has violated the agreement.”

Whether China can purchase $1 trillion worth of U.S. goods in the future involves U.S. regulations on exports to China. With existing regulations, the United States cannot provide this amount of goods. The regular review proposal–still dependent on future negotiations at this stage–will help end the trade war and will be greatly helpful for China in achieving two of its “stability” goals, stabilizing foreign trade and stabilizing foreign investment.

The “Six Stabilities” are Meant to Stabilize Bubbles

In the past 100 years, there have been nearly one hundred economic crises of various scale. In times of peace, nine out of ten economic crises stemmed from real estate. The 1986-1991 real estate bubble in Japan was too painful to recall for the Japanese. When Japan’s bubble economy was at the peak of its prosperity, combined land prices of Tokyo alone was equivalent to the combined land price of the entire United States.

The bursting of the real estate bubble set housing prices into a protracted decline and the Japanese economy into “the lost two decades.” According to some researchers, excluding all other losses real estate and stock price drops alone caused a loss of wealth of 1,500 trillion yen, equivalent to the sum of Japan’s nationwide personal financial assets, which is the sum of Japan’s GDP over three years at the time.

Any country relying on credit expansion to develop its economy will eventually create a real estate bubble.

According to the 2018 Global Wealth Report published by Credit Suisse Research Institute (CSRI), by mid-2018, China’s family wealth ranked second in the world. The 2017 Hurun Wealth report claimed that one in every 940 people in China has a net worth of 10 million yuan (about $1.48 million).

Domestic research revealed that real estate accounts for more than 70 percent of China’s household assets. In recent years some property owners, fearing the loss of household wealth, launched protests against real estate developers when they offer price cuts, and it happened in many locations across China. This phenomenon is undoubtedly a Chinese characteristic. Real estate binds the government, banks, and property owners into a community of shared interests. Together, they go all-out to maintain this huge bubble for their own interests.

The injection of additional currency into the markets at the beginning of 2019 has made the long-suffering and helpless local governments feel relieved. Government officials and relevant industries may think that, another round of development opportunities is now on the horizon. These short-sighted people are unwilling to think deeply. It’s actually a new round of drinking poison to quench a raging thirst.

Premier Li Keqiang gave a speech at a forum on Jan. 15, saying “it is necessary to keep the economy growth rate within an appropriate range. We must avoid ‘big ups and downs’, and definitely cannot allow the economy to ‘fall off a cliff.’”

His words are by no means a declaration of further development, but a call for stable burst of the bubble. That is, the bubble should slowly deflate under the control of the government. A drastic burst must be avoided at all costs.