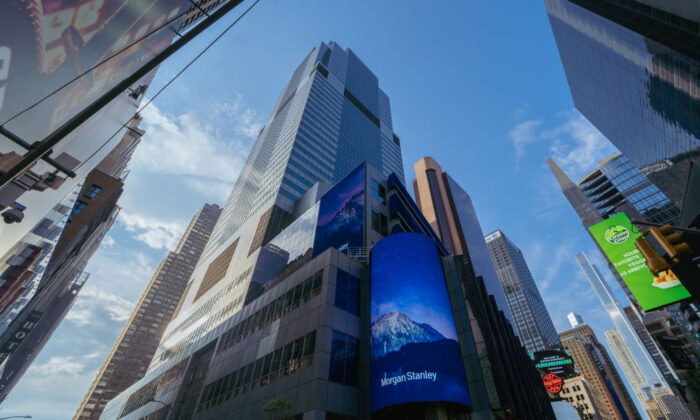 A view of the exterior of The Morgan Stanley Headquarters at 1585 Broadway in Times Square in New York City in July 2021. (Gabriel Pevide/Getty Images for Morgan Stanley)
China Business & Economy

Foreign investment banks are likely to see more regulatory risks when underwriting IPOs for Chinese firms, according to a financial analyst.

Foreign investment banks will also have to file annual reports by Jan. 31 that detail the offshore listings of Chinese firms that they serviced during the year.

Senior Chinese financial analyst Albert Song told The Epoch Times on Jan. 1 that the new regulation proposed by CSRC is another big move for the Chinese Communist Party (CCP) to scrutinize capital market activities and broaden its regulatory oversight overseas.

“The CCP hasn’t detailed the filing procedure yet, but it has revealed its intention to gain more control going forward,” Song said. “This is unprecedented.”

Investment banks are typically supervised by the regulator in the country where they operate. By requiring international banks that underwrite a Chinese firm’s offshore listing to also comply with the Chinese regulator, the CCP is setting a never-before-seen precedent with its new rules.

All Chinese companies seeking IPOs and additional share sales abroad will also have to register with the Chinese securities regulator under the newly proposed rule. Any listing that the CSRC describes as a potential national security threat will be banned from proceeding.

CSRC has given market participants until Jan. 23 to send their feedback on the draft rules. “It is important for foreign banks and governments to know that CCP’s regulatory framework is opaque and arbitrary,” Song said.

“All companies that do business with China will face heightened regulatory risks.”

The ill-fated New York initial public offering for Chinese ride-hailing giant Didi Global Inc. illustrates the CCP’s opaque and arbitrary framework, according to Song. “The actions taken by the [Chinese] regulator are likely far beyond the predictions of Didi’s management team and bankers,” Song said. “Otherwise, they wouldn’t decide to go public at all.”

Didi Global Inc (NYSE: DIDI), a Chinese ride-hailing giant, made its debut in the New York Stock Exchange on Jun. 30, 2021, at a valuation of $68.49 billion, reaching a record high since Alibaba’s IPO in 2014, according to a BBC report. However, a sweeping crackdown turned Didi’s roaring IPO into a debacle with shares tanking after Beijing shocked investors by announcing it was investigating the company.

“China’s regulatory framework is fundamentally different from the western countries,” Song said. “In China, the [CCP] officials have more power than its administrative officials.

“Crackdowns can easily happen just because a party official says so.”

Didi’s financial performance has since deteriorated significantly. Its net loss attributable to ordinary shareholders (pdf) widened to $4.7 billion in Q3 of 2021, after it recorded a $2.9 billion net loss in the first half of 2021.

“The actions taken by the [Chinese] regulator are likely far beyond the predictions of Didi’s management team and bankers,” Song said. “Otherwise, they wouldn’t decide to go public at all.”

Organization for Economic Co-operation and Development (OECD) is a global policy forum involving 38 member countries, including the United States. And according to OECD (pdf), “transparency” is one of the central pillars of effective regulation.

“China’s regulatory framework is fundamentally different from the western countries. Crackdowns can easily happen because a party official says so,” Song added. “In China, the [CCP] officials have more power than its administrative officials.”

And China appears to lack those principles when it comes to creating regulations, Song added.

Kate Jiang
Follow
Kate Jiang is a financial analyst and an Epoch Times contributor based in Hong Kong.