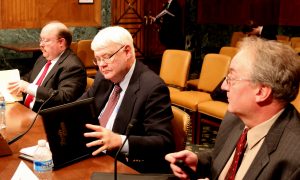 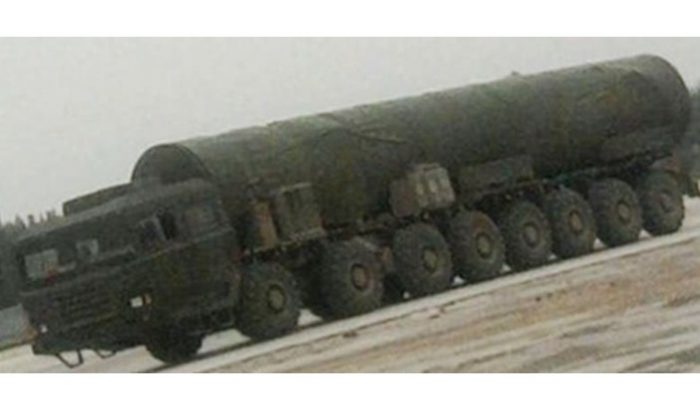 A new, potentially off-road missile launch truck made by the Tai'an Corporation that could be for the new "DF-31B" ICBM reportedly tested in September 2014. (Chinese Internet)
China

A recently-produced Chinese missile capable of targeting the United States may be getting an upgrade—improved accuracy, different payloads, and a new, off-road mobile launch platform that would make the threat harder to neutralize. According to experts, the changes represent a further hardening of China’s nuclear capabilities, and another potential threat from China for the United States to monitor.

According to reports, this new launcher may carry the DF-31B, a Chinese intercontinental ballistic missile (ICBM) reported to be in development. If deployed, it would join the DF-41, a long-range ICBM most recently tested by the Chinese military last December.

What sets the new TEL vehicle apart from its predecessors is its apparent all-terrain characteristic. According to Richard Fisher, a Senior Fellow at the International Assessment and Strategy Center, the Chinese military at present stores its missiles in bases hidden underground. The weapons, loaded onto their TELs, must then be driven along paved roads to suitable launching sites.

This new launcher may carry the DF-31B, a Chinese intercontinental ballistic missile (ICBM) reported to be in development.

In addition to being costly, this network of roads reduces the secrecy of the PLA’s nuclear base locations because it makes them “highly visible from outer space,” according to Fisher. A TEL that could transport and launch its payload independently of paved road would boost the survivability of China’s strategic assets during a nuclear exchange.

For a military that possesses nuclear weapons, a reliable delivery method is every bit as important as the bomb itself. During the Cold War, ballistic missiles were usually built to be launched from silos or submarines. In the 1980s, however, the Soviets pioneered missiles that could be launched from trains and trucks.

The United States had a similar program, called the Midgetman, which called for an ICBM small enough to be transported and launched from a vehicle called a Hard Mobile Launcher. Successfully developed in the 1980s, the project was eventually abandoned in 1992 following the collapse of the Soviet Union and political pressure on the U.S. military to scale back its nuclear deterrent.

American ballistic missiles are currently confined to stationary silos, making them vulnerable to first strikes should their locations be known to an adversary.

Mounted on the new launcher shown in the photo could be a new variant of the DF-31, the DF-31B, according to testimony by a high-ranking U.S. military officer. This new missile would carry a payload of several warheads, making it a so-called “multiple independently targetable reentry vehicle,” or MIRV.

The DF-31B will potentially join another road-mobile missile, the DF-41, in service with the Chinese military. The DF-41 was first tested in 2012, according to the Washington Free Beacon, and can deliver 10 warheads to anywhere in the continental U.S.

Last December, the Chinese regime confirmed that it had conducted launch tests with the DF-41 at the Wuzhai aerospace testing center in central China’s Shanxi Province.

Referring to the admiral’s statements, Richard Fisher said that “for the commander of US Strategic Forces to indirectly mention these two ICBMs bolsters this threat in the estimation of the U.S. government.”

While one missile can carry multiple nuclear warheads, the explosive power of each nuke must be reduced accordingly. Because targeting equipment possessed by communist states has tended to lag behind that of the West, their missiles typically carried larger, more destructive warheads to compensate.

According to Fisher, the DF-31 and DF-41, with their multiple payloads, are more accurate than earlier Chinese intercontinental ballistic missiles. Pointing to the smaller yield size of modern Chinese warheads, he says it stands to reason that the Chinese would move to smaller warheads if they were indeed getting more accurate.