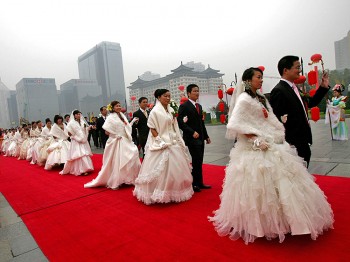 Marriage law in China previously stated that married couples share joint ownership of property. However, the new proviso stipulates that in the event of a divorce, a house by law belongs to the individual who made the down payment, or in the case where parents purchased the house, it belongs to them, whereas the other spouse is awarded nothing.

In the many cases where women will not have made the down payment on property, even though the women may have made a significant contribution in mortgage payments, in the event of divorce, the new stipulation states that the spouse should receive compensation for mortgage payments, based on the market value of the house.

Internet and media commentaries concede that the amended law unjustly favors men, who already dominate the institution of marriage, and deals a low blow to women, by not promoting equality between the sexes and not affording women protection by law.

Mainland media reported that Ms. Zhu from Nanjing was the first casualty of the new stipulation.

When the court opened session on Aug. 8, Zhu’s attorney proposed that she claim ownership of half of the house she and her husband had shared. One week later, after the new stipulation had just gone into effect, Zhu could no longer lay any claim to house, and evidence that her husband had even had two extramarital affairs carried no weight.

An attorney interviewed by The Epoch Times said many people are dissatisfied with the new stipulation. The people that make the laws are men, he said.

Mr. Zhang from Jiangsu Province told Epoch Times that the old marriage law which said that couples co-own all property after marriage “was very reasonable and shouldn’t have been changed.”

He also said in jest that the new law seeks only to protect Chinese Communist Party officials who often keep mistresses.

“Of course, it is not explicitly stated, but people see the innuendo behind it.”

Mr. Hong from Zhejiang Province said that the new law’s oversight is that it lacks compensation for women when their husbands have extramarital affairs.

“The bottom line is, under an unfair system, the law is just for decorative purposes only,” he said.

Radio Free Asia reported that Professor Xie Jiaye, president of the Sino-U.S. Science and Technology Cultural Exchange Association, said that couples who have doubts can sign prenuptial agreements; it does not have to be incorporated into the marriage law.

He said the new stipulation has a negative effect on the value and significance of marriage, and implies, “I’ve married you, but I can divorce easily; when I leave, you won’t get anything.”

The change elicited other points of view from some female bloggers. Comments such as “men are not reliable,” “women should be independent” and “women should buy their own houses” resonated with many of them.