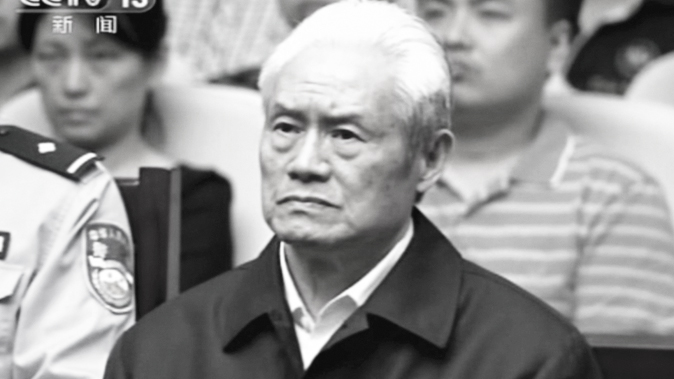 Zhou Yongkang, formerly the Chinese Communist Party Politburo Standing Committee member in charge of security, sits in a courtroom at the First Intermediate People's Court of Tianjin in Tianjin, China, on June 11, 2015. Zhou was sentenced to life in prison. (CCTV via AP)
Chinese Regime

Beijing recently adopted the anti-organized crime law that will take effect on May 1. This is a further step in fighting crime after a previous 3-year campaign, according to state mouthpiece Xinhua.

Chinese leader Xi Jinping’s anti-corruption movement was dubbed with the slogan, “Sweeping the dark, Eliminating the bad,” to go with its 3-year campaign. Chen Yixin was the director of this new task.

Xi’s anti-corruption campaign is typical of Chinese Communist Party (CCP) leaders’ efforts to eliminate political opponents and their subordinates in the administration, military, and cultural domains.

I believe the new law signals Xi’s decision to initiate another round of purging those in the central, powerful, political, and legal system.

The system (pdf) includes police, procuracy, courts, lawyers, correctional institutions, and People’s Armed Police (PAP); protects the Party from its enemies; and serves as a major organ to maintain stability—the totalitarian rule of the Party. It’s a unique system known as the “hilt” for the Party leader to grasp political power.

After the powerful leader of the system, Zhou Yongkang was expelled from the Party and arrested in 2014, and until Xi’s former subordinate Wang Xiaohong was appointed to head the Ministry of Public Security in late 2021, Xi seemed to further secure his grasp of the “hilt.”

Looking back at the 3-year campaign that started in 2018, we see that Xi was paving his way by cleansing his opponents that were hidden in society.

Among the 12 types of “dark and bad” forces targeted in 2018 were members of the so-called “protecting umbrella” who were affiliated with the local authorities and industries.

By the end of 2019, the entire nation engaged in a comprehensive purging of the public security and the political-legal system. According to the official report, the investigation of cases involving “umbrellas” had increased 231 percent over 2018.

In April 2021, the task director Chen Yixin concluded the successful 3-year campaign, and announced that the task had officially transitioned into “routine” practice. As of July 31, 2021, more than 170,000 police officers have been purged for violation of the law.

Among them are the notorious figures of the 610 Office—a Gestapo-like extralegal agency whose sole purpose is to persecute Falun Gong.

The anti-organized crime law emphasizes that ruling stability was its number one mission. The state media touted the law as a campaign against “soft violence.”

The law identified soft violence as “organized disturbing, pestering and assembling a crowd to cause an uproar for illegal profit or illegal impact.”

Soft violence is tantamount to what is called a pocket crime—a catch-all offense for any activities that may not meet the standard of criminality but are simply unacceptable to the Party.

Therefore, behavior involved in civil rights protection, such as putting up posters, spraying slogans, hanging banners, splashing paint, gathering for discussion, and so forth, may be regarded as soft violence.

The draft legislation stipulates that people involved in organized cyber crimes who are not acquainted with or have never met each other are considered to be members of criminal organizations.

In other words, the all too familiar charges like picking quarrels and provoking trouble, and administrative penalties will no longer be applicable to those who give a thumbs up to an internet post. Rather, they will be considered a member of “organized crime.”

Head of the Organized Gang

Those staggering figures show the fact that the scale of criminal involvement and corruption within the Party is extensive and deep.

Considering the CCP’s full control of state resources, and its powerful political-legal system, these criminal cases can only be attributed to the Party’s endorsement.

A Shanghai sex bribery scandal that made headlines in China in 2020 is a good example. At least 13 top ranking officials and state-owned company executives sheltered the criminal kingpin, Zhao Fuqiang, who offered prostitution services in exchange for business advantages, as revealed by the insiders.

After the exposure of the Party officials involved in the scandal, the regime simply severed its ties with those who were involved.

Prior to the national meeting of its rubber-stamp legislature in 2022, Xi continued his bloody internal power struggle through one campaign after another. The “routine” purging and implementation of the new law suggest that the CCP’s political-legal system is facing another storm.