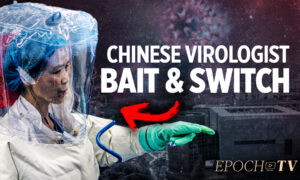 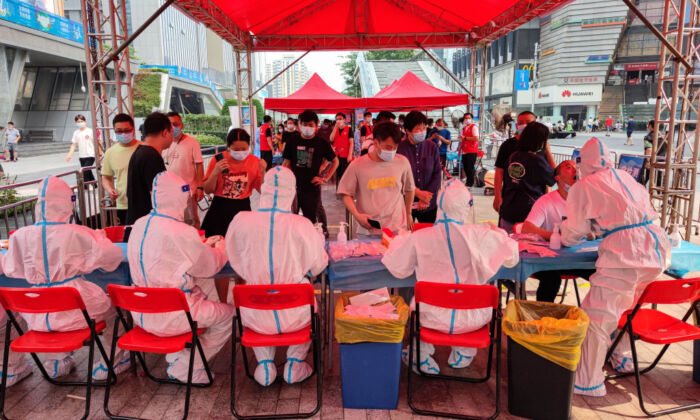 Cases of the COVID-19 “Delta” variant, which officials say has the shortest transmission time discovered so far, have recently appeared in Guangzhou, China. The variant could be transmitted by simply passing by someone with the virus, even without physical contact. This report puts Shenzhen, the city adjacent to Guangzhou, the world’s third-largest cargo port, under tremendous stress.

In the published surveillance footage, the third-generation Delta virus carrier, Huang, and the fourth-generation Delta virus carrier, Lu, ate separately in the same restaurant on the same day and entered the same bathroom. They passed by each other at the entrance corridor of the bathroom and spent only 14 seconds in the same environment. There was no physical contact between the two parties, and one of them was not wearing a mask.

According to the report, a viral transmission within 14 seconds in the same environment is the shortest contact time recorded thus far in this pandemic.

On June 22, Chang Juping, deputy director of the Shenzhen Municipal Health Commission, confirmed that the four cases were the Delta variant, according to gene sequencing results, and that these cases are identical to the virus genome sequence of the cases imported by Air China’s CA868 international flight.

As of June 20, 38 cases were confirmed among the CA868 passengers who arrived in Shenzhen from Johannesburg, South Africa, on June 10. All of them carry the Delta variant of the CCP virus, first found in India.

Due to this event, the Civil Aviation Administration of China issued a “circuit breaker” to Air China Flight CA868 (flights from Johannesburg, South Africa, to Shenzhen, China), immediately suspending its operations for four weeks. Since then, Shenzhen city has also launched a nucleic acid test for all its residents.

The rapid spread of the Delta variant has also put the Yantian International Container Terminal, the world’s third-largest cargo port after Shanghai and Singapore, under tremendous pressure. After many asymptomatic cases of CCP virus infection in Yantian District, Shenzhen, the Yantian Port was closed. The temporary closure of the Yantian Port is another interruption in global shipments following the Suez Canal blockage in March.

Maersk, the world’s largest container shipping company, said on June 17: “The several-week blockage of the Yantian Port heavily disrupted the global supply chain. And the blockage of global trade is ubiquitous due to the COVID-19 pandemic.”

Ships waiting for cargo to North America, Europe, and other places had to berth outside of Shenzhen and Hong Kong as it took as long as 16 days to dock at the Yantian Port.

As of June 21, Maersk stated that the stacking density of Guangzhou’s Nansha Shipyard, a shipyard less than 75 miles away from the Yantian Port, has reached 100 percent, adding that it would continue to delay the shipments for more than four days in the coming week.

Although the Yantian Port resumed normal operations on June 24, the industry estimated that the 750,000 accumulated 20-foot containers would take 82 days to clear out.