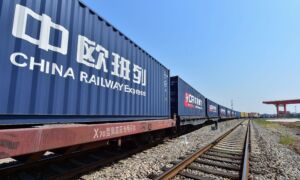 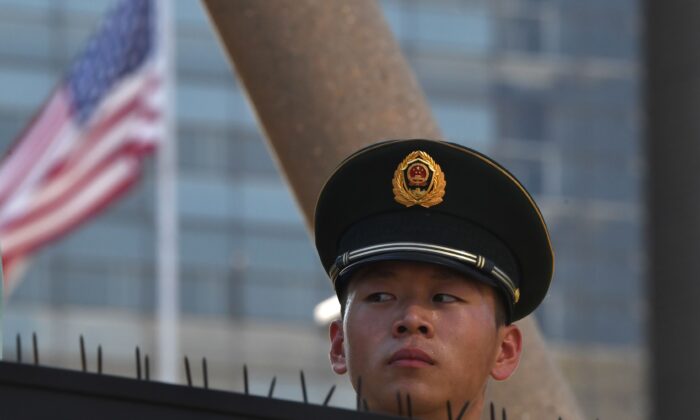 A policeman at the U.S. embassy in Beijing following a blast near the premises on July 26, 2018. (Greg Baker/AFP via Getty Images)
Thinking About China

The Chinese regime just enacted a broad extraterritorial law against anyone who aids in sanctions against China, including Chinese nationals and China’s “private” companies. China’s new counter-sanctions, announced June 11, include the ability to seek compensation from foreign companies doing business in China.

They are leveled at “discrimination” against Chinese nationals, and could apply against “organizations,” which is such broad wording as to include not only companies, but also governments. The law is broad enough to underpin sanctions against immigration or science restrictions on Chinese nationals who seek to emigrate or study science abroad.

Given the likely persistence of democratic sanctions against China, its new laws will make it increasingly difficult for foreign companies to do business in the country, which will increase pressures for wealthy democracies to decouple from China, and will force other countries to decide between doing business with China, or doing business with an alliance of democracies, including the United States, European Union, Japan, and perhaps India if it takes a stand with democratic allies rather than following a policy of non-alignment.

Most other countries, based on their trade interests with the larger economic bloc, will likely cleave to the democratic bloc if forced to make a choice. Even disregarding normative preferences for assisting democracies against China’s totalitarian government, the continuation of business with China will not be in company interests if China threatens them for following laws in the rest of the world, when the rest of the world reasonably sanctions China for its human rights abuse.

China’s GDP is just 20 percent of the combined GDP of the United States, Europe, and Japan, making it too economically weak to attempt counter-sanctions of the magnitude it has just enacted. The country is likely subject to dictatorial hubris and information failures, which would explain its outrageously aggressive, and self-defeating, behavior. Notwithstanding, such an irrational and unethical state is still highly dangerous to the international system and rules-based democratic norms.

The case of Secretary of State Antony Blinken, who enacted sanctions against China in March on the Hong Kong issue, illustrates the new laws. According to the South China Morning Post editorial board, “The targeting of China over the response to social unrest in Hong Kong gave [the counter-sanction law] more urgency.”

The law could extend to what the Chinese Communist Party (CCP) is calling “Belt and Road countries,” as if they were some colonial possession.

“Beijing has been discussing the latest step for some time, even before the US increasingly targeted China with sanctions,” according to the Post. “There was a need to come up with an effective response to sanctions on development partners in the Belt and Road Initiative.”

China’s new law provides the basis to counter-sanction Blinken and any companies that hire him into leadership positions in the future. For example, if Boeing or Apple is looking for a new CEO or C-level adviser, they might hesitate to employ Blinken after he leaves office because this could be grounds for China to then sanction these companies, which do billions of dollars of business in China every year. Knowing this, Blinken might soften his approach to China while in office in order to avoid personal sanctions that affect his future job prospects.

Blinken has, for example, cooperated in the past with Asia Society, a New York-based “nonprofit” that for years paid former Australian Prime Minister Kevin Rudd approximately $1 million per year. Asia Society has a Hong Kong chapter, which per the new law would be subject to secondary sanctions were Rudd subject to primary counter-sanctions for taking a tough stand on China when he was prime minister.

Given that Blinken likely knows that Asia Society has deep pockets for former politicians, and that a $1 million job wouldn’t work out if he took a tough stand against China while in office, he might prefer softer State Department policies.

On Jan. 21, the day after Joe Biden’s inauguration as president, China sanctioned 28 U.S. officials, including former Secretary of State Mike Pompeo, for “seriously violating” China’s sovereignty. Pompeo had just declared that abuse of the Uyghurs by China amounted to genocide. Don’t expect Asia Society to hire Pompeo for $1 million a year anytime soon.

Blinken agreed with Pompeo’s assessment during his confirmation hearings, again making him a likely target for China’s counter-sanctions.

While the threat of counter-sanctions may lead to subtle changes in U.S. law and policy, they are unlikely to radically change its direction given China’s recognized genocide and increasing military tensions. Sanctions and counter-sanctions will continue in the U.S.–China relationship over the next years as Beijing perceives a weak Biden presidency that can be pushed around, and the Biden administration pushes back forcefully in order to prove itself as a tough-on-China contender for the 2024 elections.

Commentators expect Beijing’s new law to pressure some U.S. corporations, which seek to avoid increasing risk, out of China. Others believe that the law will encourage U.S. corporations to lobby their own officials to moderate U.S. policies regarding Beijing. This is already happening, according to my sources and reports.

The Post predicts as much with respect to the new law.

“Once aware of a serious legal risk, [foreign companies] may feel enough pressure to be prompted by self-interest to lobby their own governments on China’s behalf,” according to its editorial board.

That would be China using its economic power to affect the laws and policies of democracies globally. The CCP is pushing against attempts to hold China accountable for its genocide, abrogation of the Hong Kong treaty with Britain, and abundant other human rights abuse and territorial aggressions.

A new cold war is upon us, creating a chill against United States, European, Japanese, and allied business in China. The erosion of this business will over time further increase political tension, in a downward spiral, that increases the likelihood of broad economic decoupling and military conflict with China.