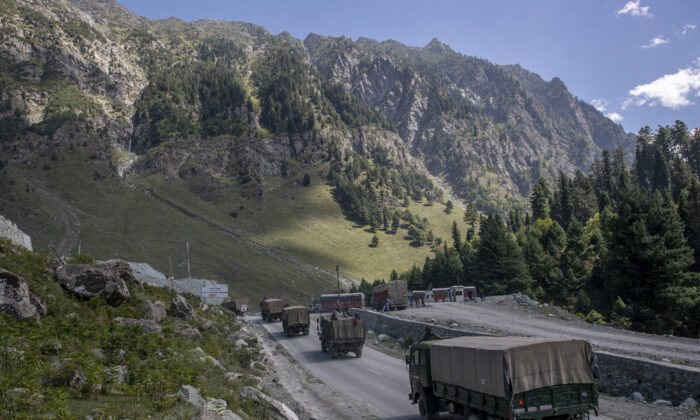 On Oct. 23, China’s top decision-making body voted to adopt a new law on the protection and exploitation of the country’s land border areas.

The law will go into effect on Jan. 1, 2022. Being the first of its kind, the timing of China’s enactment of such a legislation is significant, and it is aimed at Bhutan and especially India. China shares land borders with 14 countries, but has unresolved border conflicts with Bhutan and India. The China-India clash in Galwan Valley in June 2020 fractured the border management mechanism—the tensions along the Line of Actual Control (LAC) has only taken a rough turn, despite the levels of engagement at both diplomatic and military levels.

In this context, China’s legislation of the border law can be understood in the context of two key aspects.

The first aspect concerns the constantly changing dynamics at the India-China border, which is increasingly becoming volatile. The Eastern Ladakh crisis that evolved into an 18-month-long border standoff between China and India has resulted into a stalemate. China’s quest toward changing the status quo along the LAC has been met with India calling for a reversion to the status quo ante.

As noted, a de-escalation has not been achieved, in spite of the two sides agreeing to disengage in the north and south banks of the Pangong Lake in February, and in the Gogra area in August. Military talks are faced with a deadlock. The 13 rounds of talks have failed to make any significant improvements in China-India relations. Notably, the talks held on Oct. 11 highlighted the unfavorable and uncompromising reality of the border dispute. Contrary positions and lack of consensus only made the talks accusatory, wherein the Indian Army’s “constructive suggestions” was perceived by the Chinese People’s Liberation Army as “unreasonable and unrealistic“—thus, bringing the issue to square one. More strikingly, the disengagement process has also reached a stalemate, given Beijing’s reluctance to complete the stalled troop disengagement at Patrolling Point-15 in the Hot Springs-Gogra-Kongka La area—the pending issue that will be the key agenda for the forthcoming 14th round of military talks. Additionally, India also wants the restoration of patrolling rights in Charding Nullah Junction and Depsang Bulge, to which the PLA has displayed a belligerent attitude.

Instead of de-escalation, escalation is looming along the LAC as demonstrated by the rising security dilemma along the area, as both sides are engaged in heavy military build-up with sizable troops (estimated at 50,000 troops), with weaponry and support equipment deployed alongside the LAC, which raises the operational costs. For example, to combat any form of challenge posed by China, India has strengthened its firepower capabilities by deploying artillery guns such as the first K9 Vajra self-propelled howitzer in the Ladakh sector, in addition to main battle tanks, Akash air defense systems, quick-reaction surface-to-air missile systems, Igla-S air defense systems, Pinaka multi-barrel rocket launchers, and infantry-combat and high-mobility vehicles. On Oct. 27, in a show of force, India successfully test-fired Agni-V, a surface-to-surface intercontinental ballistic missile (ICBM) that forms the key component of India’s nuclear deterrence.

The second aspect is the Memorandum of Understanding (MoU) signed between China and Bhutan on a “Three Step Roadmap” for expediting China-Bhutan boundary negotiations. Against the tensions with India, the MoU with Bhutan paves the possibility for Beijing and Thimphu to reach some consensus on the demarcation of the border, and this may pave the path for their diplomatic ties. Against India’s wishes, China’s intentions will be to settle the boundary issue with Bhutan. Any form of compromise between Beijing and Thimphu will be detrimental for New Delhi. Thus, this brings into perspective China’s timing of extending an olive branch to Bhutan.

These two aspects help to make sense of China’s new border law that stipulates four key elements. First, China’s sovereignty and territorial integrity are “sacred and inviolable.” Second, Beijing will take measures to safeguard territorial integrity and land boundaries, and guard against and combat any act that undermines territorial sovereignty and land boundaries. Third, Beijing will take measures to strengthen border defense, support economic and social development as well as opening up in border areas. And finally, China will handle land border related-affairs with neighboring countries through negotiations to properly resolve disputes and longstanding border issues. Wherein, the first three sets of rules only apply to India and the fourth one applies to Bhutan. India’s “resolution” process has not only become difficult, but has also become dangerous. In this regard, China’s new border law can be argued as an offshoot of its three warfares strategy (psychological, media, and legal) that aims to break the opponent’s (India) will to fight without actual fighting. The border law acts as a non-kinetic measure to check India’s behavior along the border.

Thereby, the increasing lack of consensus over the 2,167-mile long disputed border that separates the jurisdiction of China and India’s respective armies has increasingly narrowed the room for any form of compromise—instead, compromise comes with costs. China’s new border law amid the ongoing border crisis only shows that concessions and negotiations are not an option on either side—making the “way forward” synonymous to “predicament.”