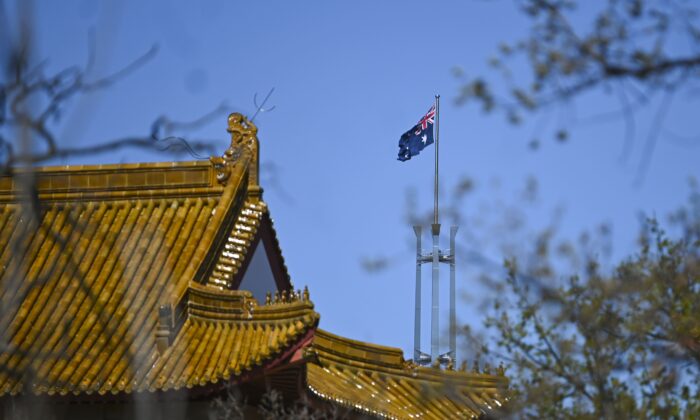 The flag pole of the Australian Parliament is seen behind the roof of the Chinese Embassy in Canberra, on Sept. 17, 2021. (AAP Image/Lukas Coch)
Australia

Beijing’s new ambassador to Australia, Xiao Qian, has struck a conciliatory tone in his first official statement upon arrival to the country.

The former Chinese envoy to Indonesia landed on Jan. 26—Australia Day—saying he was on a “noble mission.”

Xiao said in a statement on the official embassy website that he would work to increase engagement, “eliminate misunderstanding and suspicion,” and “jointly push” Australia-China relations back on track.

Cheng was the face of Beijing’s “wolf-warrior” diplomacy, which saw the official adopt more confrontational rhetoric against Australia while the Chinese Communist Party (CCP) instigated an ongoing economic coercion campaign in response to Foreign Minister Marise Payne’s calls for an investigation into the origins of COVID-19.

While Xiao has hinted at a softer approach to diplomacy, the new ambassador has not shied from exercising stern rhetoric in his previous post.

In September 2021, he wrote in the Jakarta Post that Washington D.C.’s renewed push for an investigation into COVID-19 was a “political farce.”

“The so-called origin tracing investigation of the U.S. government by its intelligence community is clearly politicising the issue of origin tracing,” he wrote in an op-ed. “Such a practice disturbs and sabotages international cooperation on origin tracing and on the global fight against the pandemic.”

Chin Jin, chair of the Federation for a Democratic China, warned in 2007 that regardless of who the ambassador was, under the CCP regime, their personal views would be sidelined for the interests of the communist regime.

“The incoming ambassador will continue the policy of consistent persuasion and seduction to undermine the U.S.-Australia alliance in particular and to consolidate Australia-China relations,” he wrote in an op-ed.

“China’s huge purchasing capacity for Australia’s raw materials and its seemingly enormous domestic markets will be used as effective tools to lure Australia closer to China in dealings with future international or regional relationships and conflicts of interest,” he said.

“In the process, China’s total lack of democracy and its appalling record on human rights are completely overlooked. Trade and money are thought to be more important.”