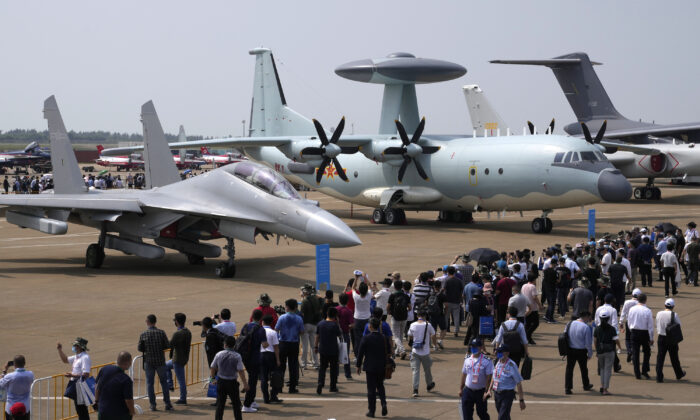 China’s New Airliner: A No-Show at the Airshow

The Zhuhai Airshow is China’s biannual event intended to showcase its aerospace industry. One important aerospace product, however, was noteworthy for its absence: the C919.

The event was held in late September, after being postponed by COVID-19 last year. No foreign visitors were permitted, but it was heavily covered in the international press.

Beijing particularly likes to use the airshow to highlight China’s growing self-reliance in aviation and aerospace. This year’s event included new electronic warfare aircraft, new drones, and powerful, new heavy-duty rockets intended to take a manned mission to the moon.

The C919 is China’s latest entry into the passenger jet business. Its nonappearance is significant since Beijing has so much riding on this plane.

The C919 is China’s torchbearer for breaking into the “big boys club” of commercial aircraft production. It is a 160-seat narrow-body jet, roughly in the same category as the Boeing 737 and the Airbus A320, two workhorses of the skies. It is being developed and built by the Commercial Aircraft Corporation of China (COMAC), a state-owned company created in 2008 to take charge of national passenger jet development.

That hasn’t happened. In fact, the C919 did not fly until 2017, and it has yet to enter full-rate production.

China’s commercial aerospace industry has historically overpromised and underdelivered. Its first attempt to develop a passenger jet, initiated by Mao Zedong in the 1970s, was the Y-10. This aircraft was basically a clone of the Boeing 707, a few of which China acquired in the early 1970s. The Y-10 flew a couple of times in the early 1980s and then was quietly shelved amid rumors that it was overweight and poorly balanced, and that if improperly loaded it would fall back on its tail.

China’s next effort was the ARJ21, a 90-seat regional jet designed for short-haul flights. Initiated in the early 2000s, it faced numerous delays and did not enter service until 2016; even then, only about 60 ARJ21s have been built. Noted aviation industry expert Richard Aboulafia called the aircraft “stunningly obsolete.”

The ARJ21 is too small for most Chinese air routes, while the country’s growing high-speed rail network is cutting into short-haul air traffic. Not surprisingly, therefore, the larger Chinese airlines, such as Air China and China Southern, have resisted buying the plane, and there are only firm orders for perhaps 225 ARJ21s.

The C919 isn’t much of a step up. According to Aboulafia, it features no new technology, nor is it more fuel efficient. There is, he said, “no technological selling point for this jet.”

The C919 is believed to have already cost China over $20 billion, and it has missed its milestones for first flight and first deliveries by three years. In addition, neither it nor the ARJ21 has yet been awarded airworthiness certification by the U.S. Federal Aviation Administration (FAA), without which it is almost impossible to sell the airliners outside of China.

So far, in fact, nearly all the orders for the C919 and ARJ21 have come from Chinese airlines, making it highly likely that Beijing strong-armed these companies into buying the planes. The first airline to receive the ARJ21, for example, was Chengdu Airlines, which is partly owned by COMAC.

Moreover, perhaps only a third of the orders for these aircraft are “firm.” The rest are either “options”—that is, nonbinding purchase agreements—or unconfirmed orders.

All this may hardly matter to Beijing, however. Economic nationalism and pride are mainly driving the C919 and ARJ21. The decision to enter into the large commercial aircraft market was made at the very top, by the State Council of China and by the Central Committee of the Chinese Communist Party (CCP).

COMAC is the very embodiment of “aeronautical patriotism,” and it views the production of large commercial aircraft as its contribution to Xi Jinping’s “China dream.”

In addition, COMAC and the C919 are part of China’s gigantic and inefficient state-owned enterprises (SOE) system. This “Big SOE” approach is increasingly favored by the CCP, and consequently billions are being poured into an airliner program with few prospects for global success.

Therefore, the C919 is basically a huge “vanity project” for Xi and the CCP. Great nations must have their own airliners. Furthermore, as Aboulafia has put it, “incompetent autocrats love” huge national passenger airliner projects, and “only autocratic regimes have the ability to allocate resources to national jetliners without anyone questioning why.”

Some have even called the C919 a “practice airplane,” intended to build up China’s skills in designing and manufacturing commercial aircraft. If so, then it, along with the ARJ21, is a rather expensive way to climb up the learning curve. When does China actually build something marketable?

In all likelihood, China will eventually sell a lot of C919s. Even if only Chinese airlines buy it, the domestic aviation market is huge (Boeing estimates that China could spend up to US$3 trillion on nearly 8,100 new planes by 2038). And Beijing is prepared to throw a lot of money at commercial aircraft development, despite COMAC’s inefficiencies and lack of experience in designing and engineering large passenger planes.

In fact, Beijing is putting a lot of emphasis on COMAC and the C919 because it lacks experience and expertise. Aboulafia has termed the C919 China’s “divorce jet.” Currently, the C919 relies on Western companies to supply such critical items as flight controls, landing gear, thrust reversers, and especially jet engines. These systems, however, are increasingly subject to export restrictions, which has slowed the C919 program.

Consequently, Beijing is using the C919 to promote homegrown solutions like CJ1000 turbofan engine and nacelles. This strategy may eventually work—and money appears to be no object—but it will make the aircraft even harder to sell overseas.

If Beijing succeeds in forcing its domestic airlines to buy the C919 (and subsequent Chinese-made passenger jets), the Chinese passenger jet sector could ultimately be a success in terms of numbers, if not in commercial viability. For now, however, the industry is a no-show.