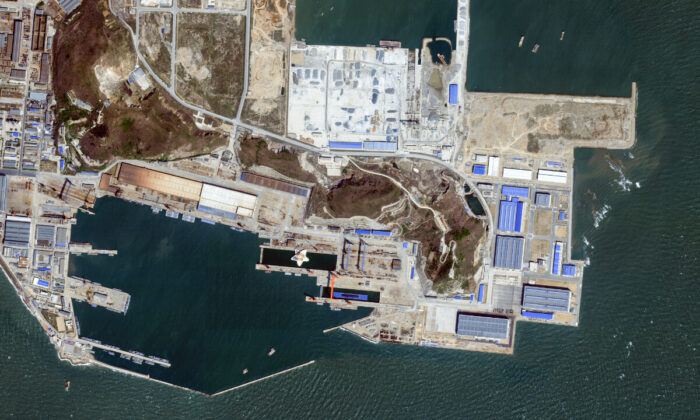 Beijing readies to drive the US from Asia, including with hypersonic missiles

The new military capabilities offer the People’s Liberation Army (PLA) both a sword against its neighbors and a shield against U.S. strategic forces.

The combined carrier and missile defense technologies put peaceful countries in the region under increased military threat, made all the more real by Vladimir Putin’s aggression in Ukraine and his “no limits” friendship with Xi Jinping.

Over the past few years and in tandem with Russia’s parallel aggression in Europe, Beijing has accelerated its military pressure against the United States, India, Australia, Taiwan, Japan, Vietnam, and the Philippines.

China’s other closest allies—Iran and North Korea—act in a similarly aggressive manner that pulls the United States and its allies in multiple directions at once.

Others like Malaysia, Brunei, and Laos try to stay silent and out of the fray, but in their silence and sometimes more, is complicity.

Beijing’s power in Asia is based on its growing military and economic power, matched with an aggressive pursuit of improved military technology. Yet some mainstream media, including Foreign Policy, The Associated Press, and NPR, downplay the threat or give credence to Beijing’s story that its latest military technological advancements are indigenously produced rather than stolen from the United States and Europe.

China steals up to $600 billion annually in U.S. intellectual property alone—and naval technology is no exception. China’s IP theft allows its navy to gain on the United States so swiftly.

Bloomberg News noted that China’s new carrier technology represents a “watershed moment” in the modernization of the PLA and burnishes Xi’s military credentials ahead of a Chinese Communist Party (CCP) leadership conference where he will seek an unprecedented third term as the country’s dictator-in-chief.

The propaganda video about the launch is dedicated to the CCP’s upcoming congress. The video stated, “Offense is our mission,” according to Bloomberg.

The PLA Navy (PLAN) launched the carrier on June 17. While a diesel engine will likely power the ship rather than more advanced nuclear propulsion, it uses the latest electromagnetic aircraft launch system (EMALS), according to Capt. James Fanell (U.S. Navy, Ret.), former director of Intelligence for the U.S. Pacific Fleet.

EMALS was initially developed by the U.S. Navy for its aircraft carriers and was first successfully tested in 2015 on the USS Gerald R. Ford.

While an analyst quoted uncritically by The Associated Press claimed that China’s new carrier technology is entirely China-developed, this is an obvious falsehood, according to Fanell. Consider how long it took the United States to develop the technology and that China jumped a prior technology, steam catapults, entirely.

The PLAN is rapidly catching up with U.S. military technologies only because it can use cyber, industrial, academic, and other forms of espionage. As a result, the PLAN is keeping pace with the United States technologically and is already ahead in some ways, including its anti-ship missiles and the greater number of its navy ships.

Fanell wrote in an email, “Given the PRC’s [People’s Republic of China] past espionage activities surrounding its first aircraft carrier, there is no question that the PRC has once again stolen EMALS technology from the US Navy. Anyone who suggests otherwise is only providing cover for the PRC’s espionage programs. It would be wise for the U.S. Department of Justice to investigate leaks from [within] the USG [U.S. Government] surrounding this very sensitive program.”

Rick Fisher, a senior fellow at the International Assessment and Strategy Center in the Washington area, wrote in an email, “Academic exchanges with the West provided the basis for China’s electromagnetic launch (EML) development, which is why the democracies must revive the Coordinating Committee for Multilateral Export Controls (COCOM) to block such access by China.”

The larger size of China’s new carrier, known as the Type 003 or Fujian, will allow it to launch not only fighter jets, but also delivery transport and airborne early warning and control airframes.

The carrier will likely employ two “starboard lifts to move planes to the upper deck,” according to experts cited by the South China Morning Post.

The Type 003 is China’s third carrier, but with the fourth, according to the Post experts, China will likely move to nuclear propulsion systems.

“China aims to have a true blue-water navy by 2035, with a fleet of 6 aircraft carriers,” according to the Post.

The test used a high-speed interceptor to hit a target missile in space, which would have created a large field of debris that threatened other objects in space, including satellites and manned space missions. The PLA has conducted ABM tests since at least 2010, including in cooperation with Russia.

Beijing claims to be developing artificial intelligence-enabled anti-missile defenses against hypersonic warheads, according to Indian media. If true, such defenses would give its naval ships a shield to blunt next-generation U.S. and allied hypersonic deterrence against its ongoing military aggression against Taiwan, Japan, India, and in the South China Sea.

The PLAN already operates submarines that use nuclear propulsion, including both attack and ballistic missile variants. Adapting those propulsion systems for its aircraft carriers should not be too difficult technologically.

China’s failure to do so for the Type 003 carrier, one of the few areas in which the United States still outcompetes China, could be due to any combination of causes: naval engineers may have wanted to decrease the number of technological challenges for the Type 003; Xi may have rushed the carrier to burnish his credentials ahead of the CCP congress, where he seeks an unprecedented third term; or PLA planners might have sped development in an attempt to project immediate military power against Taiwan, India, and in the South China Sea.

While the PLA has traditionally been a land army, its rapidly expanding “blue water” capabilities are meant to project power globally. This is consistent with the CCP’s ambitions of global hegemony, detailed in Rosh Doshi’s book, “The Long Game: China’s Grand Strategy to Displace American Order” (Oxford University Press, 2021).

“A third and perhaps soon fourth carrier before the end of this decade will serve to overwhelm U.S. naval forces forward deployed in Asia, while improved Chinese missile defenses will blunt the effects of soon to be deployed U.S. theater missile systems,” wrote Fisher.

“China’s third carrier, within two years, will join the first two in intimidation exercises around Taiwan that prepare for a major attack expected this decade,” he predicted.

The new PLAN carrier will join other elements of the PLA in threatening neighbors, including India, against which the PLA is engaged in ongoing territorial aggression.

“India will have to closely watch China’s new aircraft carrier and missile defense systems because these mark a qualitative boost to Chinese naval reach and strike power,” Subir Bhaumik, an India-based military analyst, wrote in an email.

“India has to take [seriously] its maritime diplomacy of developing naval alliances with other Asian nations equally worried over China’s military boost and assertiveness.”

Fanell called the Type 003 “another important milestone in the modernization of the PLA Navy’s ‘blue water’ capabilities.”

He noted that skipping from the old ski-ramp flight deck directly to EMALS, without the intermediate step of steam catapults, “underscores the confidence PRC Central Military Commission (CMC) and PLA Navy planners have in the pursuit of Xi’s stated goal of having a ‘world class’ military by 2035.”

The PLAN thus demonstrates its “skip echelon” strategy, according to Fanell, to not only catch up to the United States Navy technologically and by skipping intermediate steps, but to rapidly exceed it in tonnage and number of navy ships.

“Just think about it, in the past 10 years the PRC has commissioned three aircraft carriers to just one for the U.S. Navy,” Fanell wrote.

“While the first two PLA Navy aircraft carriers are smaller and less capable than their U.S. Navy counterparts, the fact is there is now 160,000 tons of PLA Navy steel at sea compared to just 100,000 for the U.S. Navy.”

Fanell argued that China’s pursuit of carriers, at a time when the United States is dithering over its own carrier force, shows confidence on the part of Beijing’s military planners.

“While there is a great debate going on within the U.S. Department of Defense and on Capitol Hill regarding the future of aircraft carriers in the face of the PLA’s anti-carrier ballistic missile (ACBM) threat (like the DF-21D and DF-26), the PRC has made it abundantly clear they are not deterred from pursuing a much larger carrier force,” wrote Fanell.

“These PRC military planners are confident their aircraft carriers will fare much better in a war-at-sea against the U.S. Navy, which is relatively underprepared for blue-water naval warfare.”

He pointed out that the PLAN is reaching toward naval superiority with their mix of technologies, including ACBMs.

“U.S. Navy carriers are threatened by PLA Rocket Force’s ACBMs, while PLAN carriers will operate with relative impunity, allowing them to project naval power farther and farther from the Chinese mainland,” Fanell wrote.

“This capability will be useful in a Taiwan invasion scenario where PLAN carriers will operate and launch strikes east of Taiwan, thus complicating U.S. and Taiwan defense strategies.”

Resupply of Taiwan with military materiel, so obviously critical to the Ukraine war effort, would be difficult if China controls not only the Taiwan Strait, but the seas east of Taiwan as well.

The bottom line is that the CCP is using Western technology and money—gained through trade, espionage, and academic interaction with the United States and Europe—to rapidly expand its navy to the point of overtaking and defeating the United States in Asia and ultimately the world. American and European governments must wake up and take action before it is too late.