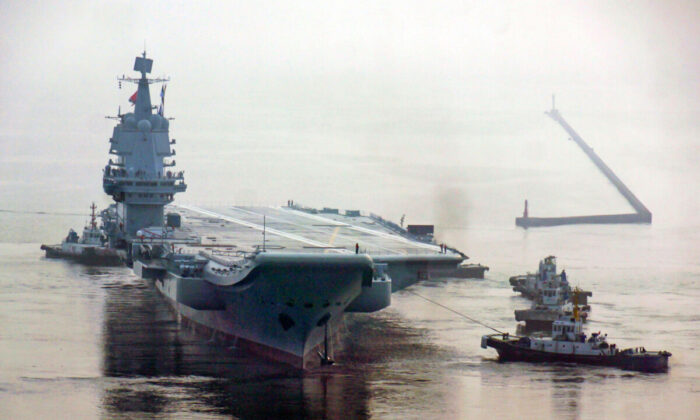 The Chinese regime just launched its third aircraft carrier, named the “Fujian” after the southern Chinese province directly opposite Taiwan.

The vessel is China’s first wholly modern aircraft carrier. It was preceded by the “Liaoning,” a retrofitted Soviet ship, and the “Shandong,” a domestically-built vessel that was designed and augmented off the plans for the Liaoning.

Though the vessel will not be fully operational until 2024, it is far and away superior in size and technology to both which came before it.

While the vessel presently does not pose an imminent threat to the United States, it does allow Beijing to enhance its power projection capabilities in the region, according to former Naval Officer Michael Cisek.

“The aircraft carrier is essential because it’s at the center of the carrier strike group, usually surrounded by destroyers and cruisers, so they can project power, way out there on the other side of the world,” Cisek, a senior associate at AeroDynamic Advisory, told EpochTV’s “China Insider” program in an interview before the official launch of the carrier.

Cisek noted that Beijing has already set up its own forward operating base in the East African country of Djibouti, and the People’s Liberation Army (PLA) is reportedly building a secret naval base in Cambodia.

Given China’s existing naval bases, Cisek pointed out that the aircraft carrier of this type is integral for the PLA in its bid to build and expand its blue-water navy, meaning a maritime force capable of operating in open waters across vast distances.

“The new carrier is going to enable them to extend their range hundreds and hundreds of miles further than they already do,” Cisek said, adding that “they’re going to be able to project their power even further off the Chinese coast.”

“But it’s still in the early stages right now. And one carrier is not going to make a difference,” when compared with the U.S. fleet, given America’s technological superiority, he added.

Cisek noted that the new carrier is equipped with electromagnetic launch catapults that will allow it to field more varieties of aircraft with heavier payloads and more fuel, and boasts a full-length flight deck.

“For a carrier of this size, there’s only a few nations that have operated catapult-launched aircraft, the United States and France. So this is a big deal, just in terms of the history of aircraft carriers,” he said.

“If they can start bringing fifth-generation fighters into the fold to combat the US F-35, which are currently airborne, they’ll be a formidable opponent, he added.

“So what this carrier does is it’s going to try to level the playing field for China, it’s going to enable them to compete with the U.S. in terms of aircraft and aerospace dominance.”

Andrew Thornebrooked contributed to this article.