China’s Net Exports Contribution to Growth Plunged by -7.3% in Late 2019 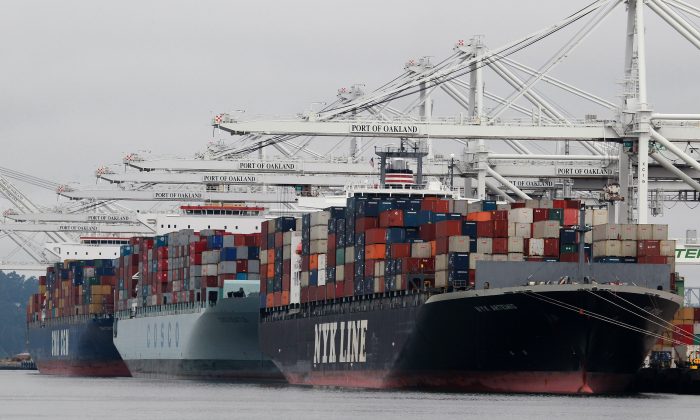 Container ships are positioned under cranes at the Port of Oakland in Oakland, Calif., on Aug. 16, 2010. (Justin Sullivan/Getty Images)
By Chriss Street

China signed a U.S. Phase 1 trade truce just as data was about to demonstrate that its net exports contribution to domestic economic growth plunged by -7.3 percent in the fourth quarter of 2019.

Enodo Economics reported that in the 10 years from the bottom of the Financial Crisis to the third quarter of 2019, China’s quarterly contribution to growth from “net exports” averaged -.25 percent per quarter. But that slow decline plunged in the fourth quarter of 2019 as U.S. tariffs hammered China’s “factory to the world” competitiveness.

Enodo Economics estimates that in the same decade of slightly negative momentum from exports, China’s quarterly real (after inflation) growth from domestic consumption and investment averaged a booming +8.6 percent compounded quarterly gain. But as export momentum plunged in the fourth quarter, a stunning +13 percent quarterly gain in domestic consumption and investment prevented China from falling into recession.

Despite the reported spike up in China’s internal economy in the fourth quarter of 2019, the quarterly annualized rate of growth from retail sales was a meager +1.7 percent; car sales slid -4.3 percent, and total fixed asset investment collapsed by -87.6 percent.

The Chinese regime went all-in to support the domestic economy in 2019 with a combination of tax cuts, regulatory rollbacks, targeted monetary easing and an 8.8 percent spike in government expenditures for domestic goods and services.

A key advantage for communist autocratic leaders in a command economy is the ability to mandate state-owned enterprises to increase volume, regardless of the lack of demand. As a result, China printed big quarterly gains in the fourth versus the third quarter with steel production reversing from -.3 to a +4.9 percent; industrial production ticking up from +2.2 to +5.3 percent; and power generation jumping from +4.3 to +10.2 percent.

According to Enodo Economics: “The signing of the phase one trade deal with the U.S. suggests the Chinese leadership’s worries about growth and the structural transformation of the economy are bigger than they appear on the surface.”

The Phase 1 trade deal does give China a period of stability in trade and improved relations with Washington in the short term. But it is a deal that does not include the full removal of American tariffs, which are “staying in place as an enforcement tool.”

Although some commentators have suggested that Beijing signing a trade truce is about Chinese leader Xi Jinping “bowing to imperialist pressure,” Enodo Economics suggests that Xi made a goodwill gesture so that he can get on with his “economic and geopolitical ambitions and continue to pursue the self-sufficiency they seek, notably in technology.”

President Trump in his speech to the World Economic Forum at Davos, Switzerland on Jan. 26, 2018 spoke about America’s support for signing bilateral agreements to achieve free and open trade. But he pointedly focused on China by stating: “The United States will no longer turn a blind eye to unfair economic practices including massive intellectual property theft, industrial subsidies, and pervasive state-led economic planning.”

The Phase 1 truce does not signal an end to trade and financial worldview clash between a communist China and a democratic United States. Enodo Economics forecasts that taking these factors into consideration, there is only 10 percent probability that China and the United States will sign a Phase 2 trade deal by the 2022 elections.