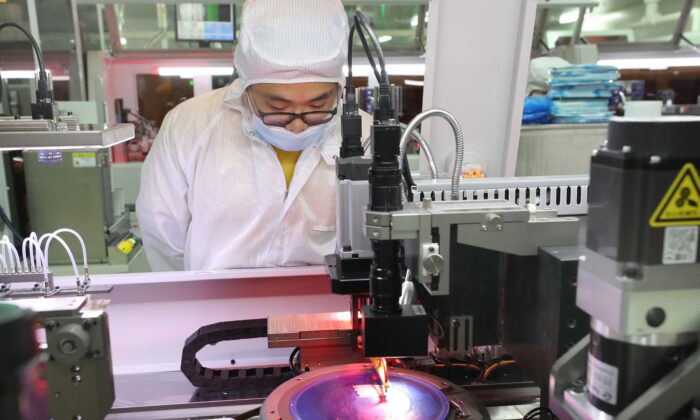 An employee makes a chip at a factory of Jiejie Semiconductor Company in Nantong, in eastern China's Jiangsu province, on March 17, 2021. (STR/AFP via Getty Images)
Taiwan

China has hit Taiwan with several economic sanctions following U.S. House Speaker Nancy Pelosi’s high-profile visit to the island. Among them is a ban on natural sand export to Taiwan aimed at hurting some of its industries, including semiconductors. However, Chinese media recently disclosed that China does not produce the high-purity sand required for chipmaking but instead relies on imports.

On Aug. 3, China’s Ministry of Commerce suspended its natural sand exports to Taiwan. The move was widely seen as part of the retaliatory measures taken by Beijing over Pelosi’s visit.

People often associate sand with silicon, the primary raw material for semiconductor chips. However, silicon is derived from high-purity quartz sand that can only be produced in a limited number of countries, mainly the United States and Australia.

A recent article on NetEase, a Chinese online news platform, revealed that China does not produce the kind of sand for chipmaking but instead spends over 1.3 billion yuan (about $192 million) yearly importing natural sands.

“Many people think that natural sand is the core raw material for chipmaking, and China has an abundance of such resources, but this is not the case,” the article said.

“Natural sand primarily refers to the sand with industrial or construction purposes, such as river sand, sea sand, etc. Only quartz sand is used for chipmaking, and it also must be of high purity, with a silicon content of 99.999 percent. And even that, subsequent purification processes are needed to produce a satisfactory silicon wafer.”

The article added that China has no high-purity quartz sand, whereas the United States has a near-monopoly.

A researcher at the Chinese Academy of Geological Sciences’ Mineral Resources Institute, Wang Jiuyi, said in one of his papers that the U.S. State of North Carolina contains the largest known high-purity quartz mines in the world. He added the state’s Spruce Pine Mining District is the only deposit with over 10 million tons of raw material reserves.

Although China is rich in siliceous resources, most deposits are common silica ore for ordinary glass, stone, and construction sand. Additionally, China has no mines specializing in producing high-purity quartz raw materials. Thus, it must import large amounts of high-purity quartz sand, raw ores, and high-end quartz products every year, Wang said in his paper.

Natural sand is formed primarily through rock weathering, a natural process. Rock particles with a particle size less than 5mm are widely used in construction, concrete, machinery, casting, and other industrial purposes, including quartz sand, the core raw material for making semiconductor chips.

The report indicates that China has been importing natural sand since 2014. However, at that time, the import volume was lower than the export volume. As the demand for natural sand in construction and other industries expanded, in 2018, China’s natural sand imports exceeded exports for the first time.

By 2021, the import volume of China’s natural sand has reached four times its export volume, reaching an import value of over 1.3 billion yuan (about $192 million) per year.

In the first half of 2022, China’s import volume reached 2.012 million tons in the category of silica sand (and quartz sand) alone, a total value of 680 million yuan (about $101 million).

“You must know that Jiangsu Pacific Quartz is the only company in China capable of producing high-purity quartz sand on a large scale. … It basically represents the entire domestic industry. But the fact is, the key to the raw materials is in the hands of others.”

Taiwan: The Impact Is Limited

In response to China’s suspension of natural sand exports, Taiwan’s Ministry of Economic Affairs said its reliance on Chinese sand and gravel this year has dropped significantly regardless of the ban, and Chinese imports of natural sand account for less than 1 percent.

The ministry said that the domestic production capacity is currently self-sufficient, and the ban is expected to have little impact on its related industries, adding that Taiwan’s import of sand and gravel from China peaked in 2016 and has since declined.