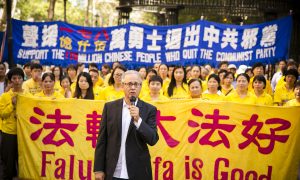 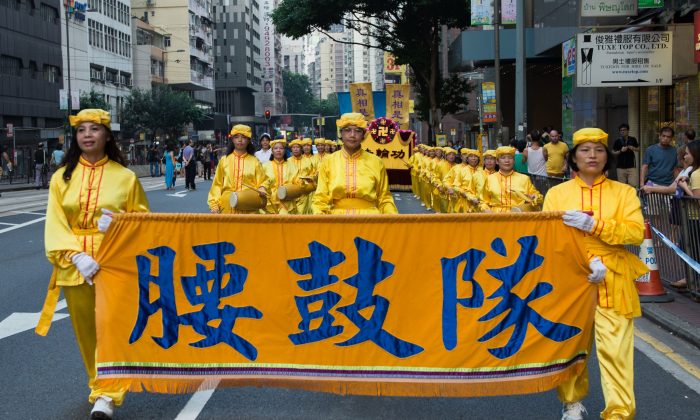 Falun Gong practitioners along with people from the global center for quitting the Chinese Party, march in a parade down the streets in Hong Kong to protest China's National Day on Oct. 1, 2014. (Benjamin Chasteen/Epoch Times)
China

China’s National Day Turned Into March of Remembrance for Dead

HONG KONG—What is taken as a day of celebration by the Chinese state has been inverted into a ‘Remembrance Day’ by one of the largest overseas groups whose vision for China’s future doesn’t include the Chinese Communist Party. The Chinese term is usually reserved for memorializing the war dead, but in this context refers to the deaths and violence under communism in China.

At least 500 practitioners of Falun Gong, a spiritual discipline that has been persecuted in China since 1999, marched through the center of Hong Kong island’s urban area on Oct. 1, beginning in the east at North Point and ending about four miles away at the Communist Party’s Liaison Office to Hong Kong, on Connaught Road West.

The entire contingent, marching past luxury Gucci outlets in Central, and mom and pop incense shops in Wan Chai, was long enough to take about 10 minutes to fully pass a given bystander.

On a few occasions the march intersected with students and young people that were occupying various parts of Hong Kong to further demands for genuine universal suffrage. The two groups seemed mostly to keep to themselves.

In China, National Day was celebrated with propaganda on state run television, and what were supposed to be rousing speeches by the Party’s leaders.

In Hong Kong, Chinese state banks and other official buildings flew the Five Star Red Flag of the People’s Republic of China, as well as advertisements celebrating the anniversary of Mao Zedong’s founding of the PRC.

Those who marched past held banners saying “See through the lies,” “Falun Dafa is good,” and lines from poems that predict happier days for China when the Party is no more.

Falun Gong, which is also known as Falun Dafa, is a traditional spiritual practice that includes meditative exercise and the moral precepts truthfulness, compassion, and tolerance. The group does not have leaders or a formal organizational system, but there are probably thousands of Falun Gong practitioners in Hong Kong, according to estimates by several participants in the parade.

There are hundreds of thousands of practitioners in Taiwan, according to an estimate by Chang Ching-Hsi, the head of the Taiwan Falun Dafa Association. Several hundred of these made their way to Hong Kong recently to participate in the ‘National Remembrance Day’ event.

At least 100 of the participants, most from Taiwan, performed in the Celestial Marching Band, a brass troupe that sets the pace and kept the parade lively.

A short while later, two masseuse also on Queens Road cracked open their second story window and began gesticulating at the banners while talking to one another.

Once the parade reached the Party’s Liaison Office, the large group disbanded, while a smaller contingent held banners and read a “solemn statement” in front of the tower.

The statement, read in Mandarin and then Cantonese, discussed the Party’s manipulation of history, and attacks on traditional Chinese culture, and violent campaigns against the Chinese people, launched successively since the establishment of the PRC, in which around 70 million have been killed.

“Around the world, conscience is manifesting and justice is being upheld,” the statement read, “forming a historic current that is saying ‘no’ to the Chinese Communist Party.”