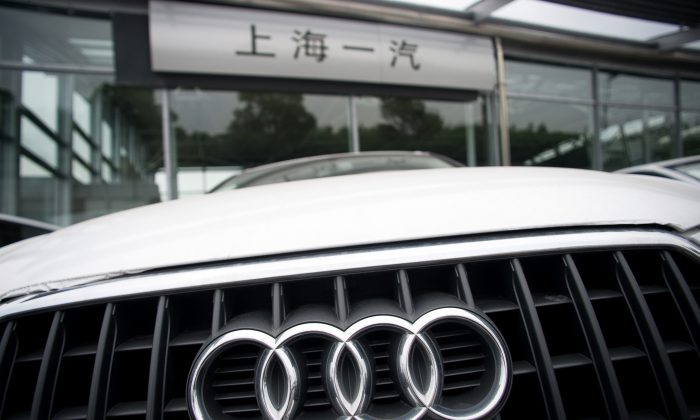 An Audi is pictured in front of a car dealer in Shanghai on Aug. 6, 2014. German luxury car maker Audi and Chrysler of the United States have committed 'monopoly behaviour' in China and will be punished soon, the country's regulator said. (JOHANNES EISELE/AFP/Getty Images)
Business & Economy

China’s National Development and Reform Commission (NDRC) has been rather busy lately protecting Chinese consumers from “monopolistic behavior” by Western companies. Or not.

In fact, the accusations against the American companies Microsoft and Chrysler and German car companies Audi and Daimler are clearly geared toward ensuring another monopoly stays in place: The CCP’s monopoly on power.

If there is one thing economists from different schools of thought agree upon, it’s that monopolies are bad; mostly for the consumer, but also for the economy as a whole. One firm maximizes its profit, creating losses for consumers and other potential producers alike.

So it should be good news if China cracks down on Microsoft and Daimler in order to reduce prices for consumers.

However, it’s China, so things are not that simple.

First of all, we have to get terms straight here. Even if the car dealers colluded to sell spare parts at a higher price, this would be oligopolistic behavior, not monopolistic behavior. Furthermore, even if the supply of a series of spare parts (let’s say, just the ones for Mercedes cars) is a monopoly—which it is—customers still have the choice to buy another car, which has cheaper spare parts.

If all car manufacturers in China collude to keep spare part prices high, then again, we would be talking about an oligopoly and not a monopoly.

In the case of Microsoft, which the regulator accuses of having a monopoly position with its Windows operating system, it becomes even more ridiculous. According to several studies, most consumer PCs in China run pirated versions of Windows, so Microsoft is hardly benefitting.

Of course, the mislabeling of the alleged transgression is just a small joke compared to the real monopolies in China: banking, telecom, and resources.

Yes, there are five different state-owned banks and a couple of smaller private ones, but the CCP effectively controls the big five and they enjoy monopoly access to central bank financing. So you see negative real interest rates on deposits all around, and consumers have the privilege of financing the Chinese lending and construction binge—at a substantial loss to their purchasing power.

Or China Mobile, which hoards tens of billions of dollars in cash and pays a handsome dividend to its majority owner: the government. Why not pass on some of that surplus to consumers? No, thank you kindly.

Clearly the NDRC is so busy investigating the foreign automakers, it doesn’t have the capacity to look into these trivial matters.

Everything that serves the ruling regime works, and in this case harassing a few foreign companies goes a long way to achieve two things.

First of all, the investigations and potential penalties (1–10 percent of total 2013 revenues) will please China’s ally Russia. Russia has been slapped with some nasty sanctions recently by the West, so it probably pulled a few strings to show Western countries it’s not alone in this economic fight.

But more importantly, China also stands to benefit if it forces these companies to lower prices. The lackluster housing market is hurting consumer confidence and some on the ground intel points to lower sales of big ticket items, which will inevitably lead to slower growth.    Lower prices could boost consumer spending on big-ticket items, albeit only for the short term, and the ruling CCP needs a humming economy to reduce the chance of political upheaval.

But the really sad part of the story is that most companies are bending over backward to comply with the Chinese regime’s wishes. Daimler and Audi already announced price cuts for spare parts. Microsoft said it’s cooperating with the regime.

German car companies are especially vulnerable to the demands. Audi, BMW, and Daimler sold 630,000 cars in China last year and almost all of their growth comes from there.

But they are not the only ones. Apart from the rampant censorship within China (Facebook), LinkedIn has recently admitted it also censors profiles of some of its members in the West if they include certain China sensitive information, for example about the spiritual practice Falun Gong.

After having been forced to self-censor and also having suffered numerous cyberattacks, Google moved out of China in 2010. Its revenue has risen 250 percent since then, along with other financial metrics.

It would be nice to see more Western companies taking the Google approach. Alas, for companies having to sell physical products they can’t easily move elsewhere, this is wishful thinking.