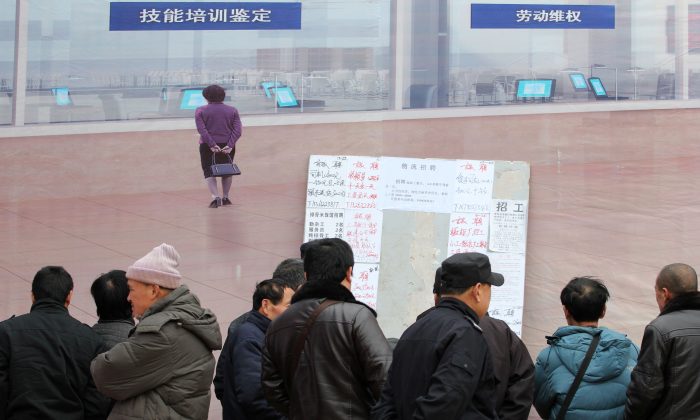 For years, the only thing the Chinese regime was worried about was unemployment and inflation.

Both of these things make Chinese people very unhappy and go against the promise of the regime to make it possible for some to get rich while it continues its backward and destructive social policies.

Given the surprise interest rate cut over the weekend, it seems China is now worried about something else, because inflation and unemployment are relatively stable.

They might worry about what a late scholar from Chicago had to say about debt bubbles and the moment when they burst. That point is called a “Minsky Moment,” named after University of Chicago economist Hyman Minsky.

Minsky focused on the transition of the financial system from productive financing to speculative financing to Ponzi financing without collateral to the moment when the whole structure comes crashing down, similar to what happened in the U.S. subprime market in 2007.

In China, which created $15.4 trillion worth of debt in just five short years, cracks are starting to show. First, credit creation, the most important factor in keeping the party going, has slowed markedly and with it has GDP growth.

According to Bank of America, total social financing, which includes bank loans and other means of financing, only increased 15.2 percent in the third quarter. This is the lowest level since 2005, when China’s GDP was about half its current size.

The problem: Less credit created means fewer investments, which means less growth. Less growth means less opportunity for existing creditors to finance their debts. This is a common problem in Ponzi economies, as growth is not based on underlying or natural production but rather speculation on more debt creation.

So the process depends on itself and is only carried by confidence in itself, in a process George Soros termed “reflexivity.” Because of the slowdown in credit and growth, we have now seen the biggest bankruptcy in China last week in the form of an unproductive steel mill, Haixin Iron & Steel Group. Bad loans grew the fastest since 2005, and analysts predict more bankruptcies.

The reason: Policy makers tightened credit in 2013, and firms adapted to the new conditions in 2014 by slowing down capital expenditure. This is exactly the same process as the Fed’s rate hikes in 2006, which were supposed to soften the housing bubble but ultimately crushed it.

Again similar to the Fed, the PBOC is now lowering rates in an effort to decelerate the deflation. As with the Fed’s rate cuts in late 2007, this move is too little too late because firms and consumers already shifted their outlooks and are not taking on more debt.

In fact, just with subprime, debt on the fringe in China is already shrinking on an absolute basis: Trust loans and bankers’ acceptances declined by 22 billion yuan and 241 billion yuan, respectively, in October.

In order to halt the deleveraging, the PBOC must do what the Fed did. Monetize government debt. Of course, the PBOC has printed more money than the Fed during the last decade, but curiously enough, it was monetizing U.S. Treasurys to keep the exchange rate stable.

This time, it will have to monetize Chinese central government debt to flood the market with liquidity and force people to buy houses and stocks again. Because if a Minsky Moment comes true and the credit system comes crashing down, the Chinese regime will have to seriously worry about unemployment again.