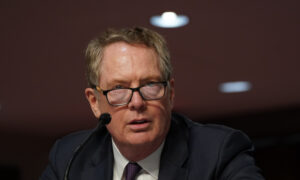 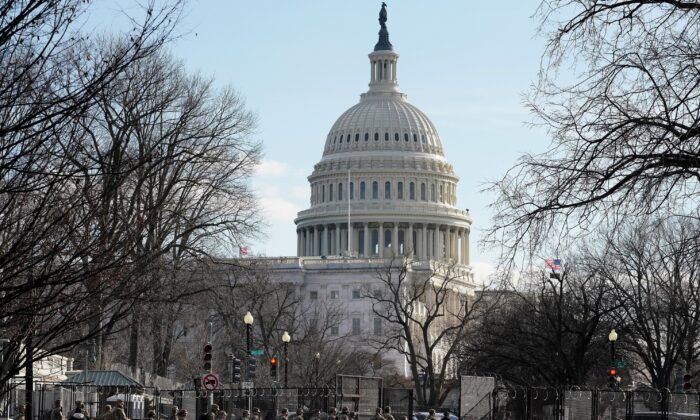 National Guard troops are shown near the U.S. Capitol following the inauguration of President Joe Biden in Washington on Jan. 20, 2021. (Nathan Howard/Getty Images)
Thinking About China

China’s state-run media Xinhua published an article on Jan. 21, titled “Farewell, Trump,” which was ranked first as top news. This one-paragraph article with less than 200 Chinese characters stated: “Trump steps down … in the past four years, the world has not seen America become ‘great again’… the ‘beacon’ is collapsing, and ‘a city upon a hill’ myth is being shattered.”

Joe Biden was sworn in as the 46th president of the United States on Jan. 20. The Xinhua article claimed that the United States was “collapsing.” Around the same time, the Ministry of Foreign Affairs also announced sanctions on former Trump administration officials and asked President Biden to “clear mines.”

The top leaders of the Chinese Communist Party (CCP) have recently repeated the propaganda targeting Biden but received no response. The current U.S.-China relationship is giving the CCP a lot of pressure. The CCP hoped that Biden would help to “clear mines,” but the regime has recently adopted more confrontational tactics. The outcome may be counterproductive again.

Is the CCP Severing Ties With the US?

The Xinhua article’s headline, “Farewell, Trump!” was very similar to Mao Zedong’s 1949 article, titled “Farewell, Leighton Stuart!” I doubt if the CCP is aware of the fact that when Mao published his article, it meant the end of the era of befriending the United States. Stuart’s leaving was a symbol of the CCP’s long-term policy of making the United States the No. 1 enemy. That policy has never changed. The CCP officially closed the door to the United States and chose to go one-sided to the former Soviet Union. In 1950, the CCP sent troops to North Korea to fight a proxy war for the former Soviet Union. The casualties were tragic and severe.

Based on the tone of Xinhua’s article, is the CCP preparing to sever diplomatic relations or even go to war with the United States?

The former U.S. ambassador to China, Terry Branstad, left his post in October last year and a successor has not been appointed yet. The CCP should have been anxious to restore the U.S.-China relations with the Biden administration. Even if relations cannot return to the same state as it was under the Obama administration, both countries can at least try to stop the decoupling process, including the cancellation of a series of sanctions and even high tariffs on Chinese goods imposed by the Trump administration.

Judging from the public announcements made by the Ministry of Foreign Affairs, the CCP is very concerned about the attitude of the United States. However, since there’s no public response from Biden, the CCP is trying hard to pressure him to submit to their will.

In November last year, after Biden announced his winning the election, he began the process of forming a team and continued to communicate with world leaders. But so far, there has been no communication between Biden and Chinese leader Xi Jinping, otherwise the state-run media would have made it loud and clear.

In the last four years, the Trump administration has confronted the CCP on a range of issues, including unfair trade practices, espionage, malign influence in the United States, security threats posed by Chinese technology, and its human rights abuses against religious minorities and Hong Kong residents. From the end of March 2020, Trump cut off the channel of communication with Xi. Experts suggest that the Chinese regime interfered in the 2020 U.S. presidential election to ensure that Trump doesn’t get re-elected for a second term, as Chinese state-run media have openly stated their preference for Biden.

Biden’s critics have expressed concerns that the new administration would be soft on China. The CCP hopes that Biden can reverse Trump’s policies. On Jan. 19, China’s state-run media Global Times reported that any changes that Biden made “will at least be better than Trump’s policies,” quoting a Chinese researcher from the state-run Chinese Academy of Social Sciences. So far, the CCP has not received a response from Biden.

At a press briefing on Jan. 21, the spokesperson of the Ministry of Foreign Affairs, Hua Chunying said, “… President Biden has repeatedly stressed the term ‘unity’ in his inaugural address, which is precisely what’s needed in current China-U.S. relations.”

The so-called “unity” is a term used by the CCP with socialist and communist connotations. Does that mean Hua regards Biden as a “comrade?” She expects a lot from him. Hua said, “In the past few years, the Trump administration, especially Pompeo, has laid too many mines, burned too many bridges, and destroyed too many roads in China-U.S. relations, which are waiting to be cleared, rebuilt, and repaired.”

Hua’s statement was quickly published and placed in a prominent spot on Xinhua’s homepage—this was surely an order from the top. The Trump administration’s tough-on-China policies have really hurt the CCP’s top leaders, and the CCP has been forced to face the issue of its own survival.

On Jan. 20, the CCP announced sanctions against 28 former officials under the Trump administration, including former U.S. Secretary of State Mike Pompeo and former national security adviser Robert O’Brien. The Xinhua report on this announcement ranked second on its “hot news list.”

At the press conference on Jan. 21, a Bloomberg reporter asked: “The U.S. National Security Council spokeswoman called China’s sanctions on Trump officials ‘unproductive.’ She said that President Biden is looking forward to working with leaders in both parties to position America to out-compete China. What is the foreign ministry’s comment?”

Hua responded, “We hope the new U.S. administration … uphold the spirit of non-conflict, non-confrontation, mutual respect, and win-win cooperation … and bring China-U.S. relations back onto the track of sound and stable development.”

The CCP contradicts itself. While it calls for “non-conflict, non-confrontation” with the United States, it does not regard its sanctions against former U.S. officials as an attack. While the CCP asked Biden to “demine,” it set up mines for itself.

During the Jan. 21 press conference, a Reuters reporter asked: “Was the Chinese ambassador invited to President Biden’s inauguration ceremony? Taiwan’s representative to the United States attended the ceremony. I wonder what’s your comment?”

Hua’s answer revealed the CCP’s attitude toward Taiwan. Although the Chinese Embassy in the United States was invited, it is very likely that it did not want to attend Biden’s inauguration. Cui Tiankai, the CCP ambassador to the United States, would be the one to attend such events but there was no report of him being there. Instead, the representative of Taiwan in the United States released pictures and information on the ceremony. I think that the CCP was expressing their dissatisfaction over Taiwan’s attendance by not allowing Cui to attend Biden’s ceremony, and perhaps it sent the lower-level personnel to attend the event instead.

When Bloomberg asked if China plans to send a delegation to the United States to meet with the Biden administration, Hua responded, “There’s no information to offer at this moment.”

If the CCP chose not to send its ambassador to Biden’s inauguration, it is tantamount to severing diplomatic relations and sends a strong signal of wanting to fight with the United States. In addition, leaders of various countries openly congratulated Biden on his inauguration last month, but Xi Jinping did not. It actually shows that the top CCP leaders are seriously dissatisfied with Biden’s lack of response.

Several important cabinet members nominated by Biden were asked about their stance on China during their confirmation hearing in the Senate last month. Their answers should have annoyed the CCP.

The Secretary of State nominee Antony Blinken said, “I think that what we’ve seen in recent years, particularly since the rise of Xi Jinping as the leader, has been that the hiding and bidding has gone away. … They are much more assertive in making clear that they seek to become in effect the leading country in the world, the country that sets the norms, that sets the standards, and to put forward a model they hope other countries and people will ascribe to.”

Blinken said that the United States can outcompete China. He also said that the United States will uphold its commitment under the Taiwan Relations Act to ensure that Taiwan, a self-ruled democracy, has the ability to defend itself against aggression. Blinken agreed with the previous administration’s assessment that China committed genocide against the minority Uyghur Muslims in Xinjiang.

Blinken also agreed that China had misled the world on the spread of the COVID-19 pandemic.

Biden’s defense secretary pick retired Gen. Lloyd Austin expressed his support for Taiwan when senators asked if he would be ready to support the self-governed island if Beijing decided to take it by force. Austin said, “… I see China in particular as a pacing challenge for the department. … Our efforts will be to ensure that we do everything to make sure that China doesn’t take that decision. … And certainly, I’ll make sure that we’re living up to our commitments to support Taiwan’s ability to defend itself.”

On the importance of the Chinese intelligence threat, Avril Haines, Biden’s choice for the top U.S. intelligence job, said she would make it a priority to devote more resources to China.

“Our approach to China has to evolve and essentially meet the reality of the particularly assertive and aggressive China that we see today,” she said. “I do support an aggressive stance, in a sense, to deal with the challenge that we are facing.”

Biden’s nominee for secretary of the Treasury, Janet Yellen, told lawmakers that China is clearly “America’s most important strategic competitor.” She said, “China is undercutting American companies by dumping products, erecting trade barriers, and giving illegal subsidies to corporations. … We’re prepared to use the full array of tools to address ….”

Regarding China’s sanctions on former Trump administration officials, Emily Horne, a spokesperson for Biden’s National Security Council, said, “Imposing these sanctions on Inauguration Day is seemingly an attempt to play to partisan divides. … President Biden looks forward to working with leaders in both parties to position America to out-compete China.”

Of course, these statements are not what the CCP expected from the new U.S. administration. Recent actions of the CCP, including continuous military drills, and high-profile interactions with North Korea and Iran, seem to be self-defeating.