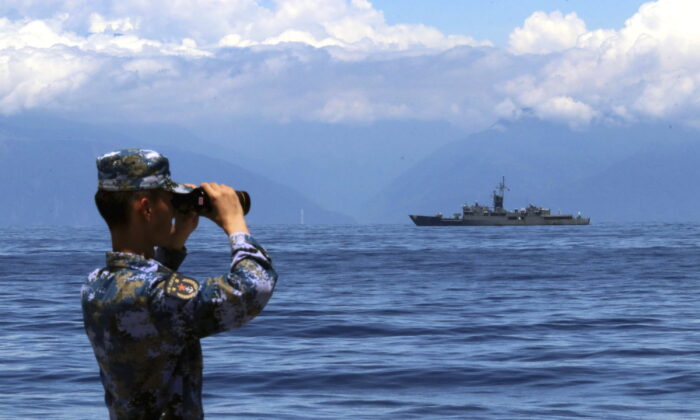 China is the biggest consumer of semiconductor chips in the world, but its production rate is less than 20 percent of its needs.

In particular, electromechanical products, which account for half of China’s export revenue, including automatic data processing equipment, cellphones, home electronic appliances, automobiles, and ships, all rely on chips as an essential component.

China’s chip imports have surged as a result of the huge imbalance between supply and demand.

China’s reliance on chips manufactured in Taiwan cannot be overstated.

As the world’s largest chip foundry, Taiwan plays a critical role in the global semiconductor supply chain, especially for high-end chips, in which Taiwan dominates global trade with a more than 90 percent market share.

In 2020, when Chinese companies were stockpiling chips ahead of U.S. restrictions, chip purchases from Taiwan accounted for one-third of China’s total chip imports.

Currently, the United States is further restricting exports of key semiconductor equipment and technology to China.

In December 2020, the U.S. Department of Commerce’s Bureau of Industry and Security added China’s largest chip manufacturing company, Semiconductor Manufacturing International Corporation (SMIC), to its list of export-controlled entities, prohibiting the sale of chips and manufacturing equipment to SMIC for chips 10 nanometers or less in size.

On Aug. 9, U.S. President Joe Biden signed the Chip and Science Act 2022, to prevent the flow of funds to China’s semiconductor industry. The act, in addition to providing subsidies to U.S.-based chip companies, stipulates that companies receiving such subsidies cannot expand chip capacity in China for advanced processes below 28 nanometers for 10 years. In other words, they cannot invest in advanced semiconductor manufacture in China.

On the Taiwan side, Pelosi vowed during her trip that the United States will never renege on its commitment to the island, pledging “ironclad” support for democracy.

In 2015, the CCP launched the “Made in China 2025” campaign, with the goal of increasing China’s IC self-reliance ratio to 70 percent by 2025. Over the years, a total of 1.5 trillion yuan (about $232 billion) has been raised, but China’s chipmaking has made slow progress.

According to IC Insights, from 2014 to 2021 China’s IC production share of the Chinese market increased from 15.1 percent to 16.7 percent, and was expected to increase to 21 percent by 2026, which is still far from the CCP’s goal of chip autonomy.

Beijing’s hostility toward Taiwan is already driving Taiwanese talent away from mainland China. At the same time, the United States, Japan, European countries, and India are ramping up the building of domestic chip plants, which may attract Taiwanese companies to expand into these countries.