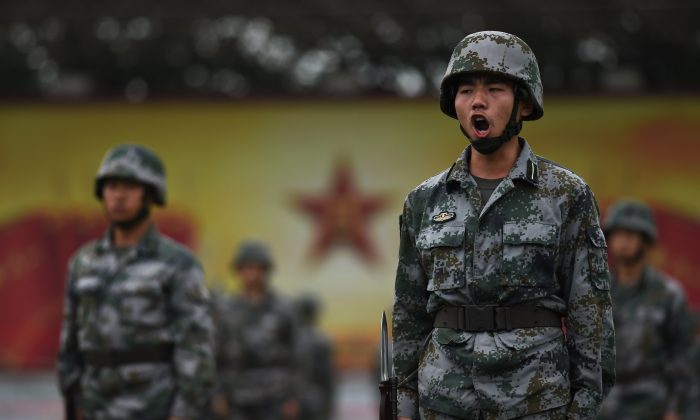 A friend of mine who went to school in China told me a story about a test he and other kids were given. One question was along these lines: “During the Korean War, a Chinese fighter pilot shot down an American plane, despite having inferior equipment. Why was he able to do this?”

The answer to that question, my friend said, was “the Chinese pilot had the spirit of Communism.”

China’s current air force, and its military as a whole, is still running on that concept. Rather than focus on actual combat training, members of the Chinese military spend much of their time in forced study groups on Communist doctrine.

The military guidance to train less and study more Communism was passed down by the ruling Chinese Communist Party, and on Aug. 28 it added to this strategy.

New regulations, approved by the People’s Liberation Army General Political Department, say its military must participate in the party’s “provisions of organizational life.”

Among these “provisions,” detailed on China’s state-run Xinhua news agency, are reminders to attend communist party activities and lectures, and to generally assimilate to the regime’s required lifestyle. It also reminds them to pay their party dues.

The recent doctrine adds to a blueprint to reform the Chinese military announced by the communist party in November last year.

The goal, according to Xinhua, is to build an army that “obeys the Party’s command, is capable of winning battles and has a sound work style.”

The Diplomat summarized the problem in a Jan. 31 report. It stated, regarding the Chinese military, “… an army that spends too much time training is an army that is not engaging in enough political indoctrination.”

The People’s Liberation Army “has to engage in constant ‘political work’ at the expense of training for combat,” The Diplomat states. Thus, 30 to 40 percent of a Chinese military officer’s time “is wasted studying CCP propaganda, singing patriotic songs, and conducting small group discussions on Marxist-Leninist theory.”

For the United States, China’s untrained and Communist indoctrinated military spells trouble—as was seen in the recent near-collision between a U.S. spy plane and a Chinese fighter jet.

On Aug. 19, a Chinese Shenyang J-11BH fighter jet did a barrel roll over a U.S. Navy P-8A maritime surveillance aircraft.

He said the Chinese jet first crossed directly under the U.S. aircraft, coming between 50 and 100 feet from collision, then passed the nose of the plane while upside down to show off its weapons. The Chinese pilot then came within 20 feet of the American plane’s wings before doing the barrel roll just 45 feet over it.

U.S. military officials, according to Foreign Policy, said the incident was particularly dangerous since “many Chinese fighter pilots are not necessarily well trained.”

Kirby said the provocative actions by the Chinese pilot were “pretty aggressive and very unprofessional.”