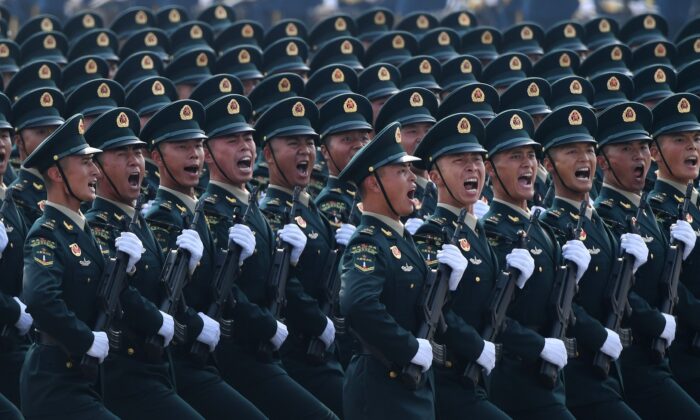 Chinese troops march during a military parade in Tiananmen Square in Beijing on Oct. 1, 2019. (Greg Baker/AFP via Getty Images)
Thinking About China

China announced on March 5 that it would increase its defense budget by 7.1 percent in 2022, to 1.45 trillion yuan ($230.16 billion). This is Beijing’s largest annual increase in military expenditures in three years.

The last time China increased its defense budget by more than 7 percent was in 2019, when it rose 7.5 percent.

What should we make of a 7.1 percent increase in Chinese military spending? On the one hand, Chinese defense spending has increased annually since the mid-1990s—that is, for over 25 years.

In 1997, Chinese military expenditures amounted to only $10 billion, which was roughly on par with Taiwan and significantly lower than the defense budget of Japan or South Korea.

Starting around the late 1990s, however, China began to experience double-digit real growth (that is, after taking inflation into account) in defense spending nearly every year. Even according to its own official national statistics (which many experts believe substantially understates actual spending levels), China’s defense budget from 1999 to 2008 expanded at a rate of 16.2 percent per annum.

This trend remained basically unchanged throughout the first half of the second decade of the 21st century. Between 2009 and 2015, for example, Chinese military expenditures grew from 481 billion yuan ($70.3 billion) to around 886.9 billion yuan ($141.45 billion). Overall, between 1997 and 2015, Chinese military expenditures increased by at least 600 percent after inflation.

As a result, China has become the second-largest defense spender in the world (behind—no surprise here—the United States). Chinese defense spending outstrips that of all other Asian and all European militaries, including Russia’s.

Since the mid-2010s, however, this annual rise has been slowing. In 2016, the defense budget grew just 7.6 percent over 2015; this was followed by similar single-digit increases from 2017 to this year. Obviously, the days of double-digit growth in Chinese military expenditures are over, and Chinese defense spending will be much more modest in the years to come.

Of course, everything is relative: most militaries would kill for “only” a 7 percent increase in defense spending. And it’s important to keep in mind that these are reductions in budget increases, not defense cuts.

What’s more, Beijing’s munificence to the People’s Liberation Army (PLA) has been remarkably affordable: despite the increases over the past 25 years, the country still spends only around 2 percent of its GDP on the military.

Nevertheless, it’s likely China can no longer afford double-digit increases in military spending at a time when economic growth in China is slowing overall. Between 1998 and 2007, China’s GDP expanded at an average annual rate of 12.5 percent. Since 2010, however, GDP growth has fallen every year, and in 2022, it will be only 5.5 percent—China’s lowest growth in 30 years (and some think that target is overly ambitious).

Even at 7.1 percent, therefore, Chinese defense spending is outstripping its national GDP growth. While defense spending growth may be slowing in China, Beijing’s capacities for becoming a global power are hardly lessening. It may not have as much to spend on its military in the coming years, but it’s still able to throw a lot of money at the PLA.

In particular, keep in mind this one contention: that the PLA devotes roughly one-third of its military budget to “equipment.” This figure is based on early Chinese defense white papers (later, the PLA stopped providing any breakdown of its defense budget beyond a topline figure).

The “equipment” budget presumably includes funding for procurement, arms imports, and research and development. Apply this “one-third” formula to China’s 2022 defense budget, and the budget for equipment comes out to around $76.7 billion.

A budget of $76.7 billion outstrips the entire defense budgets of Japan, South Korea, France, Germany, or the United Kingdom. In fact, it would likely make any country the world’s third-largest defense spender, behind the United States and perhaps India.

This much money can buy a lot of equipment, and it shows. China is currently building its second indigenous aircraft carrier, and it’s developing a new long-range stealth bomber and a large transport aircraft comparable to the U.S.-built C-17.

At the same time, the Chinese regime has not abandoned its militarization of the South China Sea, its efforts to expand into the Indian Ocean (including the establishment of its first overseas military base in Djibouti, on the Horn of Africa), or its ambitious Belt and Road Initiative.

Even in a period of slow growth, therefore, don’t expect Beijing’s ambitions to become a modern, world-girdling superpower to abate or even slow much. A “world-class” PLA capable of projecting military power around the globe is an integral part of this plan.

Consequently, there is no constituency inside China’s political and military elites in favor of halting the buildup of the PLA. Just the opposite, in fact: the Chinese Communist Party and the PLA have an unwavering and unified commitment to turning China’s military into a modern, 21st-century fighting force.