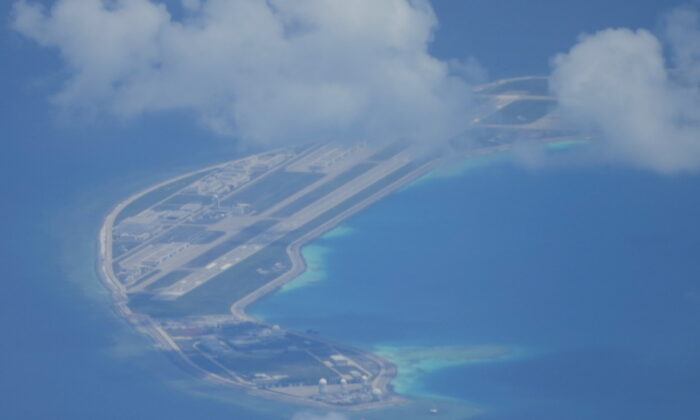 An airstrip made by China is seen beside structures and buildings at the man-made island on Mischief Reef at the Spratlys group of islands in the South China Sea are seen on Sunday March 20, 2022. (AP Photo/Aaron Favila)
Military

The militarization of islands in the South China Sea is an indicator of the Chinese regime’s desire to dominate the region and send a message to the rest of the world, according to security analysts.

Recently, the Commander of the U.S. Indo-Pacific Command, Adm. John Aquilino, revealed that the Chinese regime has fully militarized at least three islands in the disputed South China Sea.

The Chinese Communist Party claims the vast majority of these strategic waterways, a region disputed by several other Southeast Asian states. While Beijing’s territorial claims have been rejected by an international tribunal, it has sought to assert its claims by building and militarizing artificial islands in the area.

This development confirmed by Aquilino marks “a significant escalation in the People’s Republic of China’s (PRC) strategic goal of extending sovereignty over the South China Sea,” according to James Fanell, a former director of intelligence and information operations for the U.S. Pacific Fleet.

He also considered this goal “a fundamental element of General Secretary Xi Jinping and the CCP’s widely publicized ‘great rejuvenation’”—a plan viewed by officials and analysts as revealing Beijing’s plan to replace the United States as sole superpower by 2049.

Retired U.S. Navy Cmdr. Kirk Lippold agreed, saying that the world is witnessing the CCP’s long-term pursuit of regional, and ultimately, global dominance. To reach its goal, he said, the regime is using a range of “instruments of national power,” which are diplomatic, economic, informational, and military in nature.

The CCP wants to “negotiate their position in the world from a position of strength—economic dominance and military dominance,” said Lippold.

To do that, the Chinese regime has leveraged the theft of intellectual property from around the world, especially the United States, to help build an economy that Lippold said “basically pulled the world in to become dependent on them in both resources and manufacturing.”

Although the World Bank and other United Nations body still considers China to be a developing nation, Lippold said, “China has manipulated world opinion for the last two decades to get everyone to believe that they are still a developing nation.”

In 2019, the China National Space Administration landed a robotic spacecraft on the “dark side” of the moon for the first time in history. And in 2021, China tested a nuclear-capable hypersonic glide vehicle, circling the globe through low-orbit space.

Given these, Lippold said, it’s ludicrous to consider China a developing nation when they have the ability to send spacecraft to the moon and test hypersonic missiles. “These are things first-world nations do, and you have to have economic power to do that,” he said.

Lippold said the Chinese regime is clearly gaining the economic and military might to be able to project power into the Taiwan Strait, over Taiwan, into the South China Sea, and around the rest of the world.

An estimated 60 percent of maritime trade passes through Asia, about one third by volume passes through the South China Sea, according to estimates by The United Nations Conference on Trade and Development. “The CCP wants to be able to interdict and control this flow of that traffic, because they know that controlling the economic flow of goods brings them one step closer to becoming a dominant world power,” Lippold said.

The Chinese regime’s militarized islands are “a very dangerous development, and the United States—who has essentially been silent on the matter—better take a long, hard look and understand that this can’t result in a pivot to China,” he added.

He said Beijing’s actions must be stopped. “If that pushes toward confrontation, then maybe that’s what’s going to have to happen.”

The Chinese regime must not be allowed to “get into a position where they use those islands to project power in a manner that threatens our economy, our allies, and our military operations in that part of the world,” Lippold said.

Ultimately, Fanell said, “the full militarization of the artificial islands with anti-aircraft and anti-ship weapons is designed to make national security policy makers in Washington D.C. reconsider coming to Taiwan’s defense through the South China Sea.”

The CCP’s militarization of the South China Sea represents “a significant change in the military balance of power in the Indo-Pacific region,” Fanell said.

“It puts further pressure on the United States to increase its military presence and capabilities in the region and to redouble its efforts at establishing basing and armament stockpiles in like-minded allied nations that do not wish to be under the dictatorial thumb of the CCP.”

Lippold believes that if a “punching war” with the Chinese navy over Taiwan were to occur today, the United States would dominate.

However, he is concerned about the CCP’s build-up of naval vessels. According to a March report by the Congressional Research Service, China’s People’s Liberation Army-Navy (PLAN) has a battle force of approximately 355 platforms, which surpasses that of the U.S. Navy numerically. By 2025, the PLAN’s battle force is expected to increase to 420 ships by 2025 and 460 ships by 2030, the report said.

“When this amount of hardware is put to sea,” Lippold said, “it’s going to begin to be a challenge, if not outright rival, to the United States Navy.”

Every time they put a new vessel to sea and conduct various training exercises from this day forward, he said, “they are gaining operational experience at sea, and honing the edge of a sword.”