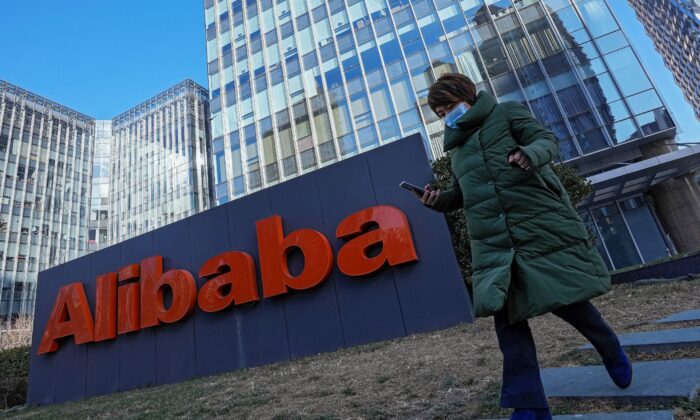 A woman wearing a protective mask walks past the offices of the Chinese e-commerce firm Alibaba in Beijing, on Dec. 13, 2021. (Andy Wong/AP Photo)
Social Issues

TAIPEI, Taiwan—Human resources and upper management wouldn’t deal with her accusation of sexual assault, a former employee of Alibaba said. So she went into the busy cafeteria at the Chinese e-commerce giant’s headquarters and screamed out her plight.

Now she’s facing online harassment, accusations of lying from the wives of the two men she accused, and a defamation lawsuit from an Alibaba vice president who was forced to resign. And, she revealed recently, the company fired her.

Women in China often face such troubles if they choose to speak publicly about sexual assault. In multiple high-profile cases, particularly during China’s brief #MeToo movement in 2018, victims were sued by the men who allegedly harassed them. Some have been targeted with online harassment and censored from speaking about their cases.

In the most high-profile case, former Chinese tennis star Peng Shuai disappeared from public view after accusing former high-level official Zhang Gaoli of sexual assault. Her accusation was quickly scrubbed from the internet and discussion of it remains heavily censored.

In such a climate, women’s rights activists fear that fewer victims will be willing to speak up.

“This is helping the wrongdoer, and makes the workplace environment even worse, and it’s an attack on the next woman who wants to stand out,” said #MeToo activist Zhou Xiaoxuan.

The former Alibaba employee told the Dahe Daily, a provincial Chinese newspaper, that she would not encourage other women to come forward, given her own experience of being attacked online and called a liar.

But she said in written responses to questions from The Associated Press that she would continue her fight. She is being identified only by her last name, Zhou, because of harassment concerns.

“I believe, if there’s one case of someone being fired because of upholding their own rights, then there may be more and more such cases, and future victims of sexual assault may have an even more difficult time seeking justice,” she said.

Zhou accused a fellow Alibaba employee, surnamed Wang, and a client surnamed Zhang of sexual assault during a work trip in July. She said she woke up in her hotel room to find Wang kissing and groping her. She also said Zhang molested her while they were all at dinner. The wives of both men, who were not there, have publicly denied the accusations.

Police detained both men in August on suspicion of “forcible molestation,” but released Wang after 15 days, the longest one can be held under administrative detention. Prosecutors dropped the investigation into Wang, though Alibaba fired him. Zhang, the client, is in police custody and a criminal case is pending.

Initially, Zhou thought she would get justice. Alibaba’s CEO Daniel Zhang pledged in a public memo in August to create an anti-sexual harassment policy, and senior leaders vowed to improve management, she said. Two executives Zhou accused of not responding to her allegations resigned. One has since sued her.

“So even though I was already covered in scars, I was still willing to trust the company, and cooperate with the company,” she said in her answers to AP.

Yet, last month, she got a termination letter accusing her of hurting the company. The letter from Alibaba subsidiary Zhejiang Tmall Technology Co. Ltd. said she was dismissed for spreading false information about the assaults and about the company’s handling of the issue.

Alibaba has not responded to requests for comment on Zhou’s termination.

Other victims have faced similar obstacles.

A recent report by researchers from Yale Law School found only 83 civil cases in public Chinese court databases related to sexual harassment or molestation between 2018 and 2020. Among them, 77 were brought by the alleged harasser against companies or the victims. In just six cases, victims sued their harassers.

A large share of the few women who brought forward accusations against harassers during China’s #MeToo movement have faced defamation suits and have lost. That includes journalists Zou Sicong and He Qian. A court ruled in January that they had defamed more prominent journalist Deng Fei, because they did not provide enough evidence that an incident occurred.

Deng sued the women after they published an account on Wechat in 2018 saying Deng had lured He, then 21, to a hotel room in 2009 to discuss story ideas, pulled off her clothes, and tried to kiss and grope her. He and Zou appealed the ruling, which was upheld in a second ruling by courts. The women plan another appeal in a higher court.

Victims face a higher burden of proof in the courts, even when they are being sued.

In 2019, a Beijing court ruled that a young woman, Wang Qi, defamed Zhou Fei, an official at the World Wildlife Fund in China, by accusing him of forcibly kissing her while they worked together. The court ordered Wang to issue a formal apology.

Zhou Xiaoxuan, the activist who has become the face of China’s #MeToo movement, sued state TV host Zhu Jun only after he sued her for defamation. She accused him of groping her when she was a young intern at CCTV.

Zhou got a lot of public support for her case early on and was able to give interviews. These days, her Weibo account has been banned from posting for a year. She said she gets messages attacking her every day.

#MeToo activists, helped by public support in 2018, pushed for changes to China’s laws, including defining sexual harassment in the country’s broad ranging Civil Code, which was ratified last year.

Experts say the national law lacks teeth since it doesn’t lay out any punishments. Enforcement depends on local level regulations and how courts interpret the law and those regulations. Also, many companies lack sexual harassment codes with explicit punishments and mechanisms for redress.

In March, the southern city of Shenzhen issued a new guidance from nine departments including the education ministry and the Public Security bureau on sexual harassment prevention in the first such “systematic” document of its kind.

For now, Zhou, the now ex-Alibaba employee, can only wait for the courts.

Zhou’s lawyer, Du Peng, said in a message they are waiting for the criminal case court hearing for Zhang and petitioning the court to reopen the case against Wang.

Zhou, who chose to answer questions only in written form, said she has felt emotionally “unsteady.” She vacillates from being “overstimulated and excitable” to “depressed and passive.” But she said she would not waver in seeking justice.

“My attitude is resolute,” she wrote. “I will not accept the result of the company’s unsympathetic, unreasonable, and illegal way of dealing with this.”