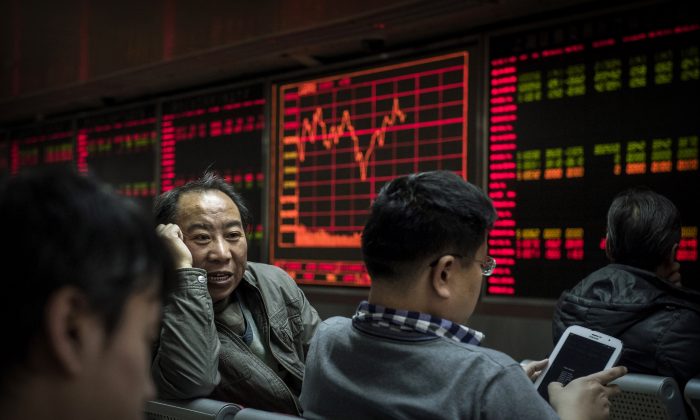 Chinese day traders chat in front of stock tickers on a board at a brokerage firm in Beijing, on Jan 22, 2015. (Kevin Frayer/Getty Images)
China

In 2011, most people still thought China, as a nation, had less debt than Europe or the United States because of its relatively low government debt levels. Then came Fraser Howie’s seminal book Red Capitalism, one of the first books to expose the debt machine within the Chinese banking system and the risks of the debt-filled growth model.

After a six-year-stay in China, Fraser now lives in Singapore and still has one or two things to tell us about China and its economy.

What About the Political Situation in China Today?

The narrative out there is that Xi Jinping and his anti-corruption drive is all about breaking down vested interests and laying the framework for clearing the decks. People think he will allow a clear reform push, that he is actually going to really push through a lot of these third plenum pledges for the market to take the first role and the state the second role. Today there is very little evidence of that. There is hope rather than concrete evidence of it.

Hong Kong is seen as a victory for the CCP in the sense that the streets are cleared and they haven’t given any ground. I think it’s a disaster for the people in Hong Kong because you just alienated a large portion of the population and you have shown that the “one country, two systems” model is highly flawed.

And yet what does Xi do? The same week of the Hong Kong protests, he turns around and tells Taiwan that the only way to reunify with Taiwan is through the “one country, two systems” policy, which the Taiwanese don’t like at all.

Wherever you look around Xi, there are hard lines.
— Fraser Howie, author, Red Capitalism

So you seem to go out of your way to upset people, in Xi Jinping’s case. Whether it’s the Japanese, the Vietnamese, the Filipinos, or the Malays.

China is going out of its way to annoy people and to make people worried. That doesn’t look like a confident nation, a nation that would be attracting others to it.

What Do You Predict?

Anything is possible on the political side. There is effectively a civil war going on politically in China. It’s not going on with guns—not that we see at least—and clearly people are not being taken out and being shot—although people are being executed post corruption purges. But there is a civil war of sorts going on within the Party. And it’s far too early to say how this will play out.

There is effectively a civil war going on politically in China.
— Fraser Howie, author, Red Capitalism

It’s about power, it’s about control, it’s about factions. What’s really scary about Xi is that he is a true believer in the system. He actually believes the Communist Party, Marxist, Leninist, Mao Zedong thought is the solution to China’s problem, which I absolutely think it’s not.

Who is Fighting Against Who?

I don’t think that’s clear. Xi is a man with a mission but he has alienated a lot of the power bases, like the one around Zhou Yongkang for example. I am not defending any of them either. This is more like a Mafia war for dominance. None of these are nice groups. He has taken out the Zhou Yongkang network. Now there are indications he is going after Jiang Zemin and the Shanghai factions.

How does this play out? There is so little transparency politically in China. This is not Westminster or Washington where there is a lot of understanding, off the record briefings. It’s very unclear in China: How loyal is the PLA, who are they loyal to? We see these announcements from Xi saying the PLA must be loyal to the Party. Do you think they are not?

What Do You Think About Xi?

Ten years ago China was relatively easy to read, it was going into one direction. Xi has very much put a cat among the pigeons and shaken things up.

Take a look at the consumption story in the luxury goods sector. So much of that discussion was “China is the next big thing for luxury.” The corruption crack down comes and luxury sales take a hit across the board, you are seeing that in Macao as well.

During the rise of luxury consumption, nobody suggested that 20 percent of it was related to corruption.

Previously you could bribe people by buying them a watch. Now in the post corruption world, is it back to bribing people with watches? Everybody has a watch now.

What the post corruption world looks like I have no idea. Because the factors that have fostered corruption are: One party rule, arbitrary rule, lack of accountability, lack of transparency. All those things are still in place. There is still a tremendous focus on who you know; the approval of an individual or a mayor. Why should corruption now go away?

If Xi keeps the pressure on, people will just not approve anything for fear of being implicated in corruption. You need systems that are better for accountability and transparency. That we are not seeing. Xi hasn’t shown he is changing the model in anyway.

Read about the size of China’s economy in part 3.

Fraser Howie is the author of three books on the Chinese financial system, including “Red Capitalism,” named a Book of the Year 2011 by The Economist magazine. For 20 years, he has been trading, analyzing, and writing about Asian markets. During that time he has worked in Hong Kong, Beijing, and Singapore for companies like Bankers Trust, Morgan Stanley, CICC, and CLSA.