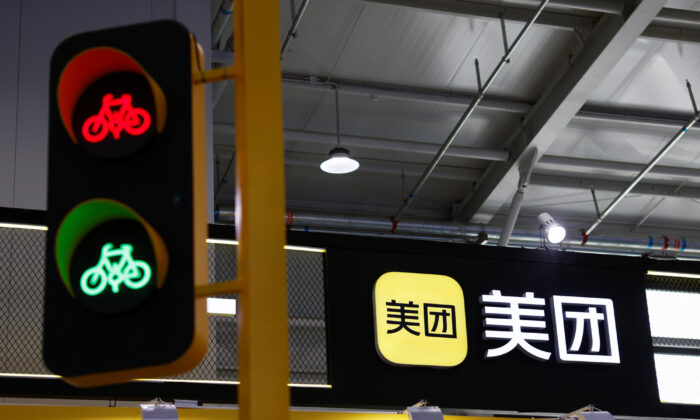 The logo of food delivery giant Meituan is seen at the 2021 China International Fair for Trade in Services (CIFTIS) in Beijing, China on September 3, 2021.  (Florence Lo/REUTERS)
China Business & Economy

Shares of China’s food delivery giant Meituan rebounded more than 8 percent on Oct. 11. The company’s financial penalty for violating the anti-monopoly regulations was lower than expected, and less severe than Alibaba‘s earlier this year.

With regulatory stings, China’s crackdown on some of its prominent tech companies has wiped hundreds of billions of dollars off their market value.

China’s State Administration for Market Regulation (SAMR) imposed a $528 million fine on Meituan on Oct. 8, equal to 3 percent of its 2020 domestic revenue. Meituan also has to fully refund exclusivity contract deposits of $202 million.

Meituan issued a statement saying that it “sincerely accepted” the penalty, will firmly implement the regulators’ instruction, and “take this as a warning” to operate in compliance with regulations.

Regulators launched an anti-monopoly probe at the end of April into the company’s business practices, including “pick one of two.” Namely, the company uses exclusivity arrangements to block restaurants from offering takeout delivery on other platforms.

Meituan once saw around $40 billion wiped off its value within two weeks when Beijing turned its regulatory scrutiny on the Chinese largest food delivery giant.

The company was also instructed to ensure delivery drivers’ legal rights, such as a base income, work safety, food safety, and access to insurance coverage.

In February, SAMR issued anti-monopoly guidelines that target internet platforms. In April it summoned 34 giants to a meeting in Beijing.

According to a statement after the meeting, the SAMR warned the companies to “be fearful and respectful of the rules and discipline themselves” in light of the Alibaba case.

For nearly a year, Beijing has been trying to rein in tech millionaires and bend their business models to fit Party leader Xi Jinping’s “common prosperity” campaign.