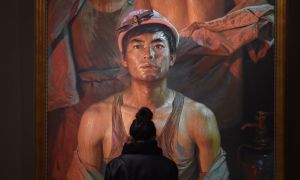 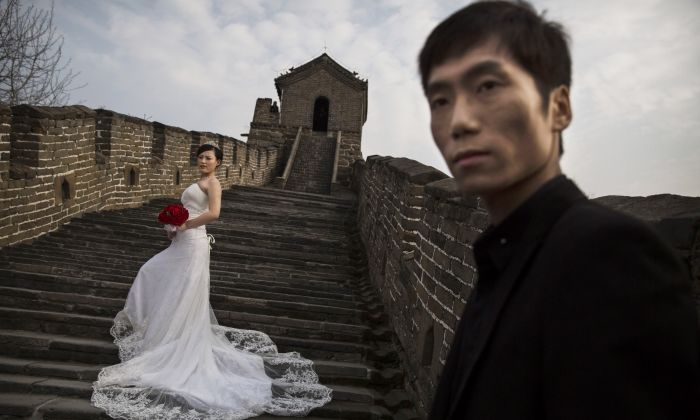 A Chinese bride poses for a wedding photographer as her groom looks on, on a section of the Great Wall of China near Beijing on October 28, 2014. China's marriage rate decreased continually for the past five years and reached the lowest point in 2018. (Kevin Frayer/Getty Images)
Social Issues

China’s marriage rate in 2018 was 7.2 per 1,000 inhabitants, representing the fifth consecutive year with a decline, according to recently published official data.

Although China’s recent marriage rates are higher than U.S. rates during the same period, the U.S. rate has incrementally increased in the past five years, according to U.S. census data.

Out of the entire country, Shanghai had the lowest marriage rate in 2018, at 4.4 per thousand.

At the same time, according to a report released by China’s Ministry of Civil Affairs in August 2018, China’s divorce rate has continually climbed in the past seven years.

One of the primary causes behind the high divorce rate is the prevalence of extramarital affairs, commonly seen among public officials.

Pan Suiming, a professor at Renmin University, published a survey result in May 2018, which showed that China had the greatest proportion of people engaged in extramarital affairs compared with other countries.

In Beijing and Shanghai, there are classes to train mistresses and potential mistresses how to perfect their art of seduction.

The state-run Beijing News previously reported that China’s average marriage length was 9.59 years in 2010, which is 0.7 years shorter than the average length just five years prior.

Why are more Chinese choosing not to get married? The Chinese Communist Party’s mouthpiece People’s Daily conducted an online survey of 33,330 single netizens, and published the results on March 20.

In today’s Chinese culture, young couples feel pressure to own an apartment before getting married. However, China’s soaring real estate prices have made it increasingly difficult for young couples to rent an apartment, let alone own one.

“I graduated from Peking University, the second best university in China, but I am still unemployed,” a bachelor’s degree graduate complained on social media recently.

Experts such as independent economist He Qinglian have explained how China’s unemployment rate is likely far higher than government estimates and would soon reach a crisis.