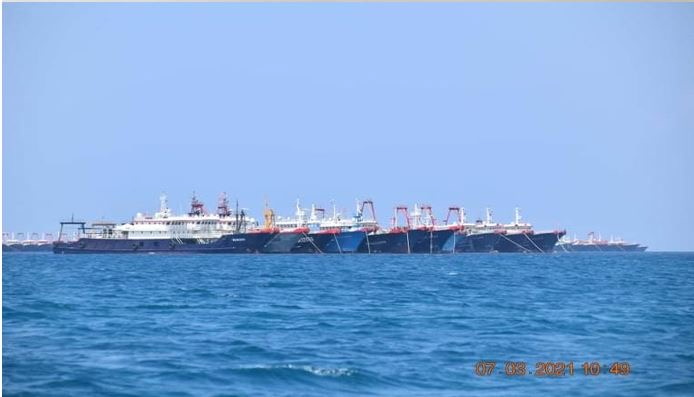 Some of the about 220 Chinese vessels reported by the Philippine Coast Guard, and believed to be manned by Chinese maritime militia personnel, are pictured at Whitsun Reef, South China Sea, on March 7, 2021. (Philippine Coast Guard/National Task Force-West Philippine Sea/Handout via Reuters)
Thinking About China

Despite Beijing’s disclaimers, China’s maritime militia is very real. It is composed of vessels that look like civilian fishing boats but are tasked with supporting the Chinese Navy in controlling the seas.

The sailors are called “Little Blue Men,” a play on “little green men from Mars.” When pressed for an explanation, the Chinese Communist Party (CCP) refers to them as the “so-called maritime militia.”

Seafood is key to China’s food security. China consumes 65 million tons of fish per year, which is 45 percent of the global volume. According to CCP official sources, China maintains the largest fishing fleet in the world, with 2,701 boats and ships. The London-based Overseas Development Institute, however, estimates that China deploys 187,000 fishing boats, including  17,000 vessels in distant-water operations.

At least 100 of these vessels and 1,800 sailors operate under the command of the People’s Armed Forces Maritime Militia (PAFMM). This subcomponent of the CCP armed forces is trained and equipped to support the People’s Liberation Army (PLA) in laying claim to islands, features, and waters in disputed areas.

Carl Schuster, former director of operations at the U.S. Pacific Command’s Joint Intelligence Center, told CNN that the boats have automatic weapons and reinforced hulls, and can achieve a top speed of around 18 to 22 knots, which is faster than 90 percent of the world’s fishing boats.

Additionally, the vessels are outfitted with Beidou navigation satellite systems to be independent of the GPS. An investigation by Radio Free Asia (RFA) discovered that many of the boats belong to the state-owned enterprise Sansha City Fisheries Development Co, Ltd., which has managed government projects involving classified national security data.

The boats carry cutting-edge communications systems, transforming them into mobile communications and surveillance platforms that can gather and transmit intelligence back to authorities in a remote location. The PAFMM can be used to track foreign vessels and U.S. aircraft, as well as surveil the shores of countries that are part of China’s Belt and Road Initiative (BRI, also known as “One Belt, One Road”).

Jay Batongbacal, director of the Institute for Maritime Affairs at the University of the Philippines, claims that the PAFMM plays a significant role in the CCP’s plan is to establish control over the entire South China Sea.

In April, the Philippine Coast Guard became suspicious when it observed the same 200 Chinese fishing boats sitting idle in the same location, near the Spratlys’ Whitsun Reef, a Philippine possession, for several weeks. According to the International Institute for Strategic Studies (IISS), the Whitsun Reef incident was the single largest gathering of Chinese fishing vessels ever.

The boats were not fishing and it is unlikely that legitimate fishing boats would just sit for a protracted period of time, doing nothing. As a result, the Philippine Coast Guard reported its suspicion—that these boats were actually on a covert military operation.

Confronted by the Philippine government, the Chinese foreign ministry and embassy in Manila denied the accusation that the suspicious boats were on a mission from China’s maritime militia. The People’s Republic of China’s Embassy in Manila actually issued a statement saying, “There is no Chinese Maritime Militia as alleged.”

Although some Chinese diplomats deny the existence of the PAFMM, its responsibilities have expanded tremendously. In 2013, Xi Jinping visited Hainan’s Tanmen Maritime Militia, in light of recognizing the role it played in the seizure of Scarborough Shoal. Major-General Gai Longyun, commander of the Guangdong military district, addressed the PAFMM sailors and said that “the maritime struggle is growing more urgent,” and that the state was exploring ways to strengthen the maritime militia. Additionally, military authorities called for the “mobilization forces,” such as militia, to participate in the “struggle” at sea.

In 2016, when the PLA was reorganized, the National Defense Mobilization Commission (NDMC) system was placed under the Chinese State Council and the PLA’s Central Military Commission, with a dual civilian-military command structure, tasked with overseeing and mobilizing the militia.

The PAFMM, supported by the Chinese Coast Guard, is used to enforce China’s territorial claims to 90 percent of the South China Sea, particularly, around the Paracel and Spratly Islands. China has also built 3,200 acres of new land, to further extend its territorial claims.

The CCP military operations in the Scarborough Shoal in 2012 were an excellent example of the regime’s maritime military strategy, using the PAFMM as the front line while reserving the Coast Guard and Navy as the second and third lines.

The PAFMM poses a particularly difficult problem for the United States. First, it consists of civilian vessels, so any actions against the militia by the United States or its allies would be considered an attack on civilians. For the claimants of the South China Sea and other disputed waters, the PAFMM represents a military force that they may not be able to defeat. Additionally, by engaging with the PAFMM, they would be risking retaliation by the PLA.

From a pure military and strategic standpoint, a U.S. Navy flotilla could destroy any number of boats it encounters. However, the sheer numbers of these small vessels would make them elusive. While the United States is engaging in one place, the PAFMM could be active in another. There is also fear that the Philippines, the country most threatened by the PAFMM, might engage with one of the boats, dragging the United States into a war with China.