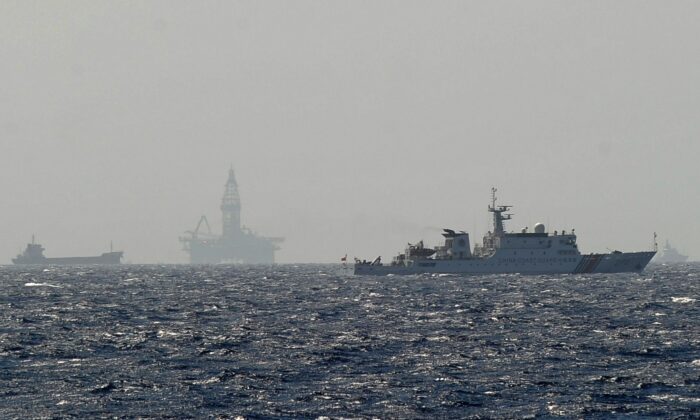 The expansionary claims of the People’s Republic of China (PRC) throughout the South China Sea have no legal merit, according to an interdisciplinary team of experts who recently conducted a study on the issue.

“In the name of enforcing its expansive and unlawful maritime claims in the South China Sea, the PRC is interfering with rights and freedoms, including navigational rights and freedoms, that are due to all states,” said Constance Arvis, acting deputy assistant secretary for oceans, fisheries, and polar affairs.

Arvis said that there was “no coherent legal basis” for the PRC’s claims of sovereignty over vast portions of the South China Sea. Further, the Chinese regime efforts to draw baselines through international territory and undersea were inconsistent with numerous internationally recognized laws and norms.

The comments came as part of a briefing by the State Department following the publication of a study that examined the legality of China’s maritime claims. The latest in the “Limits in the Seas” series, ongoing since 1970, which examines coastal states’ maritime claims and boundaries and the legal basis for them. An international tribunal in 2016 already rejected the vast majority of China’s claims over the South China Sea, a body of water that is also claimed by several other Southeast Asian states.

The U.S. study follows years of efforts by the PRC to forcibly eject other nations from sections of the South China Sea, including efforts to build artificial islands to expand its alleged borders and the increased use of maritime militia units to harass and intimidate smaller nations.

According to the study, the PRC asserts four separate categories of maritime claims in the region, including sovereignty over underwater features, the drawing of baselines that close off swathes of open sea, the use of maritime rather than land-based zones for measuring borders, and rather and so-called “historic rights” to the region.

“The United States unequivocally rejects these unlawful claims and any such interference,” Arvis said.

To that end, Arvis added that the Beijing’s expanding presence in the region would draw resistance from the United States and its allies.

“We are taking several actions to continue to push back against the Chinese activities in the South China Sea,” Arvis said.

“We definitely are not accepting a fait accompli and are calling on the PRC to change its behavior to conform its maritime claims and to cease its unlawful course of activities.”

The study on Beijing’s maritime claims and their legality continues a long trend in the State Department of publishing technical legal works for informing public policy on international maritime issues. Notably, it attempted to reconcile Chinese thinking on maritime policy with that of the greater international community.

“It was roughly two years in the making,” said Robert Harris, assistant legal advisor for the Office of the Legal Advisor.

“We tried to understand the PRC claim as best we could by going to primary sources: Chinese laws, regulations, formal utterances, and then trying to see what was the relevant international law.”

That research, according to Harris, included an “exhaustive analysis” of 23 coastal countries with historic or customary claims to various areas of ocean. According to that analysis, the study concluded that the PRC’s alleged historic right to the region was not well-founded.

The Chinese regime has not met those requirements, he added, noting that the PRC’s insistence that its so-called nine-dash-line that demarcates the space between it and Taiwan and other nations, simply did not lend to a valid claim to sovereignty over the region.

“Many, many countries are operating in the South China Sea and there’s nothing provocative about doing that.”

Jung Pak, deputy assistant secretary of state for East Asian and Pacific affairs, underscored that the Chinese regime did not only lack a legal basis for its historical claims to the South China Sea, but that it was actively violating the rights of other nations.

Its actions in harassing other nations’ ships and attempting to artificially inflate its territory “gravely undermine” the rule of law on the oceans, she said.

To that end, Pak affirmed that the United States would continue to support allies and partners such as Taiwan and Japan in maintaining a presence in the region and continuing the flow of international trade and maritime traffic through the South China Sea.

“The U.S. stands with the international community in defense of freedom of the seas, and the U.S. will continue to fly, sail, and operate wherever international law allows,” Pak said.

“Of course, we welcome our allies and partners to do the same.”