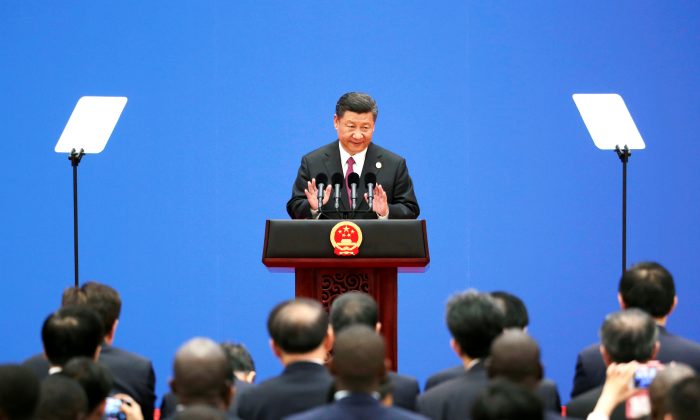 Chinese leader Xi Jinping attends a news conference at the end of the "One Belt, One Road" Forum in Beijing on May 15, 2017. (Jason Lee/Reuters)
Chinese Regime

The International Republican Institute published a new report that blames the People’s Republic of China (PRC) for a campaign of malign influences that corrode democracy.

The International Republican Institute (IRI) is the Washington D.C. think tank whose board, staff and consultants are drawn from the Republican Party establishment. IRI has tended to set the party’s foreign policy agenda for three decades. Although it has backed expanded China trade and ratifying Trans-Pacific Partnership before President Trump’s election, IRI’s newest report is titled: “Chinese Malign Influence and the Corrosion Of Democracy: An Assessment of Chinese Interference in Thirteen Key Countries.”

The new white paper represents a hard-turn for a Republican Party establishment that after President Nixon went to China in 1972, supported a series of international trade deals with communist nations. House Speaker Paul Ryan and former presidential candidate Sen. John McCain worked with IRI in 2015 to advocate for passing the Tran-Pacific Partnership (TPP) based on Peterson Institute projections of adding “$147 billion” of  annual global growth, and “quadruple to $632 billion” if China joined.

Despite most IRI funding coming from the U.S. Agency for International Development, National Endowment for Democracy and State Department, plus its Board dominated by so-called “Never Trump” Senators including Marco Rubio, Lindsey Graham, Joni Ernst, Kelly Ayotte and Mitt Romney, the Republican establishment now perceives China’s autocratic rule as a global democracy threat that must be contained.

According to IRI, China’s primary goal for developing world engagement is securing critical resources necessary to commercially sustain “its rapidly growing economy.” But the Chinese Communist Party (CCP) has begun “employing a unique set of tactics in the economic and information domains that undermines many developing countries’ democratic institutions and future prosperity as their dependence on China grows.”

The CCP has long used sophisticated influence tactics in the economic and information spheres to “systematically suppress political pluralism and free expression in China.” IRI warns that the CCP “is increasingly attempting to use similar practices abroad to manipulate internal political and information environments to its own benefit.”

The CCP preys upon developing countries’ need to expand trade through a set of malign influence tools that are reliant on negotiation and contract term “opacity.”

IRI believes that keeping negotiation and contract details from the public eye presents regular opportunities for massive corruption that is best described as a “feature” of OBOR contracts rather than a “bug.” Over time, this leads to the CCP’s “elite capture” of top leaders.

Open-ended access to Chinese credit has tended to encourage approval of projects with “dubious value.” A corruption fueled building spree in Ecuador led to siting a Chinese-financed dam next to a volcano, against the advice of geologists. Failing to generate projected electrical sales has undermined the nation’s economic prospects.

With Chinese loans not tied to traditional IMF democracy and governance requirements, so-called “illiberal actors” can take credit for delivering Chinese investment toward politically valuable regions and constituencies. In Pakistan, “corruption and political calculations have produced drastic disparities in Chinese investment across provinces.”

IRI is especially concerned regarding the length the CCP goes to: “ensure greater control over developing countries’ internal narratives about their relationships with China, including by suppressing criticism of Chinese activities within their borders.”

The CCP has directly invested in “cash-strapped media companies” throughout the developing world to gain hard power over broadcasting and newspaper content. But the CCP also focuses on soft power investments to gain narrative influence over think tanks, universities and nongovernmental organizations. Such efforts also play an important role in finding partners to “squelch anti-China narratives.”

The International Republican Institute is advocating that Republican foreign policy should be committed to containing “CCP’s aggressive influence campaign that “undermines vital strategic interests for the United States and its democratic partners.”

IRI trumpets the need to “raise awareness of CCP influence tactics within private enterprise, academia, and government, and bolster the capacity of civil society, political parties, and independent media to expose and counter such tactics.”

After decades of passively supporting free trade with un-free communist nations, IRI now calls for a campaign by the United States and its allies to counter CCP’s malign advocacy for autocratic rule by investing in spreading democracy across disadvantaged nations.