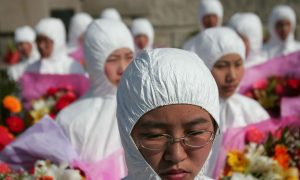 A popular Chinese blogger known for being critical of the United States has been put in charge of a new China writers’ group believed by some to be a regime propaganda body. The move represents a new attempt by Chinese authorities to promote a vociferously pro-regime voice in the age of the Internet, when the Communist Party has come under unprecedented public pressure for corruption and misgovernance.

Zhou, a slim, bespectacled, black-clad, 34-year-old blogger, rose to fame in October last year when he was publicly praised by Chinese leader Xi Jinping in a conference on art and literature. Xi said Zhou and another conference participant should continue writing articles that carry “positive energy”—official parlance for statements that stick to the Party line.

There’s plenty of “positive energy” in Zhou’s works—most extol the virtues of the Chinese regime and whitewash its flaws, or spread anti-Western, and particularly anti-American sentiment.

“No other country is unjustly accused more than today’s China. More than 80 percent of voices on the Internet are critical of the government; how is there no freedom of expression in China?” argued Zhou in his most famous piece, “Please Do Not Fail This Era.”

“In 2003, SARS (severe acute respiratory syndrome) in China killed hundreds of people, and people said you couldn’t live in China. But do you know that in the same year, there was an influenza outbreak in the U.S., and it killed nearly 50,000 people in a few months?” Zhou wrote in another article.

Zhou’s use of facts and figures could convince in a cursory reading, but have little substance when critically probed.

The Chinese regime allows dissenting voices on issues that won’t undermine its legitimacy, but clamps down mercilessly on those who defend the Tiananmen student protests or Tibetan independence, for instance.

Zhou’s use of facts and figures could convince in a cursory reading, but have little substance when critically probed.

Also, the regime is notorious for covering up the SARS crisis and setting a “death allowance” number for victims of natural calamities each year. While Zhou is quite accurate on U.S. flu death figures in 2003 (48,614), the Centers for Disease Control and Prevention doesn’t censor its statistics in an outbreak.

Given Zhou’s propensity for writing positively about the Chinese regime while badmouthing its perceived rivals, many have labeled him a “royal fifty-cent” and compared him unfavorably to Yao Wenyuan and Zhang Chunqiao—two members of the infamous “Gang of Four,” a radical Maoist group partly responsible for the excesses of the tumultuous Cultural Revolution from 1966 to 1976.

Indeed, the appointment of Zhou as head of the new online writers’ association is proof enough that it is another “fifty cent party” or “wumao dang” front, Chinese Internet freedom advocate Li Hongkuan told RFA.

“Zhou has been coined by China’s Propaganda Department as a ‘positive energy’ writer because he has unconditionally supported the regime’s policy and propaganda,” said Li, the former editor-in-chief of VIP Reference (Dacankao), the first major overseas electronic newsletter in Chinese. He added that “Zhou himself is not a good writer at all.”

But Zhou’s writings are good enough for the Chinese regime: a Chinese publisher is planning to release a book featuring many of Zhou’s articles, and he was made executive director of the central youth media association of the Communist Youth League in December 2014.

There is virtually no information available about the Sichuan China Online Writers Association—the third provincial online writers’ association in China after one in Zhejiang and Shanghai—its membership, or its mission.

Zhou, however, offered a sliver of information in an interview with a state-run publication Sichuan Online: “We’re in close contact with overseas student bodies, and we hope to encourage outstanding members to step out and broaden the international perspective of us Internet writers.”