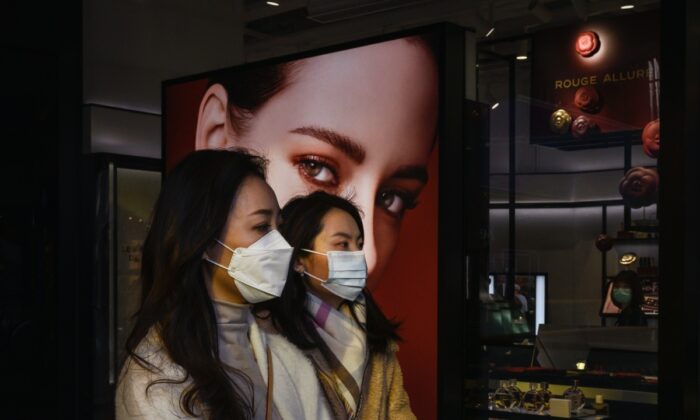 Chinese women wear protective masks as they walk by a luxury store while shopping in Sanlitun on March 10, 2020 in Beijing, China. (Kevin Frayer/Getty Images)
Analysis

China’s luxury market is surging at a double-digit rate and is expected to become the world’s largest luxury goods market within three years. Meanwhile, the Gini index (an income distribution marker) has exceeded the warning line of 0.4 set by the United Nations, signaling that the gap between the rich and the poor continues to widen, latest data reveals.

“The luxury market in China: 2021 a year of contrasts” a Jan. 20 report by Bain & Company, a consulting company based in the United States, indicates that despite increasing global, social, and economic challenges, China’s luxury market has bucked the trend and grown strongly in the past two years. It increased by 48 percent in 2020 and 36 percent or to 471 billion yuan (about $74 billion) in 2021, doubling in just two years.

The sharp uptick of the luxury market, partly due to the COVID-19 epidemic making it difficult for Chinese to travel abroad and boosting shopping at home, will continue to push China into the world’s largest luxury market by 2025, the report said.

According to data in the annual report, the sales of leather goods grew the fastest, at about 60 percent, the second was fashion with a growth rate of about 40 percent. Jewelry sales grew by 35 percent, while high-end watch sales increased by about 30 percent, and luxury beauty spending rose by about 20 percent.

It is not surprising that the luxury market in China is in full swing, people frequently see long queues outside stores like Cartier, LV, Prada, Gucci, and Hermes in major cities for a single commodity that costs thousands or millions of RMB. The second-hand luxury market is also booming, as a Hermes Kelly28 crocodile was on sale for up to 280,000 yuan (about $44,000) according to JD, a Chinese e-commerce site.

In stark contrast to wealthy Chinese consumers spending their money in luxury stores, Wu Huayan, an underweight girl in southwestern China’s Guizhou Province, stands out. According to The New York Times, 24-year-old Wu was a university student but weighed less than 23 kg (51 lb.) and was only 135 cm (53 in.) tall. In order to save money for her brother’s medical treatment, Wu often ate only rice and chilies, leaving her in a state of chronic malnutrition that affected her heart and kidneys. Wu died on Jan. 13, 2020.

Ning Ji Zhe, director of China’s National Statistics, said in September 2021 that China’s Gini index in 2020 was 0.468, a rise from 0.465 in 2019, and reflecting a deteriorating state of wealth distribution between rich and poor in China.

China’s per capita income is only about a quarter of the average found in high income countries. Hence, 26.6 percent or about 373 million Chinese, in a population of 1.4 billion, still live below the upper-middle-income poverty line of $5.50 a day according to an Oct. 2021 report by United Nations Children’s Fund.

China’s Premier Li Keqiang said at a press conference at the third session of the 13th National Congress in May 2020, there are 600 million people in China living with middle-low incomes, and their average monthly income is less than 1,000 yuan (about $157).

China has a lot of poor people, so why is its luxury market still among the top in the world? Wang Jun, the former director of the international department of Unirule Institute of Economics in Beijing, told The Epoch Times that it is because China’s population base is quite large.

In China, speculators who are rich tend to show off their wealth. Wang, who lived in Germany for years, found that the latest German luxury cars are most often seen not in Germany, but in China.

“Even Audi Q7 is rare in Germany,” he said, “The Germans are big and should drive big cars, but they don’t care about this, they are spending their own money. However in China, many people drive luxury cars, where does his money come from? Even if it is his own, there is somehow showing off.”

Wang Jun called the phenomenon of Chinese people chasing luxury goods a kind of “social psychology” of boomers, while Europe and the United States do not have this phenomenon.

In China, corruption among communist party officials has contributed to the rise of the luxury market. In recent years, reports have emerged of corrupt Chinese officials that have amassed vast amounts of property and money.

One typical case is Gu Junshan, former deputy head of the general logistics department of the People’s Liberation Army, who owned more than 30 suites in a prime location in Beijing. In Shanghai, Gu sold a piece of army land for more than 2 billion yuan (about $320 million) from which he took a 6 percent kickback. Beijing authorities seized, from Gu’s home in Puyang city, Henan Province, hundreds of cases of Maotai wine, a famous Chinese luxury item, along with gold and other valuables that filled four trucks, according to Sina, Chinese media, on April 6, 2014.

On March 18, 2012, Xing Libin, chairman of Liansheng Group, spent $70 million yuan (about $11 million) on a phenomenal wedding for his daughter in Sanya, Hainan Province. Some of the extravagances included inviting many celebrities to perform, chartering five-star hotels such as the Hilton and Marriott, and chartering three planes to transport guests.

Xing is the richest man in Liulin, Shanxi Province with assets of over 10 billion yuan ($1.57 billion). His astonishing wealth is considered to have come from collusion between his business and local authorities. Xing purchased all the shares of state-owned Xingwu Coal Mine for the low price of 80 million yuan ($12.58 million). Official information shows that mineable reserves of the mine are 140.212 million tons. Calculations based on this data show that Xing paid only 0.57 yuan ($ 0.08) per ton of coal, which is really a “cabbage price,” said Southern Metropolis Daily.