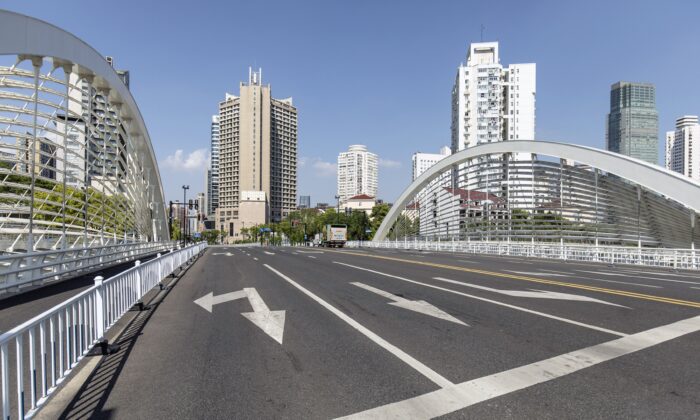 A nearly-empty road during a lockdown due to COVID-19 in Shanghai, China, on May 5, 2022. (Source: Bloomberg)
Thinking About China

China’s Lockdowns Are Destroying Its Economy

Not one vehicle was sold in Shanghai in April, according to the Shanghai Automobile Sales Association on May 16. This is a direct result of lockdowns in which citizens no longer need their cars—and can’t afford them anyway.

Stella Yifan Xie at The Wall Street Journal, who covered the latest data from China, wrote that it is “further evidence of the economic damage unleashed by the country’s strictest pandemic containment measures in more than two years.”

The regime’s decision to keep lockdowns is political and has global economic effects. According to Moules, Chinese leader Xi Jinping “has reaffirmed his commitment to the policy as the tool to eradicate Covid ahead of his bid for a third term in power later this year, but it is expected to have deep ramifications, not just for China but for global supply chains.”

The disastrous economic effects of the “zero-COVID” strategy, and the failure of China’s health system to combat COVID effectively, are putting Chinese citizens under tremendous pressure.

The latest modeling predicts that 1.6 million Chinese will die and 2.7 million will be put into intensive care over just three months of summer if lockdowns are removed. This would exceed the number of intensive care beds by 15 times.

Yet continuing the lockdown without increased and improved vaccinations appears to be only slowing rather than eradicating transmission.

Due to the mutation of the coronavirus into more contagious yet less lethal forms, WHO Director-General Tedros Adhanom Ghebreyesus said last week that China’s “zero-COVID” strategy was unsustainable. He called for a shift in approach, but the Chinese Communist Party (CCP) censored his comments.

Xi’s stubborn attachment to lockdowns is now causing resentment and protests by Chinese citizens. And one can understand why.

In Beijing’s largest district of Chaoyang, the regime forced its 3.5 million residents to complete 17 rounds of COVID-19 tests over the last three weeks. That’s almost one test per day per person.

A culture that should be thriving because of the intelligence and vivacity of its people is instead controlled to the point of paralysis. And if it weren’t paralyzed, it would be channeled for the malign purposes of the CCP.

While Xi publicly congratulated himself a few months ago on the “success” of lockdowns, a prior variant of COVID was mutating into Omicron. The Chinese people were not getting the mRNA vaccines that would prove effective against Omicron because Xi cannot admit that Western technology is superior to homegrown Chinese vaccines based on outdated technology.

Neither can Xi admit that lockdowns are failing against Omicron because he wants an unprecedented third term as “Chairman of Everything,” the new derisive name for this ignorant leader who has taken the helm of almost every portfolio, including the economy.

“From Mao to Deng and now to Xi, the Chinese communist system has produced and prolonged astonishing levels of ignorance in Party leaders,” according to Yu in the Taipei Times.

“Killing sparrows and professors is asinine; backyard steel furnaces are stupid; building aircraft carriers without capable offensive airwings is ridiculous. But over the last several years, Chinese leaders’ ignorance has only got worse.”

According to Yu, the absolute power acquired by the CCP has bred corruption, arrogance, and ignorance, leading to China’s downfall. In a word, hubris.

The supposedly market-minded and practical Premier Li Keqiang is being given more public responsibility for the economy. Still, he will be stepping down this year and could, in the meanwhile, be set up as a fall guy who greases the skids of Xi’s further ascension.

Unfortunately, Xi’s hold on power, and the “zero-COVID” strategy, look just as entrenched as ever.