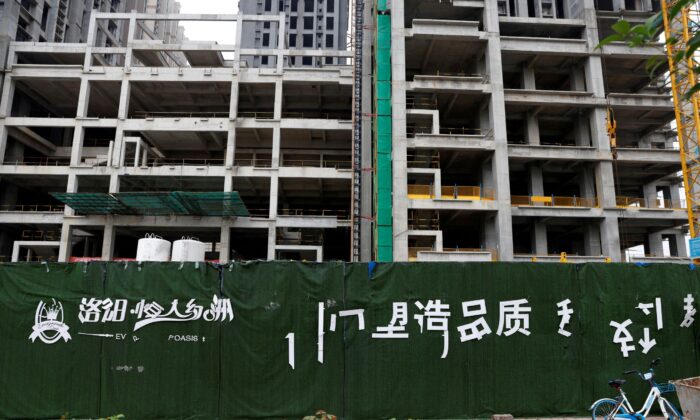 A peeling logo of the Evergrande Oasis, a housing complex by Evergrande Group, outside the construction site of the unfinished residential buildings in Luoyang, China, on Sept. 16, 2021. (Carlos Garcia Rawlins/Reuters)
China Business & Economy

The Chinese real estate market collapsed in July with all indices falling. An expert predicts that the real estate plunge, together with the economic slowdown, will lead to a financial shortage of 6 trillion yuan (about $889.6 billion) for local governments for the year, as the local governments’ revenues from land sales may be halved this year.

According to a report released by Shanghai Securities on July 18, between July 4 and July 18, 3.923 million square meters of land for planned development were sold in 100 large and medium-sized cities, a cumulative year-on-year fall of 61.58 percent; and property sales in 30 large and medium-sized cities amounted to 2.42 million square meters, a cumulative year-on-year drop of 36.46 percent.

Lu explained that developers delivering unfinished high-rise buildings to home buyers have become a nightmare for the buyers, and the main reason for the decline in new home sales.

On July 13, Bloomberg quoted Citigroup’s latest analysis of China real estate, which claimed that 35 real estate projects in 22 Chinese cities are either unfinished when delivered to pre-sale buyers or losing value upon completion, and the new owners have decided to stop paying home mortgages, as a way of protest.

Homebuyers in China have recently stopped mortgage payments on at least 100 projects, after moving into unfinished dwellings from cash-strapped developers. These projects are located in numerous provinces and cities in Eastern, Northern, and Southern China, including Henan, Shanxi, Jiangsu, Jiangxi, Hunan, Hubei, Guangxi, Shanxi, and other provinces. Even some of the “internet star” development projects, including a few projects that were completely sold out the first day of sales, were delivered to pre-sale buyers as uncompleted.

Lu said buyers refusing to pay their mortgages would cause the vicious cycle to worsen. Potential buyers are afraid that they may end up buying homes in buildings that are never completed; the plunge in new property sales will worsen the cash flow crisis for developers; local governments will then further tighten the pre-sale regulation, which in turn, will further worsen developers’ cash flow.

“In the end, the developers won’t have enough money to buy land, causing land prices to fall. Subsequently, home prices will fall below expectations, and new home sales will be affected,” Lu predicted.

However, “civil servants are one of the primary drivers of home purchases in many small and medium-sized cities,” Lu said. “Salary cut for this group of people, coupled with an extremely high unemployment rate among young people, lead to the situation where many people are unwilling to buy homes if they need to rely on mortgages. The real estate industry will likely continue to deteriorate because of buyer hesitancy.”

Lu estimates that the local governments’ cumulative land sales revenue will decrease by about 40-50 percent this year. Based on his estimate, on the conservative side, local governments’ revenue from land sales may be 3.5 trillion yuan (about $518.9 billion) lower than the previous year. When combined with the financial impact of the recession, Lu estimates that the fiscal gap for this year could be 6 trillion yuan (about $889.6 billion).

“The real estate industry and its upstream and downstream industrial chains account for one-fourth of China’s GDP,” Lu remarked. “Therefore, if you want to analyze the future economic trend of China, it is necessary to understand the trend in real estate. For the past 20 years, whenever the economy was struggling, Chinese authorities would loosen restrictions on real estate to stimulate the demand for housing and real estate investments.”