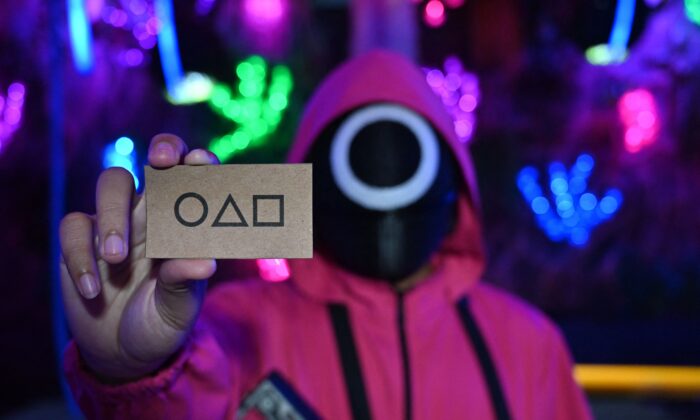 A waiter dressed in an outfit from the Netflix series "Squid Game" holds a card while playing a game to attract customers at a cafe in Jakarta on Oct. 19, 2021. (Adek Berry/AFP via Getty Images)
Social Issues

While both the report and Chinese netizens ridiculed the show for blatant plagiarism, one analyst pointed out the danger of being creative in modern China.

Youku published promotional posters for the new show on Oct. 20, showing a similar color scheme and artistic style compared to the original Korean version. The focus of the show further included challenges based on a contestant’s intelligence and physical strength in the theme of childhood games.

After online criticism, Youku issued an apology, removing designs similar to the Korean show. They renamed the show “Game’s Triumph,” and removed artistic semblance to the original.

Although Netflix has not yet been allowed to enter the Chinese market, a large quantity of bootlegs of the “Squid Game” has been distributed online. Meanwhile, the masks, costumes, food, and other related products featured in the drama were mass-produced in China and were not only sold in Chinese e-commerce stores like Taobao, but also found on overseas sites such as eBay.

The wave of knock-off entertainment and merchandise is a byproduct of the Chinese Communist Party’s (CCP) influence, according to Wen Rui, a Chinese current affairs commentator.

“If you want to create something that everyone likes, you often have to reveal the darkness and various problems of the whole society. But in China, you cannot touch these things,” Wen said.

According to Wen, Chinese people lack freedom of creativity under the CCP. He said that if one comments on society in any truthful or objective way, they will be arrested. “I think this is one of the core reasons why people don’t touch this stuff, so what you do is not attractive.”

“Basically there is no protection for intellectual property rights in China,” Wen added. “If you create something, someone will copy it right away.” Gradually, plagiarism is considered as “reducing time and capital investment, and making money fast.”

“In that case, who would create the original product? It’s in vain. So everyone has lost the desire to create, and they all want to play tricks and copy others,” he said.

Daniel Holl contributed to this report.