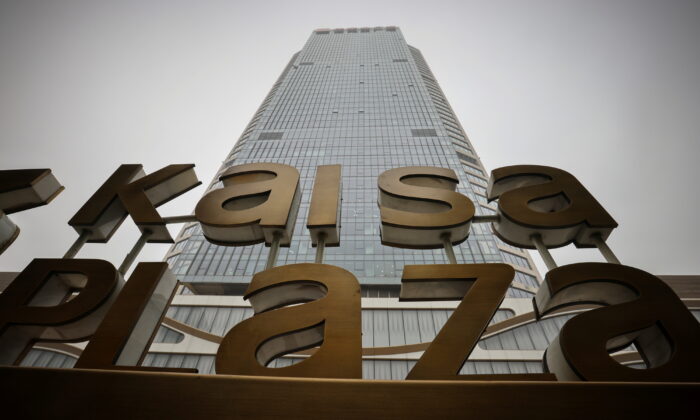 HONG KONG—China’s Kaisa Group Holdings Ltd. said on Thursday it wants to extend the maturity of a HK$3.118 billion ($400 million) bond by a year and a half—part of the property developer’s efforts to avoid a messy default and resolve a liquidity crisis.

In a filing, Kaisa said it would exchange its 6.5 percent offshore bonds, due Dec. 7, for new notes, due June 6, 2023, at the same interest rate if at least 95 percent of holders accept.

Kaisa, which has the most offshore debt among Chinese developers after China Evergrande Group, missed coupon payments totalling HK$689.3 million ($88.4 million) due on Nov. 11 and 12. The payments have a 30-day grace period.

Shares in Kaisa, which resumed trading after suspension on Nov. 5, were up 18 percent in afternoon trade with investors cheered by the firm’s attempt to solve payment problems.

Kaisa said a sharp downturn in the financing environment has limited its funding sources to meet upcoming maturities.

“If the exchange offer and consent solicitation are not successfully consummated, we may not be able to repay the existing notes upon maturity on Dec. 7, and we may consider alternative debt restructuring exercise,” it said in the filing.

Chinese developers are facing an unprecedented liquidity squeeze due to regulatory curbs on borrowing, causing a string of offshore debt default, credit-rating downgrades and sell-offs in developers’ shares and bonds.

It recently sold a land parcel in Hong Kong to a local investor for HK$3.78 billion ($484.82 million), recovering around HK$1.3 billion ($166.7 million) cash after repaying the loans it borrowed for the land, Reuters reported this week. Kaisa is also selling another land plot in the city.

“Providing solutions and more clarity to the market is positive; afterall Kaisa’s fundamentals are good, if it manages to strike a deal with creditors it can repay bit by bit to get past this crisis,” said Kington Lin, managing director of Asset Management Department at Canfield Securities Limited.

The developer, in a separate filing late on Wednesday, said it aims to accelerate the disposal of real estate projects and other high-quality assets to improve liquidity.

Having missed payments on onshore wealth management products totalling 1.5 billion yuan ($234.80 million) due in October and November, Kaisa said it implemented repayment measures for 1.1 billion yuan ($217.98 million) and is negotiating the remainder with investors.

The developer also said “certain members of the group” did not meet repayment obligations under finance agreements involving bank loans and other borrowing, and that it is formulating an overall repayment plan.

Other cash-strapped developers including Evergrande, the world’s most indebted developer which has been stumbling from deadline to deadline in recent weeks as it grapples with more than $300 billion in liabilities, are also negotiating with their creditors and scrambling to raise funds.

“Companies want to buy time, while creditors want to recover their money. Accepting an extension is better than calling the companies bankrupt and getting nothing back,” said Lin.

Smaller rival Fantasia Holdings said on Wednesday it has reached an agreement with holders of a 1.5 billion yuan ($234.87 million) onshore bond maturing in 2023 to pay 20 percent of a coupon due on Thursday, and the rest a year later.

But, media reported that an extension resolution for another onshore bond due in 2023 worth 2.5 billion yuan ($391.46 million) failed to pass on Wednesday.

Fantasia has missed payment of $205.7 million offshore notes that were due Oct. 4.

Separately, Rating agency Fitch downgraded on Wednesday China Aoyuan’s credit rating to “CCC-” from “B-,” reflecting the reduced chances that the firm will be able to refinance its $688 million offshore bond due January 2022.

Aoyuan said on Monday it has extended the redemption date of onshore asset-backed securities worth 816 million yuan ($127.77 million) and engaged Admiralty Harbour Capital Limited and Linklaters as advisers to assess the company’s capital structure and talk to creditors.

Shares of Fantasia were flat, while Aoyuan and Evergrande edged up 2.3 percent and 0.7 percent, respectively. The Hang Seng Index was flat.

By Clare Jim and Sameer Manekar