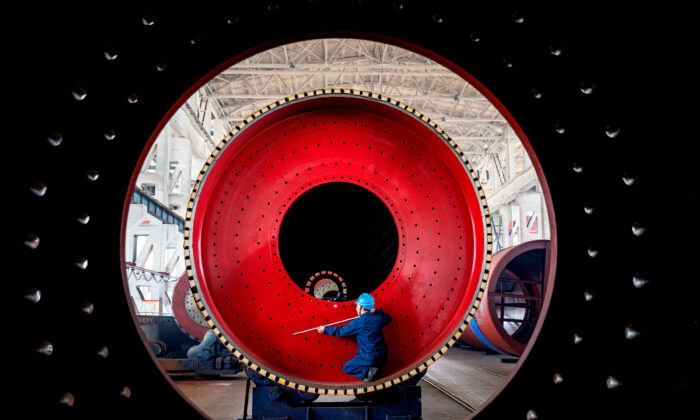 An employee measures a newly manufactured ball mill machine at a factory in Nantong, Jiangsu Province, China, on June 28, 2019. (Stringer/Reuters)
By Reuters

SINGAPORE—Growth in China’s sprawling manufacturing sector likely stalled in January after two months of modest gains, with an outbreak of a new virus adding to risks facing the already struggling economy, a Reuters poll showed.

The coronavirus outbreak prompted widespread transport curbs and tough public health measures that are weighing heavily on the travel, tourism and retail sectors.

The official Purchasing Managers’ Index (PMI) for January is expected to fall to a neutral 50.0 from 50.2 in December. The 50-mark separates expansion from contraction on a monthly basis, according to the median forecasts of 29 economists. The data is expected to be released on Jan. 31.

China will also release a similar survey on activity in the non-manufacturing sector, which may give a better reading of the initial economic damage. Shops, restaurants and movie theaters are expected to see a slump in sales as people avoid crowded areas.

The timing of the long Lunar New Year holiday, which began on Jan. 25 this year, had already been expected to dampen factory activity to some extent after a stronger-than-expected showing in December.

Many businesses cut back operations or shut completely for a week or more to allow millions of workers to return home for celebrations, and authorities have extended the break by several days this year in a bid to contain the virus.

Health officials say it is too early to know just how dangerous the coronavirus is and how easily it spreads, but some analysts say the blow to the economy could be similar to that seen during an outbreak of Severe Acute Respiratory Syndrome (SARS) in 2002-03.

“Even if the coronavirus outbreak is brought under control quicker than SARS was in 2003, the economic impact now looks likely to be of at least a similar scale,” Capital Economics said in a note to clients this week.

“We estimate that SARS lowered China’s growth by three percentage points in the worst-affected quarter, though the economy soon bounced back.”

Much of the “lost” spending during SARS was recouped by early 2004, workplaces generally stayed open and industrial activity was not affected, the consultancy noted.

China’s economic growth is already near 30-year lows. It softened to 6.0 percent last year from 6.7 percent in 2018 under pressure from weak domestic demand and the escalating Sino-U.S. trade war.

But there were signs late last year that businesses were getting back on more solid footing, as the economy slowly responded to a series of stimulus measures.