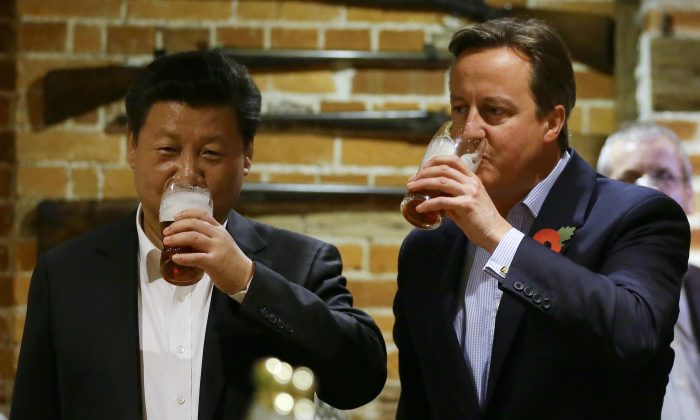 China's leader Xi Jinping and Britain's Prime Minister David Cameron drink a pint of beer during a state visit to the United Kingdom. Deals estimated to be worth £30 billion were agreed during the visit. (Kirsty Wigglesworth/WPA Pool/Getty Images)
China

Trade and investment deals between China and the UK, many of which have been foreshadowed for weeks, were finally sealed during Chinese president Xi Jinping’s visit to the UK. Estimated to be worth around £30 billion spread over a number of years, they cover a diverse range of industries from energy and healthcare to new technologies and the arts. While good for the economy, they are not being universally acclaimed.

In most cases, it is not the scale or nature of the investments that is of concern. Nor is it the four days of razzmatazz and excess that accompanied President Xi’s visit. It is China’s abysmal human rights record, brought to the fore last week by the persistence of spiritual practice Falun Gong, Free Tibet, and others who told stories about people in China who have been illegally imprisoned, tortured, and, worst of all, killed for their organs. It is also the missed opportunity, on the part of the UK government, to publicly raise the issue last week.

“The government has made this calculation, which is a false one, that any concern about human rights will damage investment and trade,” said David Mepham, UK Director of Human Rights Watch. “This is morally wrong and also politically short-sighted to think that all of these issues can be swept away and you can just have a conversation with the Chinese about investment. That’s not going to be good for China and the Chinese people, and it’s not going to be good for Britain and the British people.”

In countries that are more outspoken about human rights, like the US, it is not evident that China is turning its back on them. Quite the contrary. For the past decade, from 2005 to June this year, the US was the top destination for Chinese contracts and investments, receiving $93.2 billion (about £61 billion), according to data from the American Enterprise Institute (AEI) and the Heritage Foundation, think tanks based in Washington, DC.

Over the same period, the UK was the number one destination in the European Union for Chinese investments, receiving $29.2 billion (£19 billion), which puts it in eighth position worldwide after the US, Australia, Canada, Brazil, Nigeria, Indonesia, and Russia. Taking a wider view, the UK is also the top destination for all foreign direct investment in Europe, according to data for 2014/15 from government department UK Trade & Investment.

A Snapshot of Chinese Investment in UK Companies

An indication of where some of the Chinese investment was destined can be seen from the above table, which shows Chinese (including Hong Kong) investment in UK companies. Already the Chinese have substantial holdings in:

“My worry is that China is now a giant and they rule by the force of the gun, and if you disagree with them, God help you”
— Fabian Hamilton, MP

In short, the UK is an attractive investment prospect. It should not be bullied into submission on human rights by the Chinese government, according to Labour MP Fabian Hamilton. “My worry is that China is now a giant, some would say a monster, and the leadership is unaccountable to anyone – they have never been elected, they have no mandate, and they rule by the force of the gun, and if you disagree with them, God help you,” he said.

This is in stark contrast to the UK’s values and principles of freedom, justice, and rule of law, which are trumpeted around the world, he added. “We have to stand up for what we believe in and, if there is a price to pay for that, so be it. It seems that the government wants the money and doesn’t care about anything else.”

The main focus of last week, however, was firmly fixed on China’s billions of pounds of spending, which look set to keep the UK in the lead position in the European Union for Chinese inward investment. The biggest single project – valued at £6 billion – was for the construction of a nuclear power plant at Hinkley Point in Somerset, in which state-owned China General Nuclear (CGN) will take a 33.5 per cent stake. France’s EDF will retain a majority shareholding.

In addition, tens of other smaller joint trade and investment deals were cemented during President Xi’s visit. Many involve British flagship names, including:

China’s investment, not only in the UK but around the world, will continue. The country is rich in foreign exchange with sovereign wealth funds valued at more than $1.3 trillion managed by state-owned enterprises like China Investment Corporation, State Administration of Foreign Exchange (SAFE), and SAFE’s wholly owned unit Gingko Tree Investments, all of which feature as investors in UK companies in the above table.

With the prospect of a more powerful China, how can human rights defenders make their voices heard and bring about change? MP Fabian Hamilton suggested: “If every country in the world stands up to China, then where is China going to invest?”